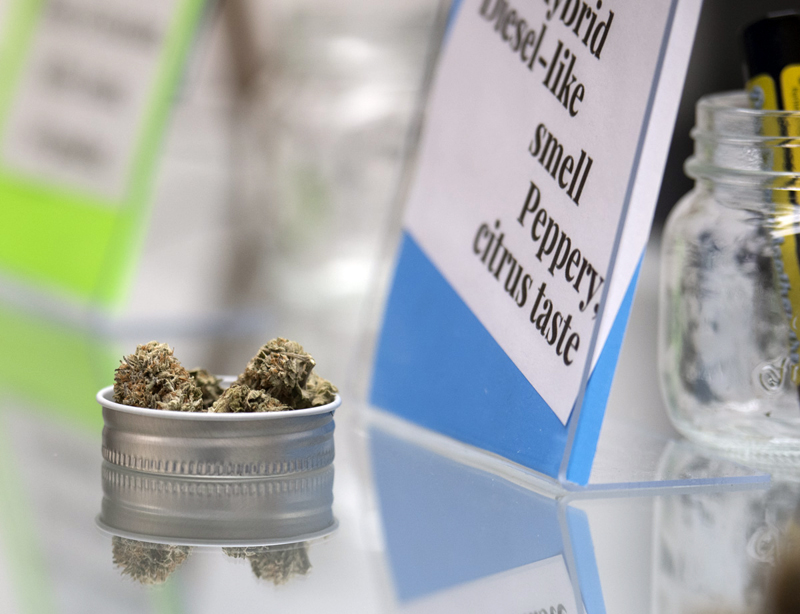 Cannabis fills a tin at Above and Beyond in Damariscotta on Saturday, Oct. 17. The new medical cannabis shop grows most of its product locally. (Bisi Cameron Yee photo)

A Bremen father and daughter duo, both licensed medical cannabis caregivers, have branched out to open Damariscotta’s second and final medical cannabis storefront, Above and Beyond Cannabis LLC.

Charles and Danielle Simmons opened the storefront in the Main Street Centre plaza at 464 Main St., across from Hannaford Supermarket, Friday, Oct. 16.

Danielle Simmons said Saturday, Oct. 17 that the store saw a lot of foot traffic and served 16 patients on its first day in operation.

To gain access to the bud room, one must be 18 years old or older and have a valid medical marijuana card issued by the state of Maine. Per Maine law, several other states’ medical cards qualify in Maine shops as well.

Without a medical card, patrons shopping in the smoking accessories section must be 21 or older.

Cannabis flower, the dried bud that patients smoke, is served “deli-style” by the gram.

For the moment, the store only has THC-containing products, but the store plans to stock several non-psychoactive CBD items, including dog treats, going forward.

On Saturday, Oct. 17, the store had two cannabis strains grown by the store owners and four strains from other growers available.

In addition to the flower, Above and Beyond offers THC concentrates that are typically vaporized, cartridges for vape pens, and edible products like drinks, ice cream, and gummies.

THC is the ingredient that makes a user feel high, while CBD is non-psychoactive and does not require a medical card to purchase. Both are cannabinoids that occur naturally in the cannabis plant.

The National Center for Complementary and Integrative Health, a division of the U.S. Department of Health and Human Services, states on its website that cannabinoids may be helpful in treating certain rare forms of epilepsy, nausea and vomiting associated with chemotherapy, and loss of appetite and weight loss associated with AIDS.

“In addition, some evidence suggests modest benefits of cannabis or cannabinoids for chronic pain and multiple sclerosis symptoms,” the site says.

However, cannabis remains illegal at the federal level and is classified as a Schedule I drug by the U.S. Drug Enforcement Administration, which means it “has no currently accepted medical treatment use in the U.S.”

In Maine, anyone 18 or older can obtain a medical marijuana card for a wide range of health conditions.

Danielle Simmons said her father, a fisherman, started growing medical cannabis after learning of its medical benefits and became especially passionate about it after his daughter, Danielle’s sister, died of cancer.

Charles Simmons has been a medical cannabis caregiver for about six years, starting with six patients whom he served from his grow location, the maximum number allowed for one caregiver under Maine law at the time.

Danielle Simmons, who became a caregiver two years ago, said that after the limit was lifted on the number of patients a caregiver could have, it soon became clear that a storefront would be the next step.

“Now we can have as many patients as we want. … This is a location where they can come and they can feel secure and buy their product and it’s all done through the system,” Danielle Simmons said.

Above and Beyond is currently open seven days a week from 10 a.m. to 6 p.m. The store offers a 10% discount to veterans and has different deals each day.

Above and Beyond is the second and final medical storefront in Damariscotta, joining Greenport Cannabis Co. If one closes, another could open with town approval.