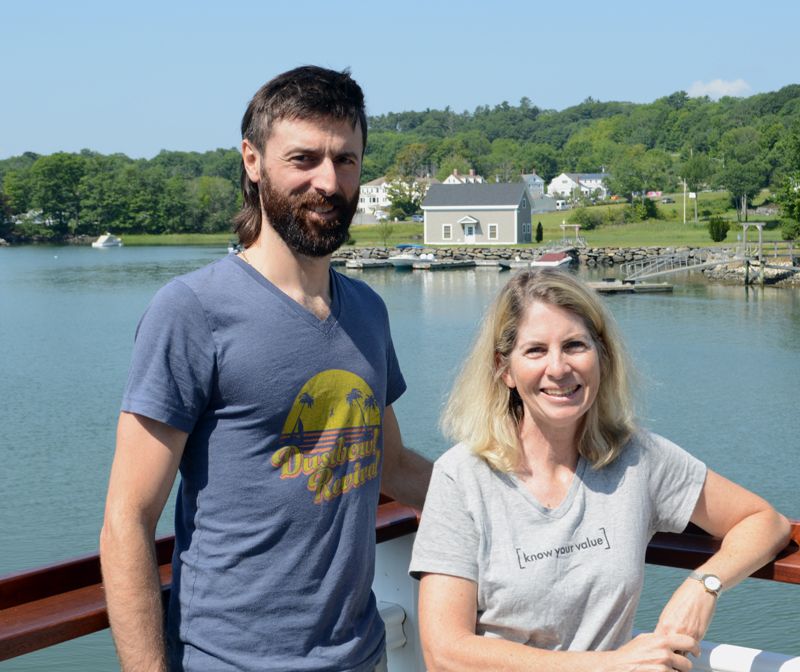 Chef Jon Merry and owner Eleanor Kinney stand on the deck of their new restaurant, River House, on the Damariscotta River next to the Twin Villages bridge in Damariscotta. (Evan Houk photo)

The new River House restaurant next to the bridge in downtown Damariscotta promises a unique farm-to-table experience from start to finish. The place is run by Eleanor Kinney and Jon Merry, farmers and neighbors in Bremen.

At the River House, which opened July 17, Kinney and Merry want the food sources to be the stars of the show. They list all the farms they source from on the menu.

The duo’s philosophy is simple. They want to use the freshest possible ingredients, sourced locally, and cook them well using the unique wood-fired grill in the River House’s compact kitchen.

The ingredients are “the best possible ingredients you can get in the Midcoast,” said Merry, the restaurant’s chef. He said he does not want to “overcomplicate” the food.

“I want to keep it very simple and very primal, but good, well-executed. And the most primal form of cooking is on fire,” Merry said.

Merry enjoys cooking on the wood-fired grill, which he said only a few restaurants in Maine use, as opposed to a wood-fired oven, and he likes the fact that the energy is sustainable.

Kinney said all the wood comes from her own Hart Farm in Bremen.

“Sustainability is an important value for both of us, so we’re paying attention to not just sourcing locally, but thinking about waste, compost,” Kinney said. “We recycle; there’s no food waste going into the trash.” 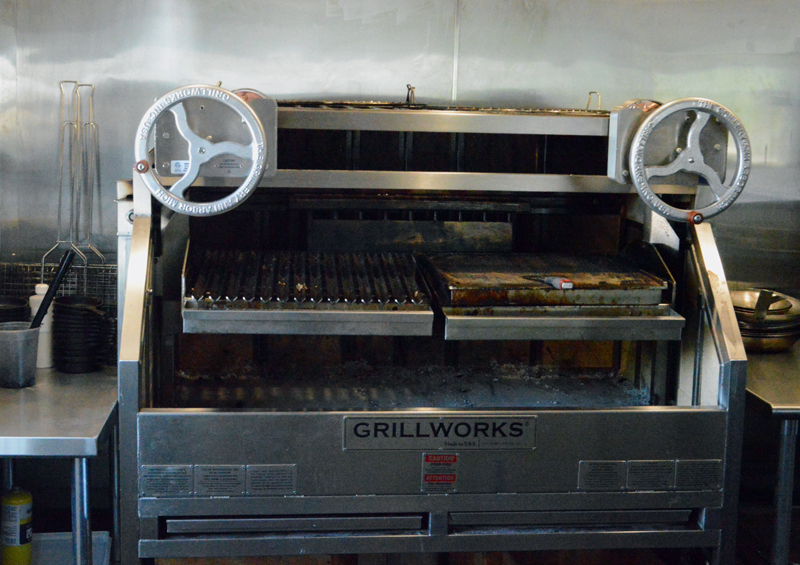 The wood-fired grill in the kitchen of the River House, the new farm-to-table restaurant beside the Twin Villages bridge in Damariscotta. Chef Jon Merry says the grill is a unique instrument for a kitchen to use. (Evan Houk photo)

“We’re really limiting our use of plastic,” said Kinney, a founding member of the local kNOw S.U.P. initiative to eliminate single-use plastics. “We’re thinking a lot about the whole cycle of goods that come through this restaurant and how we can minimize our footprint.”

Kinney is installing two more solar panels on her farm to generate the energy for the River House. She already has panels for the power at her home and farm.

When the River House building was empty, Kinney would drive by multiple times a day. Once she saw the view from the inside, she knew she had to take action. She bought the building in May 2018.

“I walked in here, saw the water rushing under the bridge, and thought that this shouldn’t be an office. This needs to be available to people in the community,” Kinney said.

The building was formerly home to a vacation rental agency.

“It just spoke to me as a restaurant that was going to source from the community and source from local fishermen and local farmers,” Kinney said.

This January, Kinney began the process of gutting the interior and installing new fixtures and furniture, like the handmade cherry wood tables made by local artisan Jeff Kelley.

The River House makes efficient and economical use of the approximately 1,300-square-foot space. A tiny spiral staircase leads to a storage space and office above the bar area.

Merry said the menu has changed three times in the two weeks the restaurant has been open, because he cooks only with ingredients available at the time. 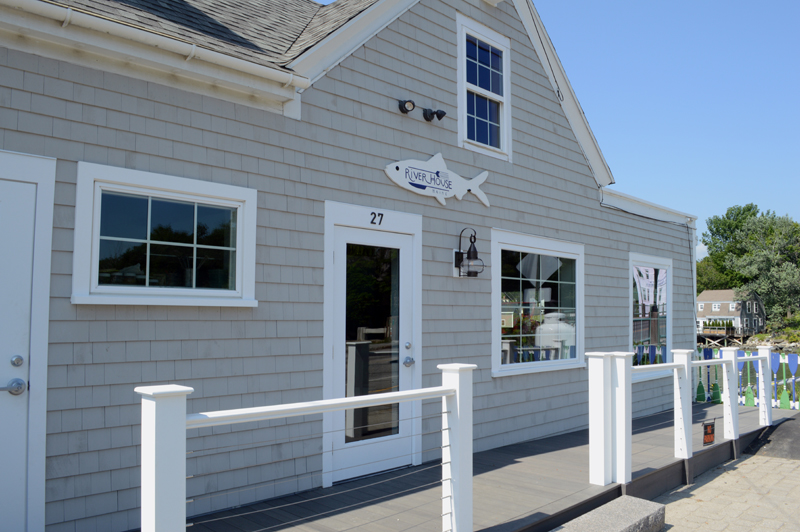 The exterior of the new River House farm-to-table restaurant beside the Twin Villages bridge in Damariscotta. Owner Eleanor Kinney and chef Jon Merry have a goal of sustainability and transparency about where their food comes from. (Evan Houk photo)

He said this is a departure from his experience at the Culinary Institute of America and high-end restaurants where he has worked, where any ingredients in the world are at a chef’s fingertips.

But, he said, it just makes sense to use food that is close, accessible, and available.

There are also sides of vegetables available to add to the entree: potatoes, summer squash, grains, and leafy greens.

The menu also boasts a tempting selection of starters and desserts, including a Moxie float.

Merry even breaks down whole animals in the restaurant, like pasture-raised veal from Springdale Farm in Waldo, in order to utilize every possible part of the animal in his cooking.

The 35-year-old Merry has been working in restaurants since he was 15, including Toro and Craigie on Maine in Boston. He started out at what was Christina’s and is now Mae’s Cafe in his hometown of Bath. He also worked at Solo Bistro, also in Bath, for a time.

But for the past several years, Merry has taken a break from the taxing business to work on his Springtide Farm.

Kinney said she has no restaurant experience, but her extensive work with Slow Money Maine, a funding network for small farms that struggle to obtain loans from banks, informed her conscious decision to place the focus on precisely where the food is coming from. 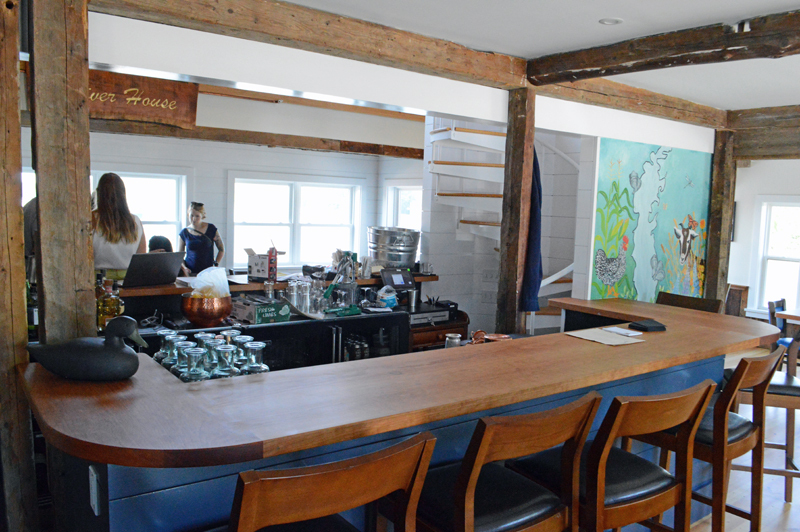 The bar in the new River House farm-to-table restaurant in Damariscotta, next to the Twin Villages bridge. Owner Eleanor Kinney said reservations are encouraged, but the bar is open for walk-ins to eat dinner. (Evan Houk photo)

Through the Slow Money Maine network, she also has many connections with local farmers.

All the produce comes from Morning Dew Farm, of Newcastle; Goranson Farm, of Dresden; Dharma Farm, of Washington; and Kinney’s own Hart Farm.

The restaurant also has an extensive wine collection.

Kinney said the River House, which seats 34 people, has grown increasingly busy over its first two weeks in business, with some customers returning already.

“The word is getting out. We’re encouraging reservations. … We have a full-service bar set up for people to eat, and a small deck where people can wait and have a drink,” Kinney said.

Kinney said she hopes to have the River House open 10 months out of the year.

The River House is open for dinner service from 5-9 p.m. Tuesday-Saturday.