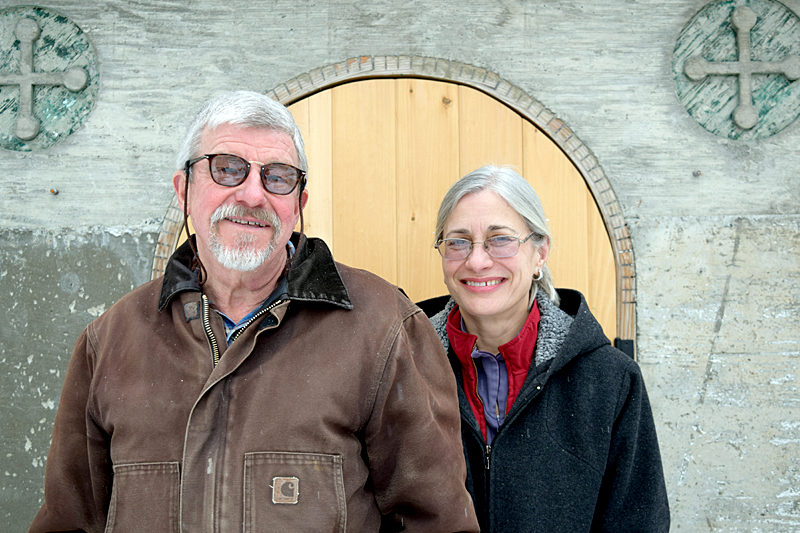 Kurt and Andrea Rauscher in front of the entrance to their new cheese cave. The Rauschers own and operate The Creamery at Bristolhof. (J.W. Oliver photo)

A Bristol creamery will soon begin aging its cheese in a new addition – a cave, only the second of its kind in the state.

Kurt Rauscher is the proprietor of The Creamery at Bristolhof. He buys the milk, makes the cheese, sells the cheese, and operates every other facet of the business – including cave design and construction –  with support from his wife, Andrea Rauscher.

About five years ago, Kurt Rauscher started making cheese. He and his wife liked it, their friends liked it, and they decided to launch a business.

“Our philosophy was that we wanted to do it very old-school, in the old European style,” said Rauscher, 67, who was born in Germany and immigrated to the U.S. in 1957.

After a career in medical electronics, he has owned a boat-building and boat-storage business, Rauscher and Sons Boat Works; founded a nonprofit that worked with juvenile offenders, The Maria Mercedes Foundation; and operated a popular mobile barbecue stand, Sweet Georgia Barbecue.

He likes to do things by hand, the traditional way.

“Throughout our lives, we’ve always tried to figure out how people did things in the old ways, prior to the Industrial Revolution, and it extends through the cheesemaking,” he said.

Back in those old days, “the shepherd or the dairyman would milk his animals, accumulate enough milk to make cheese, and he would have a big pot and make his cheese by hand,” Rauscher said.

By contrast, large-scale modern creameries “might have a 500- or 1,000-gallon vat” with motorized stirring, he said.

Kurt Rauscher picks up 18 gallons of milk at 6:30 a.m., brings it back to the creamery, and heats it in a double boiler. When the cheese reaches the right temperature, he adds cheese cultures to acidify the milk.

“The modern way of doing it is, if you want to make a Gouda, you buy from a laboratory the cultures that give you the Gouda taste,” Rauscher said.

But the Rauschers don’t use commercial cultures. Like the cheesemakers of old, they make their own cultures from the same milk they use to make their cheese.

Another crucial ingredient is rennet, which comes from the fourth stomach of a calf.

A calf turns its mother’s milk into cheese before it digests it. “We’re trying to approximate the same conditions in the double boiler that would be in a calf’s stomach,” Rauscher said.

The enzymes in the rennet “flocculate” the milk – they begin to separate the liquid whey from the solid curds.

Rauscher cooks the curds to a certain temperature, which depends on the type of cheese, then draws off the whey. He scoops the curd into molds and uses weights to press each cheese, which removes more whey.

Next, he salts the cheese with sea salt. The salting process lasts three days. The cheese then dries for about two days.

Finally, “you go into a process of aging – maturing – the cheese,” he said. “The French call it ‘affinage’ – refinement.” The creamery’s two varieties age for three months and six months, respectively.

This is where the cave comes in. 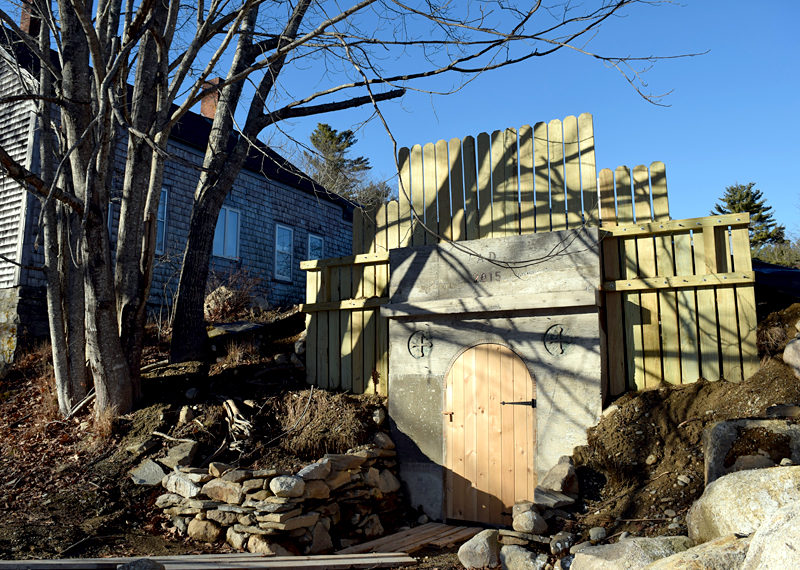 The entrance to the cheese cave at The Creamery at Bristolhof, with the creamery building at left. (J.W. Oliver photo)

To age cheese requires specific conditions – a steady temperature of around 50-55 degrees and 90 percent humidity, according to Rauscher. These conditions are naturally occurring in Maine – about 15 feet underground.

So Rauscher built a cave. He designed the cave with some technical assistance from an architect; borrowed an excavator from Buzz Pinkham, of Damariscotta, to dig the hole; gathered some friends to help him pour the concrete; and hired a local boat company’s crane to lift the pieces of the roof into place.

Each of the 11 steel-reinforced concrete components in the Roman arch-style roof weighs 1,400 pounds, for a total of 15,400 pounds. Add 5 feet of soil on top and “it’s not going anyplace,” Rauscher said. “It’s here for hundreds of years.”

The entire project took about six months. The cost to build the cave was about the same as the cost of a walk-in cooler, which many modern cheesemakers use instead of a cave.

“The difference is, mine is going to last 100, 200 years and there are no electrical costs,” Rauscher said. “It’s very environmentally friendly and totally passive – and old-school.”

The cave also adds style. The entrance, with “A.D. 2015” and the creamery logo, a cross, set into the concrete, gives it the feel of something ancient or medieval.

The cave is only the second of its kind in the state, according to Rauscher. The North Branch Farm, of Monroe, has a cave many times bigger.

The cave might seem exotic in Lincoln County, but similar structures are popular in Europe for the aging and storage of cheese or wine.

When a cheese is ready to age, it will go onto a shelf in the cave. But the work is far from over. “It becomes very intense down here in the management of the cheeses,” Rauscher said.

For example, Rauscher has to flip each cheese twice a day for the first two weeks to ensure the moisture in the cheese doesn’t migrate to one end of the wheel. He also has to wash each cheese with brine two or three days a week.

“People don’t appreciate what goes into cheese in particular and food in general,” he said. “It’s a lot of work.”

But the painstaking process pays off. Rauscher expects the cave to pay for itself in a year. 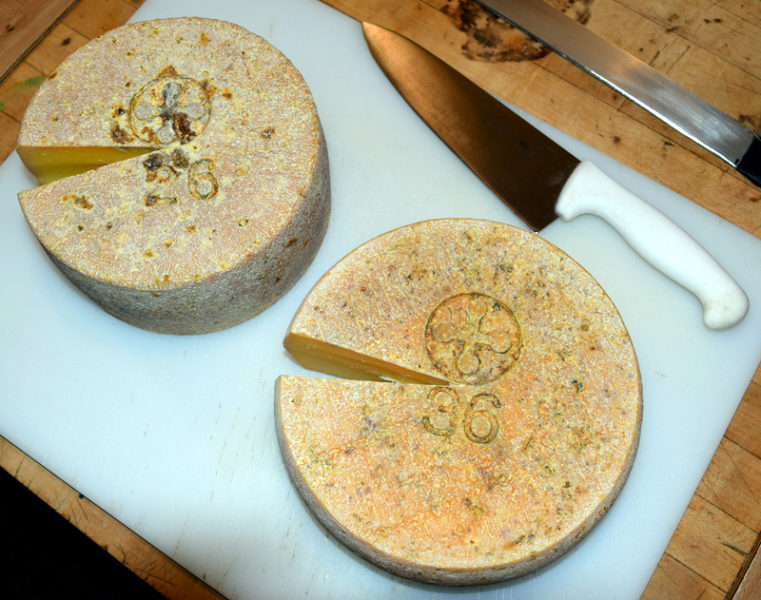 The Creamery at Bristolhof makes two varieties of cheese. Each wheel is numbered and stamped with the creamery’s logo. (J.W. Oliver photo)

“People are crazy about local cheese,” he said. “I have no problem selling it whatsoever, and I’m getting $30 a pound.” Each wheel of cheese weighs 6 pounds. He makes three wheels a day, and the cave can hold up to 720 wheels.

Rauscher calls one of his two varieties Radl, a German word that translates to “small wheel.” The other is Pius, which is Latin for pious. “It’s a humble little cheese,” he said.

Both are Alpine-style cheeses, but each has characteristics unique to the ingredients and the place.

“It has a lot of what the French call ‘terroir,’” Rauscher said. “It’s from this land.” Even the cows at Straw’s Farm and the local feed they eat contribute to the character of the cheese.

Rauscher recommends eating the cheese with beer or wine. “If you take a good piece of food, you should stop and enjoy it,” he said.

“I think, in this country, we’re so used to having so much of everything that we take it for granted,” he said. “We need to slow down, I think, and take our time to enjoy things a little bit more.”

The Creamery at Bristolhof’s cheese is available at the creamery and at Morse’s Sauerkraut in Waldoboro, Treats in Wiscasset, and Weatherbird in Damariscotta.

The Rauschers plan to visit area farmers’ markets this year, and as soon as more inventory is available, to offer their cheese at locations in Bath, Brunswick, Freeport, and Portland.

To buy direct from the creamery, call Rauscher at 380-1836. The creamery is at the end of Hanley Farm Road, off Lower Round Pond Road.