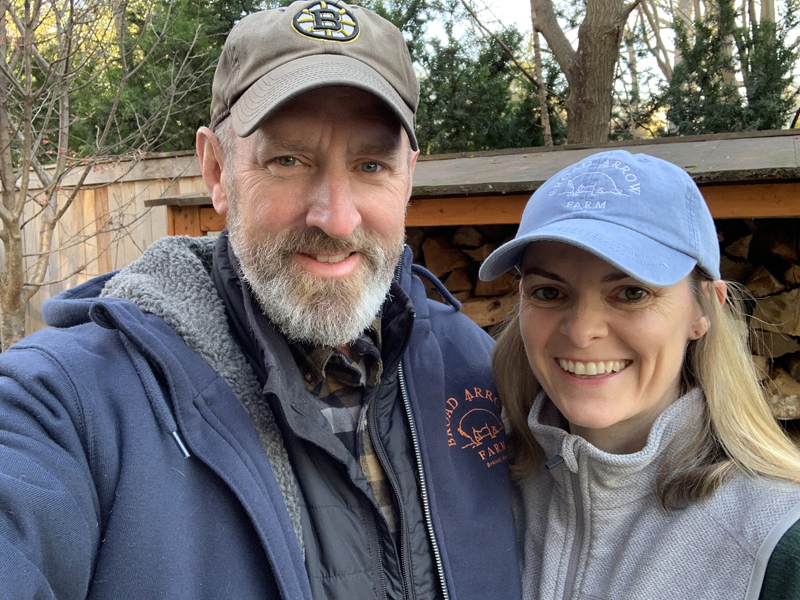 Dan and Maggy Sullivan own Broad Arrow Farm in Bristol. The farm has a new meal membership program, Suppah Club. Members can buy and pick up restaurant-quality food weekly to heat up at home. (Photo courtesy Dan Sullivan)

As restaurant-quality meal options dwindle during Midcoast winters, Broad Arrow Farm in Bristol is filling the void with a new meal club.

The Suppah Club, a membership-based meal program that uses local ingredients, started in January as a way to offer healthy alternatives to locals’ weekly dinner menus.

Dan and Maggy Sullivan, farmers and owners at Broad Arrow Farm, do not come from a farming background. In 2014, they started farming because they wanted to raise their own food.

“We had a big garden and we raised five pigs, some broiler chickens, and we bought 15 laying hens, and it was a real revelation because the food tasted so different. We were stunned by how different it tasted,” Dan Sullivan said.

They loved the food they prepared from the animals they raised and couldn’t go back to eating what they thought was healthy, organic food, but was produced on factory farms. Dan Sullivan refers to the food they produce, an alternative to the industrial food model, as “real food.”

The Sullivan family invested in expanding the size of their livestock farm to share their food with the broader community. Today, Broad Arrow Farm has six full-time employees. 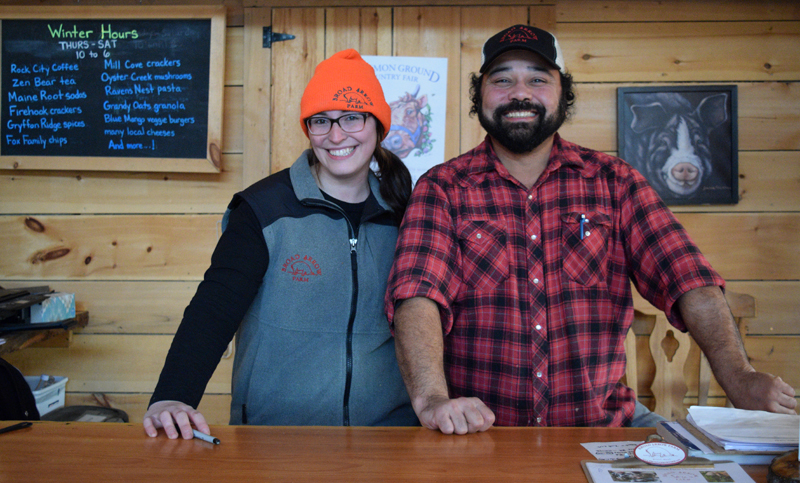 Kelly Dunbar, a Broad Arrow Farm employee who manages the Suppah Club, stands next to Omen Viele, the chef who prepares the food for the program. (Jessica Clifford photo)

The farm currently sells its products at an on-site market as well as through its website, by making cold-packed shipments. In addition, Broad Arrow Farm wholesales its products to restaurants, butcher shops, and specialty grocers in Maine.

Dan Sullivan, works on production, marketing, and sales for the farm, while Maggy Sullivan, an attorney by trade, manages the farm.

According to Dan Sullivan, many of his family’s favorite restaurants close around the fall and reopen in the spring. This leaves few options  during the winter, especially for those who live on the Pemaquid peninsula.

Broad Arrow Farm has a chef on staff and starting a meal club was “a way for us to get our food into people’s mouths,” Dan Sullivan said.

“It’s a great way to create some activity in our farm market and to let people know we’re still operating and we’re not asleep for the winter, like many places are on the peninsula,” he said.

The club is supposed to run through the end of May; the Sullivans have not decided whether to offer it during the summer months. Dan Sullivan expects to survey club members and see what they would like the farm to do. 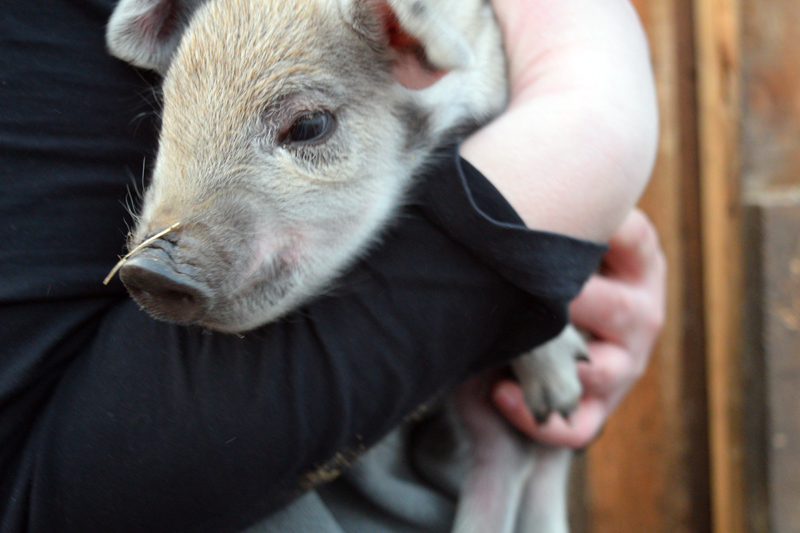 “I think this is going to be a regular feature,” he said of the Suppah Club. “It’s been really popular.” The club might start earlier in the winter than it did this first season, but nothing has been decided.

The Suppah Club offers a small weekly menu to choose from, with two entree options and three sides. Each member can pick up one entree and two sides per week, sized for two people, Dan Sullivan said.

Each new member pays a $10 upfront fee. There are 10% discounts on every Suppah Club meal purchased through the end of May. Members do not have to order every week.

“We want to deliver the whole cycle of eating,” he said.

Omen Viele, the chef at Broad Arrow Farm, prepares the food in the farm’s commercial kitchen. Viele has more than 20 years of experience as a butcher and chef, working in various Portland restaurants. 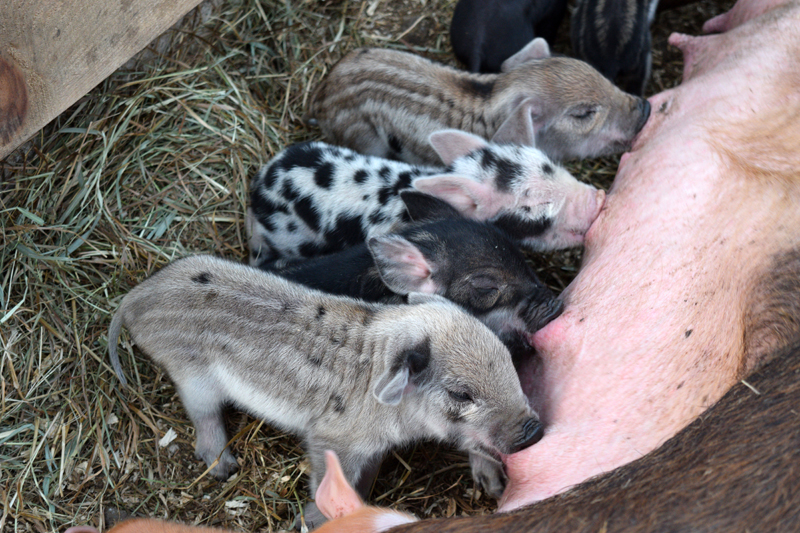 She communicates with the chef about menu plans, sends weekly emails to members, assists in packing and labeling meals, and is the friendly face when members pick up their food.

“We have many members from Bristol who are excited to have this option close by, but it has been great to see that our members are coming from all over the area,” Dunbar said. The farm has members who live in Damariscotta, Newcastle, Nobleboro, and South Bristol.

Members can pick up their meal for the week on Thursday, Friday, or Saturday and reheat it in their oven at home for around 15-30 minutes, depending on the meal.

Every week, leftover meals are frozen. If a member doesn’t want either entree option during a given week, they can choose from a frozen meal available at the Broad Arrow Farm Market.

According to Dan Sullivan, nonmembers may buy meals too, but they pay full price and meals are only available to nonmembers on a first-come, first-served basis.

“We wanted to offer dinner options that you would not normally make at home yourself. It is something you would order at a restaurant,” Dan Sullivan said.

Viele said all the meals on the changing menus are his creations. 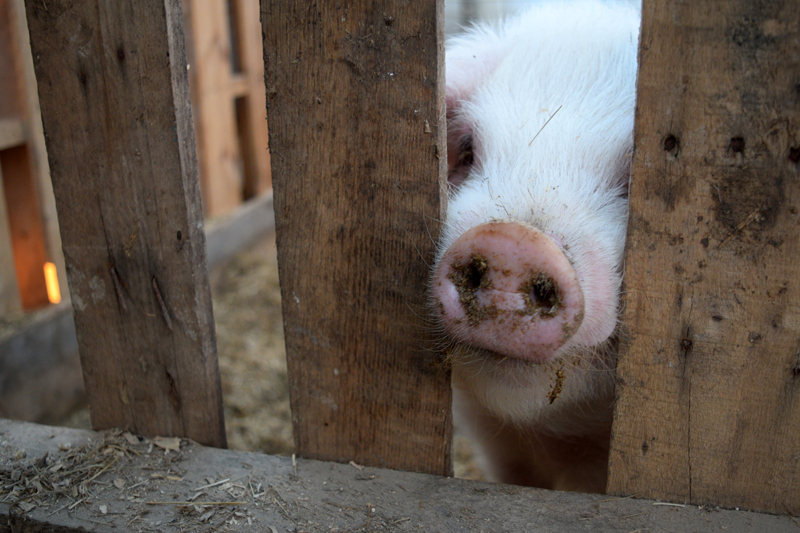 A pig sticks a muddy snout through an opening in a fence at Broad Arrow Farm in Bristol. (Jessica Clifford photo)

He said he is inspired by the animals on the farm and wants to produce meals that are “satisfying and hearty for these winter months.”

Some of the entrees include lasagna Bolognese; chicken ballotine, which is boneless chicken stuffed with sage and prosciutto; Mediterranean spiced lamb meatballs; and pork-and-lamb meatloaf.

Some of the sides include roasted squash, braised red cabbage, potato dumplings, and glazed carrots.

Nearly all the ingredients are produced in Maine, and the meat is from Broad Arrow Farm itself.

According to Dunbar, many entrees have stood out, but the most popular thus far has been the lasagna Bolognese.

The farm has received great feedback on the club, Dan Sullivan said.

“Something I have been hearing from a lot of our Suppah Club members is that they love having another option and not having to cook one night a week,” Dunbar said.

To enroll in Suppah Club, go to broadarrowfarm.com, click on farm news, and scroll for the sign-up sheet. Weekly menus will be sent by email.