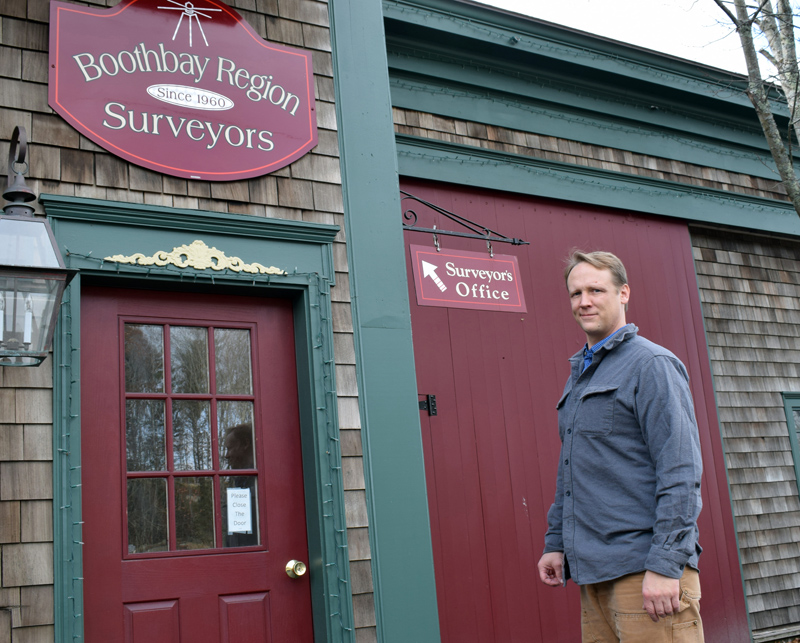 Nicholas Plumer outside the office of Boothbay Region Surveyors at the old town garage in Boothbay. Plumer, of Bristol, bought the long-standing business in 2017 and recently changed the name. (Evan Houk photo)

The Bristol surveyor at the helm of the former Leighton & Associates Inc., of Boothbay, has given the 59-year-old firm a new name – Boothbay Region Surveyors – and is introducing new technology to serve its clients.

Boothbay Region Surveyors owner Nicholas Plumer, a certified land surveyor, announced the name change in a letter to clients and others last month.

“We feel a strong sense of pride, history and community to this region and felt changing our name to Boothbay Region Surveyors, or BRS for short, made sense,” Plumer said in the letter. “We at BRS hope to continue to support and provide you with state-of-the-art land surveying services for land title conveyance and site development for the next 60 years.”

“Going forward – you will see a new look – but our commitment to the community hasn’t changed,” he said.

The company’s brochure explains boundary surveys, which determine the property lines of a parcel of land as described in the deed. A boundary survey also can identify any easements, rights of others to use land, or encroachments – unjustified use of the property by others.

The brochure explains that a survey is strongly recommended before “buying, subdividing, improving, or building on your land.” A survey can help avoid the expense and frustration of a lawsuit, the relocation of a building, or other hassles.

Plumer, in an interview Nov. 8, talked about his plan to integrate new technology into his business in order to streamline the surveying process.

One such change involves the digitization of the company’s paper files. Plumer showed a screen on his computer that has all the firm’s newer surveying jobs color-coded on a map of the county.

For older jobs not yet in the system, Plumer said, there is a multiple-step process to look up a relevant file for a client, cross-referencing between documents and filing cabinets. The digitization of these records will provide ease of access.

Plumer is using “geo-referencing” technology involving a drone that takes aerial photographs of square plywood targets set up on a property to produce a three-dimensional image with computer software.

He also recently purchased a laser scanner from a former employer in South Carolina to scan land areas.

“I’m glad that I grew up in South Carolina and found that technology and could bring it back to the state that I love,” Plumer said.

Plumer is originally from Readfield, in Kennebec County, but moved to South Carolina to live with his mother when he was young.

His mother, Judith Dianne Powell, was an architect. His father is an artist who paints and sketches and lives in Hallowell. Plumer pointed out a few of his paintings hanging in his office.

As a boy, Plumer returned to Maine every summer to visit his grandparents and his father. His grandfather, Paul Plumer, was vice president and editor of the Kennebec Journal until his retirement in 1975.

His grandparents retired to Walpole, giving Plumer his first familiarity with the Lincoln County area. He represents the sixth generation of his family to live in Maine.

Plumer originally enrolled at Appalachian State University in North Carolina as a physics major, but dropped out when he realized the calculus portion was not his cup of tea.

He started working for a civil engineer in Greenville, S.C. in 2002.

“In 2004, the engineer traded me off to the land surveyor, who was in his basement, so I started land surveying,” he said.

Plumer had learned computer-aided design and drafting when he was 15 and was familiar with a drafting table because of his mother’s profession as an architect, so the surveying job was a natural fit.

He still likes to invent things in the spirit of his physics background, saying he has a patent pending for a “contactless snowplow.”

After the 2008 Great Recession, Plumer listed his resume on the Maine Society of Land Surveyors website, hoping to move back to Maine.

Plumer soon forgot about the listing, but in May 2013, he heard from Terry Leighton, owner of Leighton & Associates Inc., who was looking for someone to take over his business.

The firm had started as Boothbay Engineering Services in 1960 before becoming Leighton & Associates. Plumer bought it in 2017.

He acquired his professional land surveyor’s license and began to upgrade the technology in the office, starting with the purchase of flat-panel computer monitors.

He was recently elected president of the Midcoast chapter of the Maine Society of Land Surveyors.

Plumer now lives in Bristol with his other half, Faustine Reny, and their two young children, Cordelia and Wesley Reny.

Boothbay Region Surveyors is located at 1037 Wiscasset Road in Boothbay, on the second floor of the old town garage. For more information, call 633-4445.