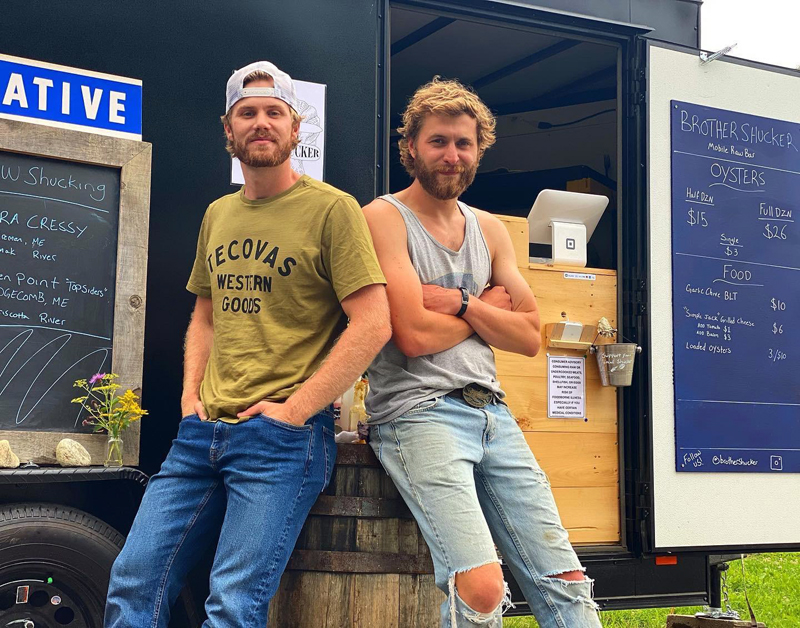 Hudson (left) and Zak Kuras (right) officially opened their new oyster bar, Brother Shucker, in Wiscasset in July. While the brothers currently operate the business out of a retrofitted trailer, they are in the process of renovating a storefront at 4 Railroad Avenue. (Photo courtesy Hudson Kuras)

Anyone that has strolled around Wiscasset in the past two months has likely spotted a conspicuous black trailer with a sign boasting “FRESH MAINE OYSTERS” in large blue letters on Railroad Avenue. Despite the wheels, this raw bar is in it for the long haul.

Officially opened in early July, Brother Shucker is a family business led by two brothers, Hudson and Zak Kuras. Raised in upstate New York, they spent vacations in the Damariscotta area with their family their entire lives.

Oysters have always been a key part of that experience.

Zak Kuras remembers frequenting Glidden Point Oyster Farm in Edgecomb with his family, picking up about a dozen oysters, and wrestling their way through them at home.

Neither of the two brothers, Zak at 30 years old and Hudson at 27, anticipated the trajectory of their careers leading them to starting their own oyster business together.

Zak studied political science in college, but it ultimately left him uninspired. After a five-month road trip, he decided to move to Maine in 2016 and began farming oysters at Glidden Point, where his passion for the tasty bivalves first sparked.

Zak eventually got the opportunity to work as the aquaculture manager for Bremen’s Community Shellfish. He was successful there, growing the farm from a 100,000-oyster operation to 1.3 million. That’s when he began to consider how to craft his own place in the rich Downeast oyster industry.

He reached out to his brother to see if he would help get things off the ground. Before Brother Shucker, Hudson worked in New York City’s corporate finance industry.

In a phone interview on Thursday, Aug. 26, he said that when the pandemic hit, he found himself confined and working long, unfulfilling hours from home. He was burned out, and decided that he needed a change.

The brothers made an attempt at opening a space in Rockport, but it didn’t pan out. Just as Zak was losing hope in the raw bar’s chances, he noticed the sign at 4 Railroad Ave. advertising a space specifically for a beer and oyster bar last spring.

Craig Winslow, who owns the building, said he was looking for inquiries from potential restaurant owners for the space because he believes that is what the town needs to draw in more business. 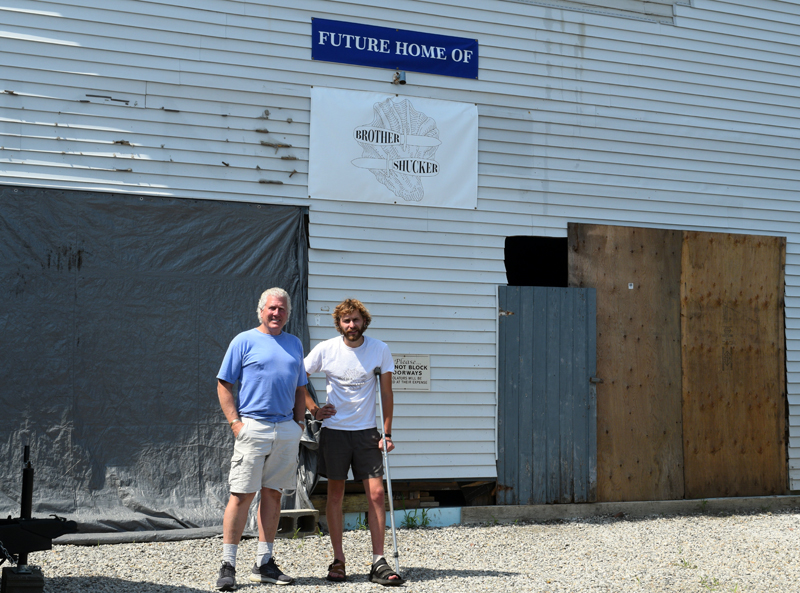 Zak Kuras and Craig Winslow in front of the raw bar’s eventual homebase at 4 Railroad Avenue. Winslow and the Kuras brothers are hoping the have the restaurant up and running by early 2022. (Nate Poole photo)

Already, Winslow has leased the space upstairs at 51 Water St. to In a Silent Way Wine Bar, once located at 65 Main St. before the building’s facade crumbled.

Facing the Sheepscot River and just two buildings down from Red’s Eats, Brother Shucker’s future storefront is ideal for drawing in hungry visitors. However, it needs lots of renovations before it will be ready for use, as Winslow and the brothers plan to install large glass doors and a patio out front.

Not wanting to waste a summer, Zak and Hudson started their business from a trailer in front of the building.

The brothers didn’t plan on a mobile unit, but since they started using the trailer, businesses and organizations like Cushnoc Brewing in Augusta, Boothbay Craft Brewery, Odd Alewives, the Wiscasset Art Walk and Schoonerfest all asked for their attendance.

The trailer’s current menu is limited by the size of the trailer, but they hope to eventually offer signature sandwiches, “sea-cuterie” and charcuterie boards, and a greater variety of clams and oysters that may rotate and change on a weekly basis.

In the summer, Zak also hopes to offer an outdoor grill menu. Always building connections with local businesses and vendors, Zak’s goal is to source as many of their offerings as they can from Maine.

Half of Brother Shucker’s current stock consists of Cora Cressy oysters, the kind that Zak cultivates on the Medomak River with Community Shellfish. The other half comes from a variety of Maine outlets that he got know during his tenure in the industry, like Johns River and Glidden Point.

For those that have not tried raw oysters before or might be wary of them, the business offers a variety of “Loaded Oysters” topped with ingredients, like dill pickle sauerkraut or curried cauliflower and hot sauce from Bremen’s 30 Acre Farm.

Zak envisions the restaurant as something different from other oyster bars, a semi-casual one that can attract locals in the winter and seasonal travelers in the summer.

Hudson described his goal as bringing a “younger, fun vibe” to the area. There’s a lot left for the brothers and Winslow to work on, but all of them hope to open the restaurant by early 2022.

“In the summer, (we can) give people a respite from the heat and have a beer, and in the winter a cool gathering area for local people, especially younger people, to be able to have somewhere to go that’s open past 7,” Hudson said.

Both brothers said the response from local businesses and municipal officials was a pleasant surprise. They said that Deborah Gagnon, a co-owner of Red’s Eats, even encouraged people in line for Red’s to pay a visit to Brother Shucker.

“The excitement from the locals and the support from the business owners in the community has … definitely just blown me and Zak away,” Hudson said.

For more information on hours and locations, find Brother Shucker on Facebook and Instagram. Those seeking catering services from Brother Shucker can send the business a direct message on Instagram or email them at brothershucker@gmail.com.