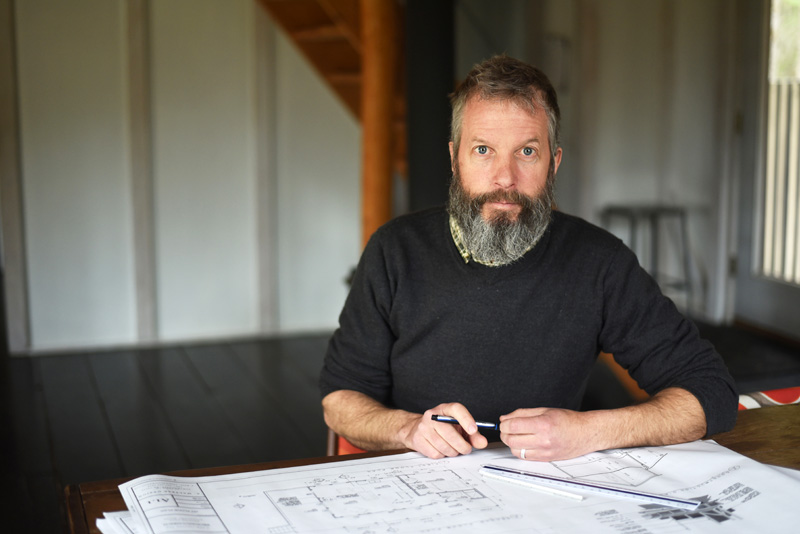 Adam Maltese sits in his Damariscotta home, where he works as an architectural designer, Thursday, April 19. (Jessica Picard photo)

Since his father was a general contractor, Maltese was always around construction.

“There’s always been some project underway in every house I’ve ever lived in,” Maltese said.

Maltese said that while he loves construction, he also really enjoys the artistic aspect of designing a project.

Maltese has a degree in sculpture from Johnson State College in his home state of Vermont. He moved to Maine about 20 years ago and to Damariscotta in 2011.

Through his previous work at larger design firms, Maltese created a niche for himself of doing smaller projects.

“Big firms have the potential of handling really large projects, because they have big teams. You have this massive team that constantly needs to be brought up to speed on the project … For small projects, the cost associated with that can start to drag that project down,” Maltese said.

“It is easier if one person sort of handles that little project, from meeting a client for the first time to producing the finished drawings,” Maltese said.

“My focus is really going to be on those smaller jobs,” Maltese said.

Maltese’s job is to take a client’s idea, make suggestions, and put the design on paper for the builders.

“You know what that vision is at the end, but it’s hard to get that on paper,” Maltese said.

“That’s really my role, to try to take what the client wants, put it on paper, and then sort of work it backward so that that’s all heading in the right direction and heading toward that finished goal … It becomes this collaborative project,” Maltese said.

Maltese mostly works on residential projects. When he worked for firms, he was often designing large second homes or “projects that are dollar-driven,” he said.

Now that he is stepping out on his own, he is putting his focus elsewhere.

He wants to work more with “the average family,” he said.

“There is a definite benefit to having someone come in to kind of look over your shoulder and give you some advice and kind of walk you through the process … Unfortunately, that hasn’t been readily available just because of expense,” Maltese said.