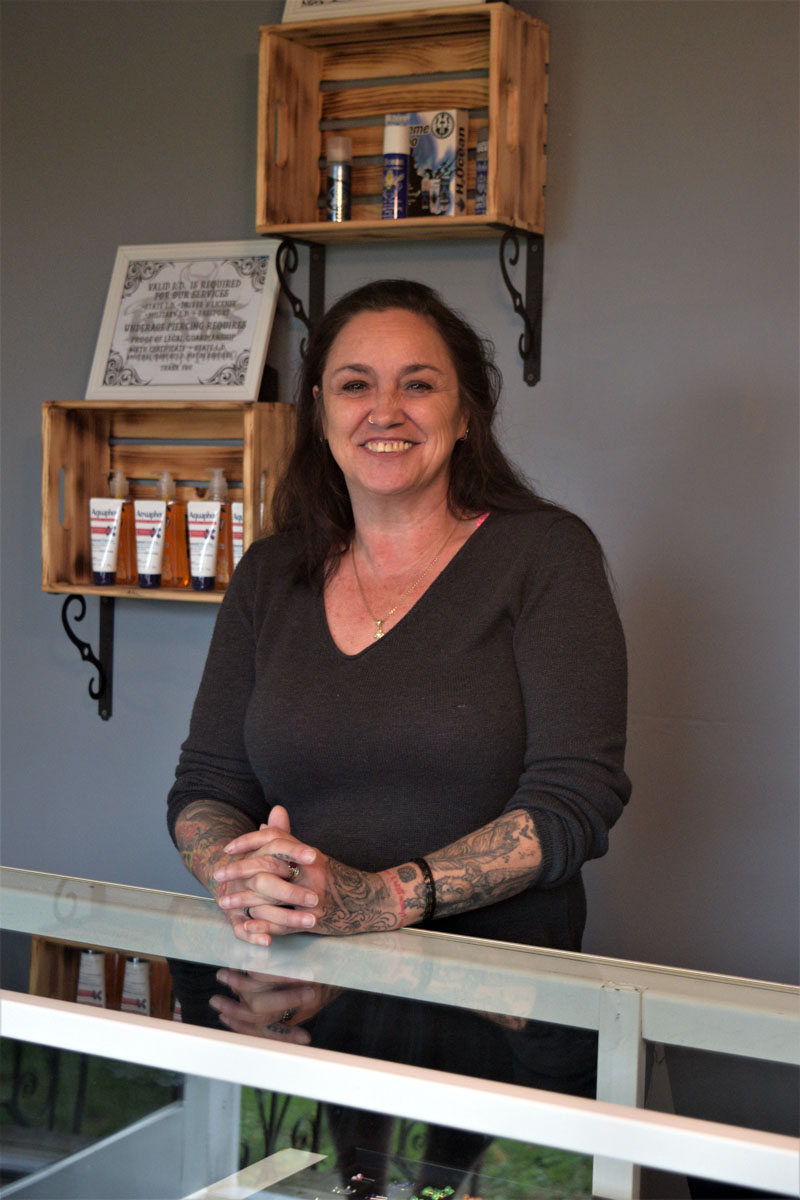 Kat Stewart officially opened Kat’s Piercings and Tattoos on Aug. 25 after a summer of substantial renovations to her shop’s location at Twisted Iron Customs on Route 1 in Edgecomb. (Nate Poole photo)

Lincoln County’s only piercing and tattoo studio has officially hit the scene in Edgecomb.

Located at Twisted Iron Customs on Route 1, Kat’s Piercings and Tattoos opened on Aug. 25 after a long summer of renovations.

Kat Stewart, a body piercing practitioner since 2013, spent a year considering and preparing for the business with her long-time friend and Twisted Iron Customs owner Michael Benner.

“There’s nothing in the whole Midcoast for piercing, at all,” she said at her shop on Sept. 28.

Stewart currently has three full-time tattoo artists, Floyd Harper, Shane MacDougall, and Brian Frampton. While the three artists can do a wide variety of tattoos, each of them specializes in a particular style.

Harper is from New Hampshire and has 25 years of experience as a tattoo artist and particularly enjoys realistic tattoos and fine lines. Frampton has been tattooing for 24 years and specializes in New School-style tattoos, which feature bright colors and a graffiti-like quality. MacDougall has been tattooing for nearly six years and specializes in lettering and American traditional-style tattoos, which feature clean, dark lines and vivid colors with minimal shading.

“They’re all versatile; they can all do everything,” Stewart said.

An accomplished and well-regarded body piercing practitioner across central and Midcoast Maine in her own right, Stewart said she can do any piercings and has performed as many as 25 to 40 piercings a day in the past.

Stewart began her career teaching cosmetology, with a focus on anatomy and physiology, at a school in Portland, and when there was demand for a female piercer at the tattoo shop where her ex-husband worked, she took up an apprenticeship as a piercing practitioner. She fell in love with the occupation, and it wasn’t long before she was piercing full time.

Although her shop only hit the scene a month ago, Stewart said she is already booking appointments out to November. 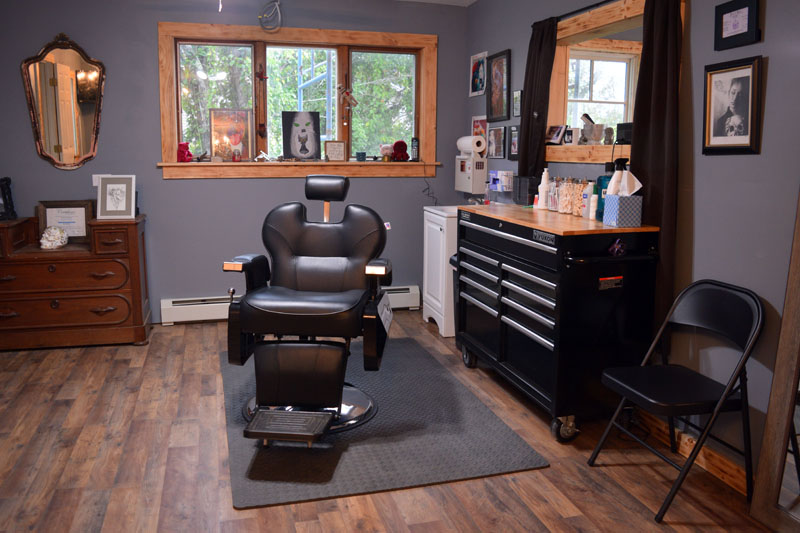 Kat Stewart has been a professional body piercing practitioner since 2013. She is capable of any kind of piercing and can perform anywhere from 25 to 40 a day. (Nate Poole photo)

However, the road to opening the shop was not an easy one. The building her shop resides in on the Twisted Iron complex was left dormant and in a state of disrepair. The entire interior had to be gutted down to the studs.

Stewart’s partner, Anthony Luce, took care of most of the renovations with her and Benner, and he serves as the shop’s manager.

As a result of their efforts, the new interior is unrecognizable from its past life. The shop’s gray walls and burnt wood trim complement the black leather tattoo and piercing chairs, speaking to Stewart’s effort to create a calm, welcoming atmosphere.

“I just want people to feel comfortable when they come in. I know there are some shops that are really loud and play a little more aggressive music,” Stewart said.

Stewart said her working relationship with Benner, whose shop sits less than 20 feet away, has been immensely positive and symbiotic.

“He’ll send people over this way and I’ve had people come here asking for Mike,” she said.

Stewart’s shop is the latest addition to the Twisted Iron family after bringing in Atomic Shakes, a seasonal milkshake business, in July. At the shop on Sept. 28, Benner said the studio has already been a huge draw for new patrons. 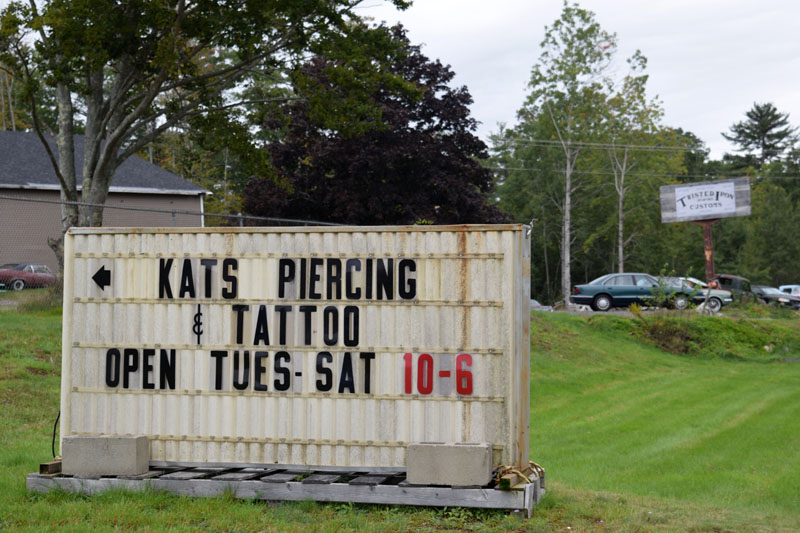 Kat’s Piercings and Tattoos offers tattoos from three full-time artists and piercing’s courtesy of Kat Stewart, and is open Tuesday through Saturday, from 10 a.m. to 6 p.m. (Nate Poole photo)

“So far I’ve heard nothing but real good things about their artwork and their piercings. There’s always someone looking for her, everybody’s chasing her down,” he said.

Benner said that his goal for Twisted Iron Customs is to turn it into a destination along Route 1 where visitors can stop for a bite to eat, get their cars worked on, or get a piercing or a tattoo.

Stewart has big plans for the shop’s future as she continues to invest in their shop, its services, and her inventory of jewelry.

She and Benner said that they will continue to work on the exterior of the shop, as they plan to add a deck on the outside for additional waiting space. She is also planning to hold an official grand opening event in October.

Kat’s Piercings and Tattoos is open from 10 a.m. to 6 p.m. Tuesday through Saturday and offers both walk-in services and appointments.

For more information about the shop and the artists’ portfolios, visit Kat’s Piercings & Tattoos on Facebook.