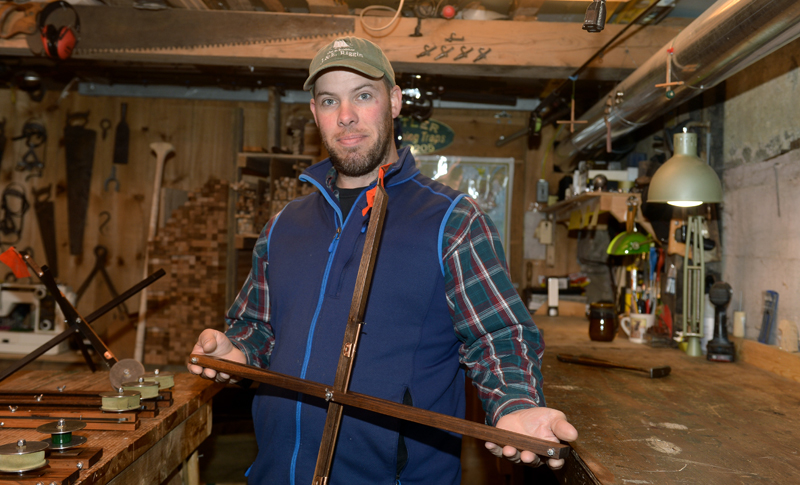 Oliver Butler builds his ice fishing traps to last a lifetime, but his exceptional craftsmanship has led to many of them being displayed as works of art on fireplace mantles in many a Maine cottage and beyond.

Each trap is painstakingly handcrafted with an eye for detail at his Butler Traps workshop in Damariscotta Mills in Nobleboro.

A carpenter by trade, Butler started making traps in 2008 as a seasonal job when he found himself temporarily out of work one winter. His uncle, Trey Walker, had given him a set of his great-grandfather Edward Butler’s traps. Edward Butler used to ice fish with them at his camp on Great Bay on Damariscotta Lake in Jefferson.

Butler said the instant he saw the traps, he said, “I would like to make a set. A buddy of mine said, ‘If you make a set, I’ll buy them.’”

Butler made a second set of custom traps and a storage box and sold them, too — and Butler Traps was born.

He makes the traditional cross trap and several varieties of a center-fold trap (tip-up), including one with an extra-long center post that puts the flag higher in the air for better visibility. 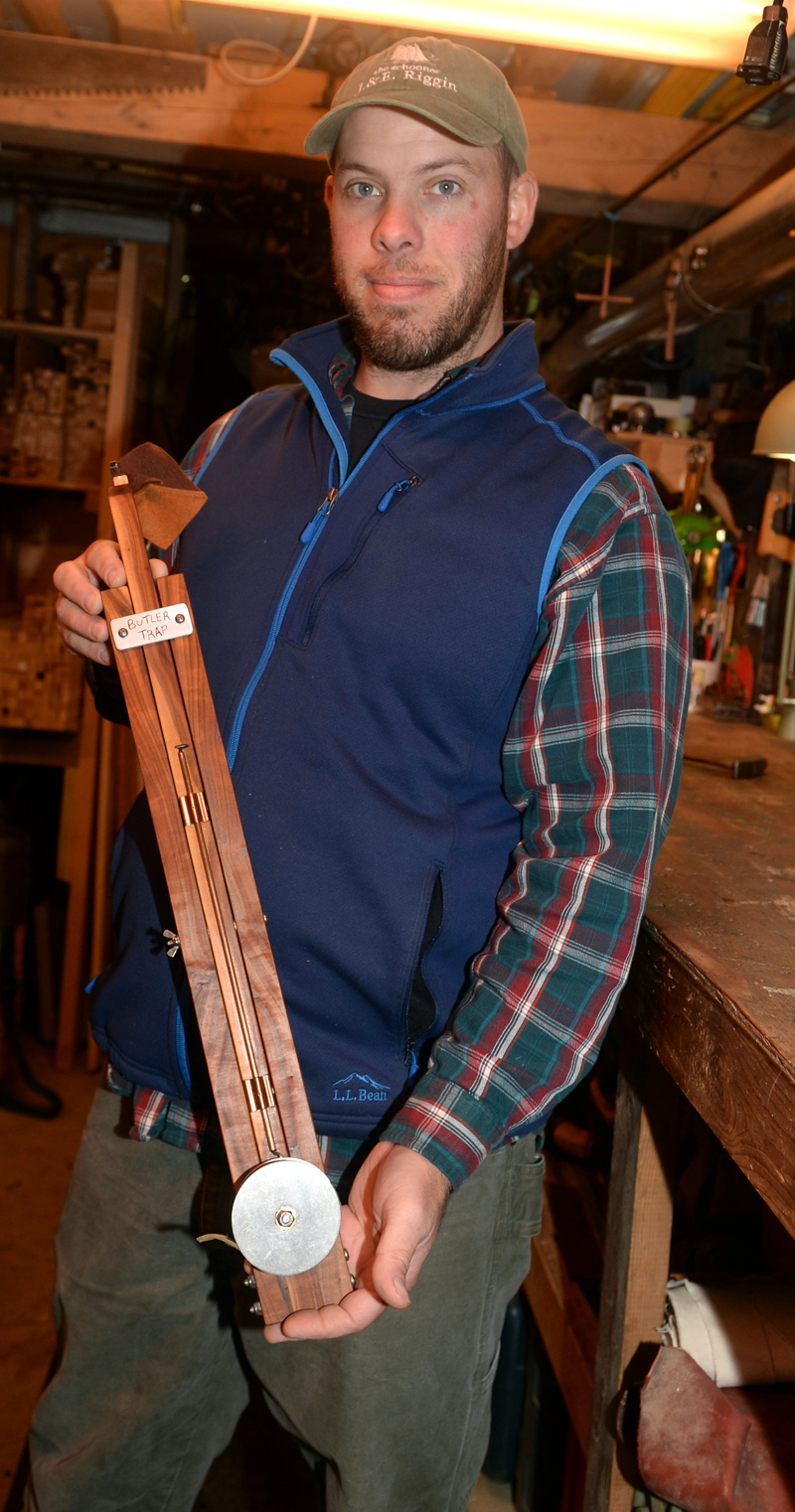 Butler makes his traps out of a large variety of hardwoods, including locally obtained red oak, white oak, cherry, apple, walnut, maple, birdseye maple, and ash, and exotic woods like mahogany, ebony, purpleheart, and  lacewood (snakewood) from Japan. He sources all his wood and materials locally whenever possible. When Stonewall Stables in Nobleboro cut down its cherry trees, Butler acquired the trees.

Butler repurposed a wood plank he found on the shores at Spruce Head. He thought the plank was oak, because it was heavy and colored gray with age. He was pleasantly surprised when he planed it down and discovered it was ebony.

He loves the different grains of wood, with apple being one of his favorites. Butler also likes the visual effect of small knots in the wood he uses. The cherry he got from Stonewall Stables “has wonderful little knots,” he said.

Butler uses a minimal amount of tools in his small workshop. He cuts logs down to size using a chainsaw. He then works them into shape using a 10-inch planer he bought at a yard sale, a table saw, and occasionally a circular saw.

“I like to explore different types of wood. Every time I cut into a piece of wood it is a surprise to me,” Butler said of the knots and grain of the wood he works with.

Butler loves to ice fish and personally tries out every design he makes. His pack basket is filled with traps he made out of different kinds of wood.

He likes hardwood for its strength. “When you tighten the wing nuts, you suck in the heads of the bolt,” Butler said of mass-manufactured traps made with softwood.

Butler custom-makes traps by request, including one custom-ordered trap with ebony on the sides and the red-colored lacewood in the middle. After polyurethaning them, “the color pops,” Butler said.

Butler’s traps are perfect for “people who abuse their ice fishing traps, let them get iced up, and throw them in the back of a truck,” he said. “You’re not going to hurt these traps. Everything about them is really, really rugged. I put (on) a protective urethane-linseed oil mix that lets the water bead up. The wood will not soak up any water.

“I market them as a rugged lifetime trap that will perform just like they should,” Butler said.

The traps are glued and clamped and also held together by bolts. He uses copper tip-ups and stainless steel reels. “They are the most rugged reels on the market,” Butler said of the stainless steel reels he uses. “These are super-smooth operating reels. The fish don’t even know the line is connected to the bait. Most commercial reels are made from plastic or aluminum. Aluminum is not even half as strong.”

Butler’s other side business is repairing sewing machines, so he is adept at running a sewing machine. He hand-sews all his flags for his ice fishing trap using organic felt. Butler makes the standard red, as well as pink, purple, green, and multicolored flags. He has even made custom flags with unique designs on them.

He has even made custom traps using black walnut wood that came off a customer’s property. “It takes a while because the tree is green and I have to wait a year for it to dry,” said Butler. 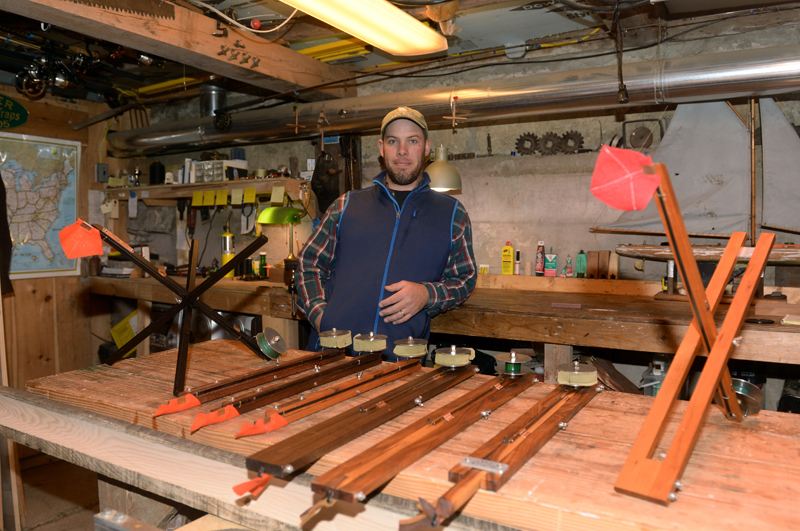 Oliver Butler in his Damariscotta Mills workshop with a variety of his ice fishing traps, including a cross trap made with ebony (left). (Paula Roberts photo)

Another custom job he built was black-and-gold-painted traps with a fleur-de-lis emblem on the flags. Custom work like painted traps and extra flair are an addition to the base price.

Butler Traps are sold locally at Ames True Value Hardware Supply in Wiscasset, and at Johnson’s Sporting Goods in Rockland and Portland. They are also available online at etsy.com/butlertraps. The cost is $50 a trap.

“You are paying for something handmade, not mass-produced in a machine. I hand-tune every trap so it’s perfect. Each trap gets my full attention, from milling the wood until it is ready to be sold,” Butler said.

Look for Butler on Damariscotta Lake this winter driving a 1971 yellow Olympic snowmobile, as he likes to stop and talk to fishermen and show them the traps he has made. “Just wave me down if you need anything. I always carry a box full of traps,” he said.