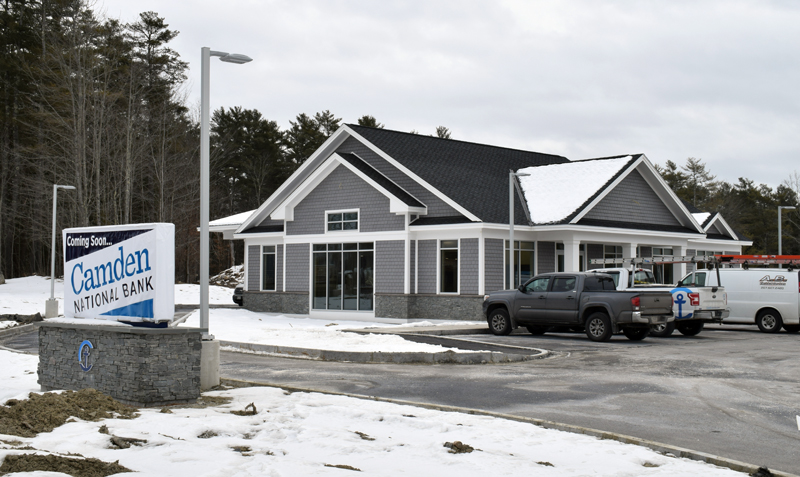 Camden National Bank is the first and, for now, only tenant ready to open in the development near the Lincoln County Rifle Club. The branch will occupy a 3,400-square-foot building with a drive-thru.

Dan Catlin, CEO of Commercial Properties Inc., said no leases have been signed for the other potential spaces.

“We’re prepared to subdivide if needed,” Catlin said in a Monday, Feb. 17 phone interview, noting that the buildings can be split into more spaces if necessary.

Camden National Bank, in a September 2019 press release, described the future home of its Damariscotta branch as a “high-tech, high-touch banking center” that will include a drive-up window and ATM, as well as convenient customer parking.

Mark Graham, vice president of corporate real estate and facilities for the bank, said “high-touch” refers to the use of iPads and other technology. He said tellers will teach customers how to use desktop banking and mobile apps to make their experience easier.

“It’s all about leveraging the technology to make banking simpler,” Graham said in a September 2019 interview.

Graham said the branch will have the ability to issue new debit cards in about five minutes.

The bank will hold a grand opening for the new location from March 9-13. The celebration will include refreshments, raffles, special offers for certificates of deposit, and more, according to the letter to customers.

The town of Damariscotta, meanwhile, plans to create a tax increment financing district encompassing the Camden National Plaza development and two contiguous properties. Voters were to decide whether to approve the plan during a special town meeting at 5:30 p.m., Wednesday, Feb. 19.

Under Maine law, a TIF district allows a municipality to take property tax revenue from new development in a certain geographic area and place it in a special fund for investment in infrastructure and economic development to serve the district.

The rise of total property value in a town as the result of a major development causes towns to pay more in county taxes and receive less in state revenue in the form of education subsidies and state-municipal revenue-sharing.

The new tax revenue from the TIF district is sheltered for up to 30 years from educational subsidy and revenue-sharing calculations, as well as county taxes.

Therefore, the town can use the new tax revenue without being penalized for its increase in property valuation through the loss of state funds or an increase in county taxes.

An estimated increase in valuation to $2.5 million within the next two to three years, as the property is developed, would generate an additional $36,579 in annual tax revenue for the town, Lutkus said.

The town intends to use the TIF funds as leverage to obtain matching grants that will enable the construction of a sidewalk and possible bike path along much of Main Street.

According to Lutkus, the plan is to connect the new sidewalk to the one that ends at Rising Tide Co-op, a sidewalk the developer will build in front of 435 Main St., a sidewalk that has been funded but not yet built at the corner of Biscay Road and Main Street, and the sidewalk and crosswalk built by Coastal Rivers Conservation Trust next to Great Salt Bay Community School.