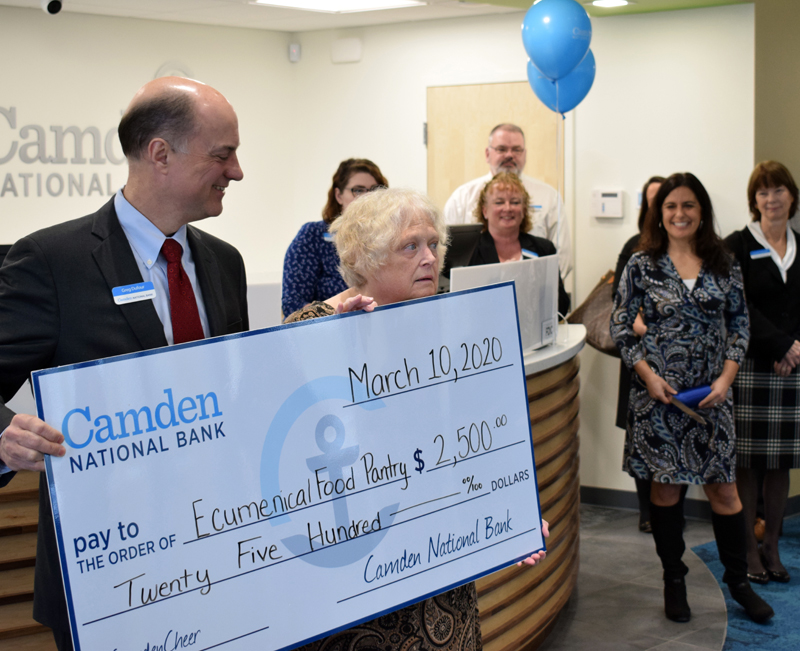 Greg Dufour, president and CEO of Camden National Bank, presents a $2,500 check to Jennifer Ober, president of the Ecumenical Food Pantry, during the grand opening of the bank’s new branch in Damariscotta. (Evan Houk photo)

Camden National Bank welcomed the local community during a ribbon-cutting ceremony and reception at its new Damariscotta branch on Tuesday, March 10.

The bank, which currently has 61 branches in Maine, moved up and across the street from 4 Coastal Market Drive, in the Coastal Marketplace, to the new Camden National Plaza, at 435 Main St.

Employees at the branch, which opened March 2, continued to serve customers throughout the ceremony, which was attended by more than 40 people.

Right as Dufour was beginning to speak, a customer pulled up at the drive-thru window directly behind him.

“The one thing about Camden National, the best thing is … there’s a customer here,” Dufour said to laughs.

“Damariscotta has a great, great tradition of nonprofit, community support. And I’m so proud that many of our individuals here and throughout our whole system volunteer for nonprofits, serve on their boards, giving their time,” Dufour said.

Dufour then presented an oversized check for $2,500 to Jennifer Ober, president of the Ecumenical Food Pantry. The pantry distributes more than 2,000 pounds of healthy food each week to residents of Damariscotta, Newcastle, Nobleboro, and the larger community.

Ober teared up as she explained how important the donation is to fighting hunger in Lincoln County.

Renee Smyth, executive vice president and chief experience and marketing officer for Camden National Bank, said the building’s open-concept design, combined with traditional Midcoast-style architecture, was inspired by the bank’s branch underneath a dormitory at Colby College in downtown Waterville.

Smyth said the glass surfaces on the exterior of the building allow more natural light in and, with energy-efficient LED lightbulbs inside the building, lower the bank’s energy consumption. 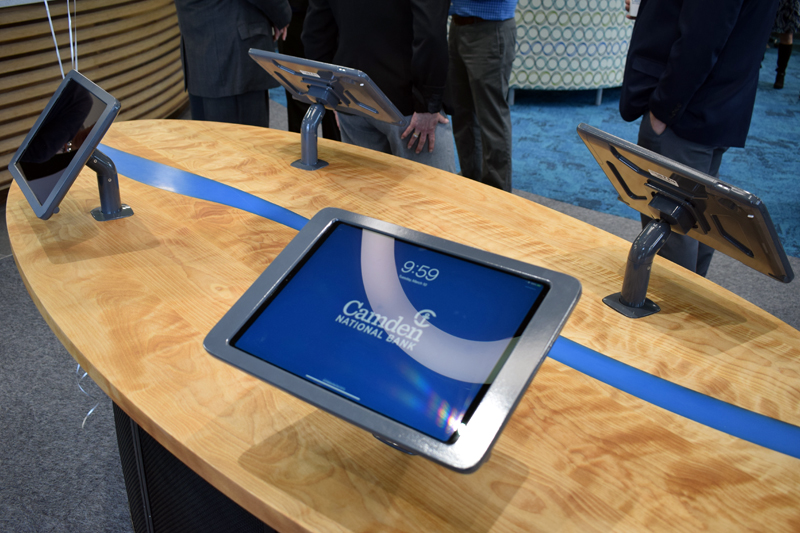 Four iPads are set up at the new Camden National Bank branch in Damariscotta for customers to learn how to bank online and fill out loan applications. The branch held its grand opening Tuesday, March 10. (Evan Houk photo)

Four iPads in the branch can be used for online banking and for Camden National’s online mortgage and business loan applications. Smyth said customers can come in and learn how to use the various online banking features on the iPads from branch employees.

Smyth said the use of iPads to fill out various paperwork will reduce paper use, in keeping with the modern and environmentally conscious theme of the new branch.

Smyth said Camden’s Hope@Home program, started in 2015, donates $100 to a local homeless shelter for every home financed through the bank.

She said this money has no stipulations and can be used however the organization sees fit.

Lutkus spoke to the importance of the opening of Camden National Plaza as a “new standard of development in Damariscotta,” before helping to cut the ribbon.

Lutkus also explained the process of creating a tax increment financing district around the Camden National Plaza development as a way to raise funds for completion of a sidewalk along much of Main Street.

Under Maine law, a TIF district allows a municipality to take property tax revenue from new development in a certain geographic area and place it in a special fund for investment in infrastructure and economic development to serve the district.

The rise of total property value in a town as the result of a major development causes towns to pay more in county taxes and receive less in state revenue in the form of education subsidies and state-municipal revenue-sharing.

The new tax revenue from the TIF district is sheltered for up to 30 years from educational subsidy and revenue-sharing calculations, as well as county taxes.

Therefore, the town can use the new tax revenue without being penalized for its increase in property valuation through the loss of state funds or an increase in county taxes.

The town intends to use the TIF funds as leverage to obtain matching grants that will enable the construction of a sidewalk and possible bike path along much of Main Street.

According to Lutkus, the plan is to connect the new sidewalk to the one that ends at Rising Tide Co-op, a sidewalk the developer will build in front of 435 Main St., a sidewalk that has been funded but not yet built at the corner of Biscay Road and Main Street, and the sidewalk and crosswalk built by Coastal Rivers Conservation Trust next to Great Salt Bay Community School.