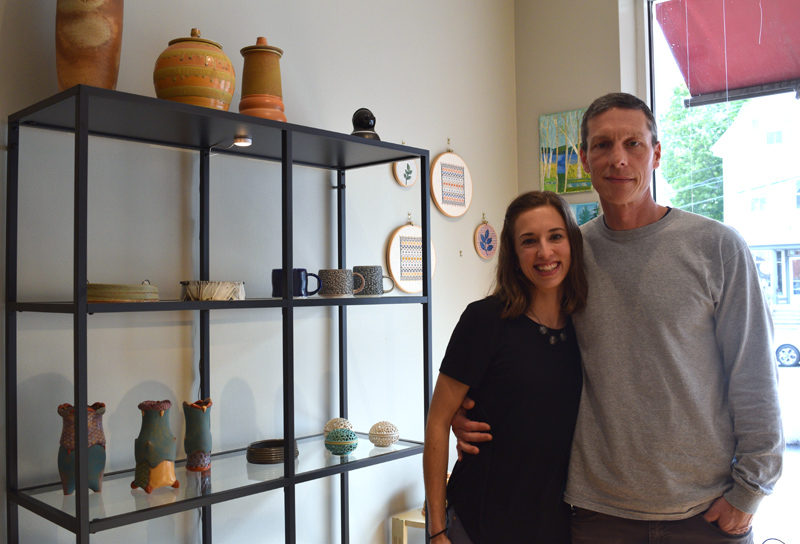 Midcoast Craft owners Heather and Dennis Chouinard stand next to a display of ceramics in their new gallery and shop in downtown Wiscasset. (Jessica Clifford photo)

An Edgecomb couple has opened Midcoast Craft, a ceramics gallery and working studio that also offers workshops and classes in downtown Wiscasset.

Heather and Dennis Chouinard have been opening the business in stages, starting with gallery showings during the Maine Pottery Tour in early May. The Maine Pottery Tour is an annual event on the first weekend of May in which pottery and ceramics studios across the state open to the public.

Dennis has a connection to Lincoln County through the Watershed Center for the Ceramic Arts, in Edgecomb and Newcastle. After working with Portland Pottery in the ’90s, he left to work with Chris Gustin, one of the three founders of Watershed. 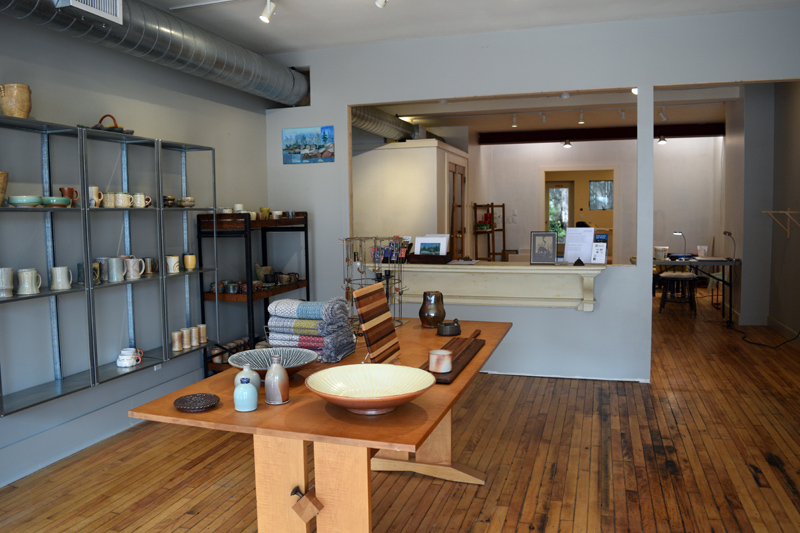 A view of the Midcoast Craft gallery and class space at 75 Main St. in Wiscasset. (Jessica Clifford photo)

Altogether, Dennis has over 20 years of experience making ceramics.

In addition to owning this shop, he continues to teach and make ceramics at Portland Pottery.

“It was really the best move we could make to move back to Maine, because it reconnected me to the history I had with ceramics and kind of where I started,” he said. “As soon as that happened, I was full-time ceramics again.”

Heather has always made art on the side while working in customer service.

The couple decided to open a shop in Wiscasset for a few reasons.

“He saw a sign in the window and stopped in and said, ‘Oh, this is kind of perfect,’” Heather said of the building’s layout for their business needs.

Wiscasset has a “revitalization feeling,” Dennis said. The village is undergoing major construction, but has seen the arrival of several new businesses in recent months. 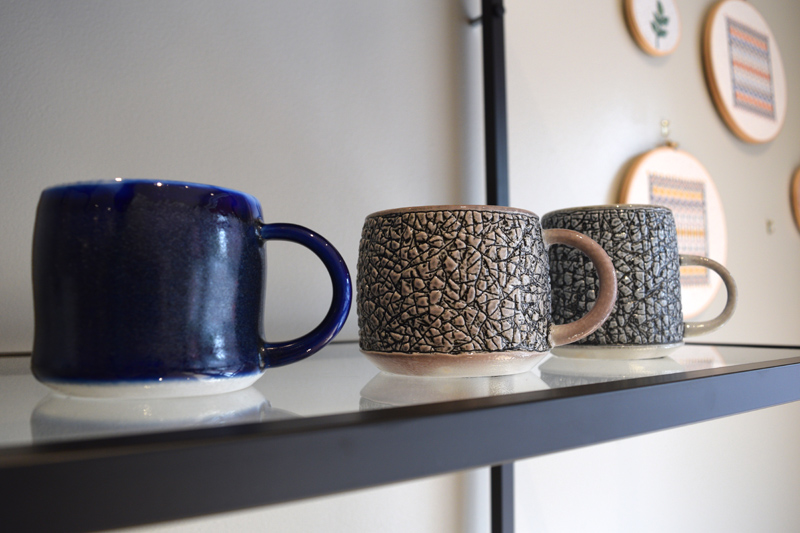 The Chouinards’ shop, at 75 Main St., is geared toward educating people about ceramics, Dennis said.

“Any time that we’re open, people that are shopping in the gallery can walk back and see what’s going on,” he said of customers visiting the art studio in the back.

Dennis described his ceramics as well-crafted, with each piece different from the last. He enjoys making the unique details in each piece as well as making the items functional.

“It’s not worrying about inventory, and focusing more on how well it’s crafted and the integrity of the piece,” he said.

Heather sells her painted wood jewelry in the gallery; however, she plans to add more items soon.

The goal for the gallery is to carry well-crafted, curated work from artists in Maine and other places.

“I would say my work and her work will be an equal portion to the other artists that we are going to curate in, so everyone will have enough space that they are represented,” Dennis said. 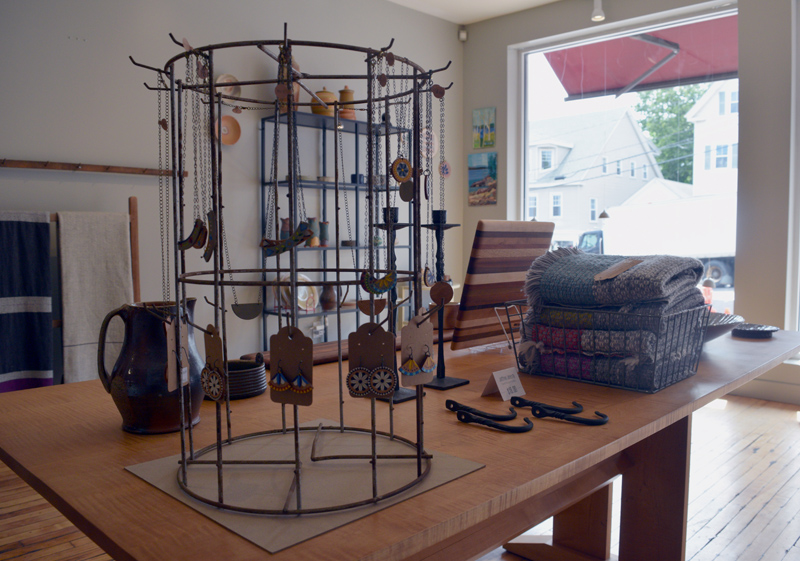 Wood necklaces and earrings made by Midcoast Craft co-owner Heather Chouinard for sale in the shop’s gallery. (Jessica Clifford photo)

The gallery is currently open from 10 a.m. to 5 p.m. Tuesday-Friday, with a short midday break.

Classes are offered for handbuilding ceramics and forming ceramics on a pottery wheel, said Dennis, who will teach the courses. There are six-week packages available for both topics.

For now, the classes are for adult beginners. However, Heather said Midcoast Craft hopes to start separate classes for children and teenagers in the fall or winter, and to schedule advanced-level classes in the future.

In addition to teaching ceramics, Dennis is interested in people “learning the crossover of mediums.” In the future, the couple plans to offer metalsmithing classes that would focus on jewelry-making. 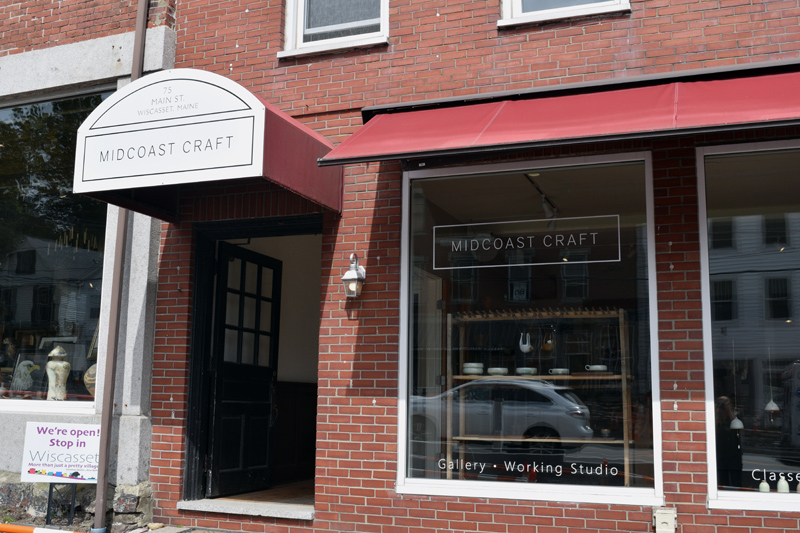 In addition to the six-week courses, Friday night workshops will be offered for students to learn about various craft projects from Heather.

“It’s fun because you sign up, you come hang out with people who like to do crafty things, and you leave with a finished product,” she said. Workshops will usually have six participants.

For the remainder of September, Midcoast Craft will offer two workshops on linocut block printing, a printmaking technique in which a design is cut into linoleum, usually mounted on a wooden block; and one workshop on papercut pressed floral, which uses layers of hand-cut paper to make a picture that appears similar to pressed flowers and foliage.

“I have all these things that I like to do as hobbies,” Heather said. “These workshops are almost me finding a use for all these little projects that I’m always doing.”

To see schedules and sign up for classes, go to midcoastcraft.me. To contact the owners of Midcoast Craft, email hello@midcoastcraft.me or call 687-8230.