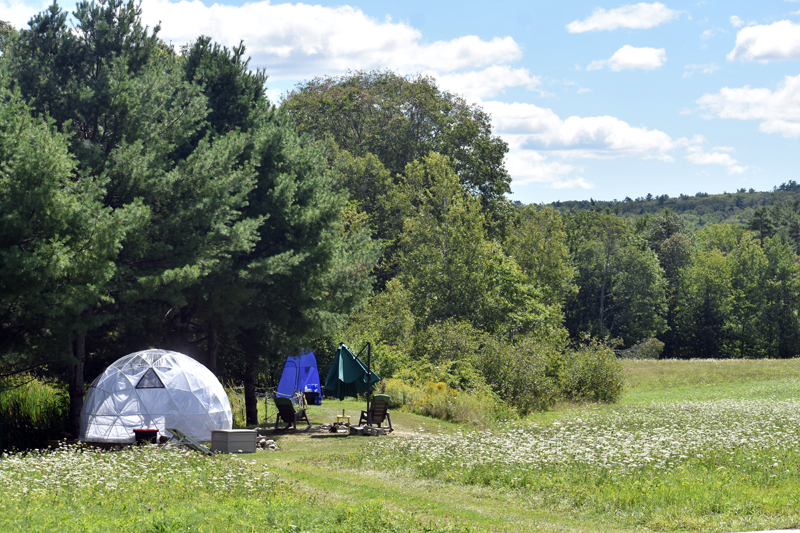 A growing business offers campers a memorable, four-season camping experience in Jefferson, where they can rest under the stars in one of three domes off North Mountain Road. 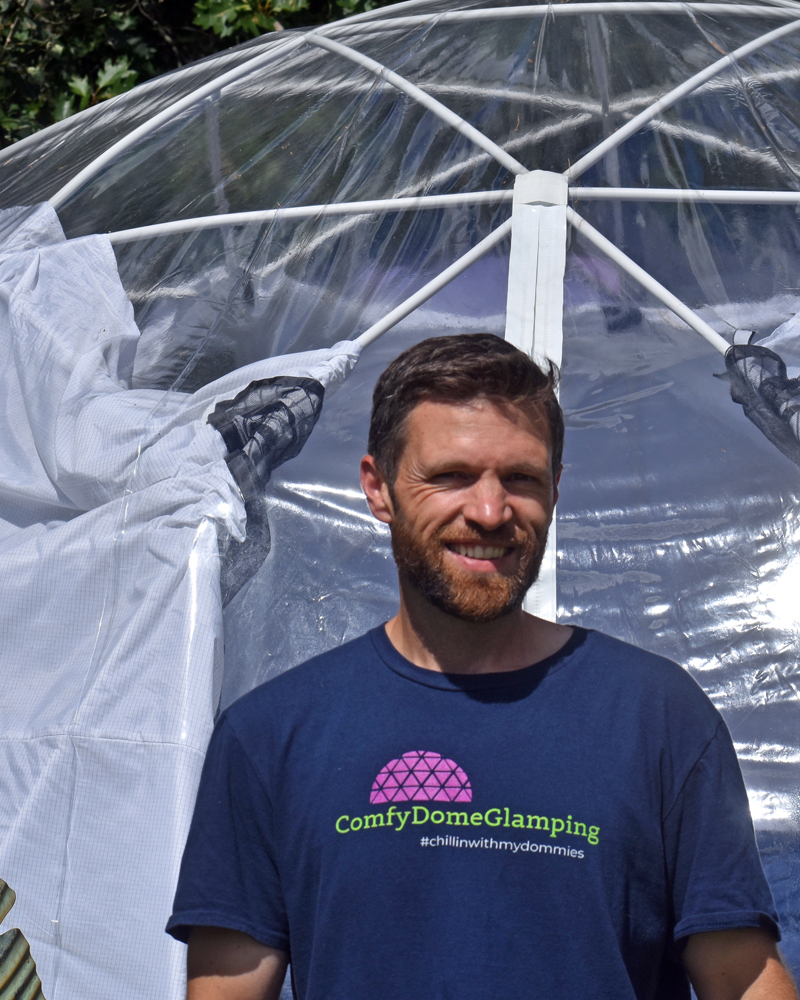 ComfyDome owner Seth Fraser in front of one of the three domes guests can rent on his property in Jefferson. (Alexander Violo photo)

Seth Fraser, of Jefferson, is in the third year of running the business, ComfyDome. He found inspiration for the business in an airplane magazine on a flight from Maine to Washington, D.C. The magazine featured a company in the Swiss Alps that used the dome structures to serve tea to travelers.

“I just stumbled upon the idea at first. I never intended to start a business,” Fraser said. “I thought it was a neat idea and I stored it in the back of my mind.”

Fraser, originally from Maine, worked in finance in Stamford, Conn. and Manhattan before relocating to Jefferson, where his parents had a farm by Clary Lake.

He moved to the North Mountain Road property about seven years ago and decided to clean up a small pond on the land so his daughter could skate during the winter.

“I started clearing the area and the idea popped into my head that it would be a good spot for one of the domes and I did some more research on it,” he said.

Fraser bought a dome and set it up with the intent of having his daughter use it, but when she pointed out how far it was from the house, he thought of opening it to visitors. He started his business with one dome before growing it to three.

Fraser said he didn’t really know what he was doing and had never used the vacation rental site Airbnb before, “but I posted it and within 24 hours we started getting bookings.”

In addition to bookings on Airbnb, Fraser said ComfyDome takes reservations through its own website, comfydome.com, and through other travel websites, such as booking.com and vrbo.com.

Fraser said interest in and bookings at ComfyDome have increased during the COVID-19 pandemic and although the business was closed in June, there has been high demand for campsites in July, August, and September.

“We are booked out until mid-October. There has been a big jump this year,” Fraser said, adding that the business has already started taking reservations for 2021.

Made from 100% recycled material, the comfy domes are popular with couples and groups and are suitable for year-round use.

Fraser describes the experience as glamping, or “glamorous camping,” a term that has come to describe camping with amenities or luxuries.

The geodesic domes are similar in appearance to large tents. They are in the same general area, around a small pond on the 13-acre property. ComfyDome offers hillside, pond-side, and woods-side locations.

Geodesic domes are thin-shell structures that distribute structural stress throughout the dome, allowing them to withstand heavy loads for their size.

The transparent domes give occupants a breathtaking view of the sky, but come with covers to provide privacy.

Each campsite has a fire pit, patio furniture, and solar power to keep fans going and charge cellphones.

Each campsite has its own camping toilet and the three campsites share an outdoor shower with hot water.

The site has telescopes and Fraser offers to instruct guests on how to use them to observe the night sky. He said there is little light pollution on the property.

Kayaks and paddleboards are available for rent during the summer and snowshoes during the winter, according to Fraser, who is working toward becoming a registered Maine guide.

The property is connected to ATV and snowmobile trails and is near West Branch Preserve in Somerville.

Due to the success of the business, Fraser plans to add two more domes in 2021.

“We are trying to grow in a manageable way. Every time we add something here we want to do it really well,” he said.

Fraser welcomes customer requests and has based many changes on recommendations from visitors. Some of these changes include the addition of hand-washing stations at each campsite.

Fraser said the business has developed relationships with local organizations, such as Hidden Valley Nature Center in Jefferson, to provide guests with recreational opportunities throughout the year.

“It’s an effort to expand what we offer as far as outdoor activities go. We want visitors to de-stress and connect with nature while they are here,” Fraser said. “We want to make sure everyone has a good time.”

Fraser’s original intent for the property was to turn the main building into apartments, “but the cost of doing that was not feasible,” he said.

The large building on the property was once the Curtis House, a home for girls and later a coed youth home.

Fraser said a lot of work goes into running the business, but he enjoys the lifestyle.

ComfyDome is at 99 North Mountain Road in Jefferson.