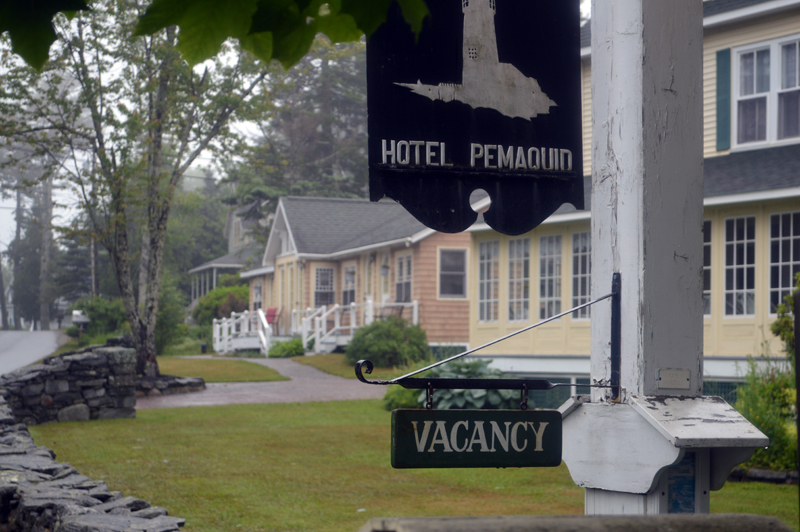 A vacancy sign hangs outside Hotel Pemaquid. The hotel is usually between half and two-thirds full at this point in its season; right now, only three units are in use. (Alyce McFadden photo)

About 85% of Ted Hugger’s guests have canceled their reservations at his Cod Cove Inn in Edgecomb this summer and, for him, the stakes could not be higher.

“My wife and I have put every single penny we’ve saved into this property,” Hugger said. “We’re struggling to stay alive.”

Hugger is not alone. With tight profit margins and significant overhead, inns and hotels across Lincoln County are struggling to get by during the coronavirus pandemic.

Martha Scudder owns and operates Oak Gables Bed and Breakfast in Damariscotta. All of her guests with reservations through the month of June and into July have canceled their travel plans.

“Many of them have been coming for years, and they become friends,” Scudder said. “It’s been very disappointing.”

Corinne Larson, who owns the Newagen Seaside Inn on Southport with her husband, typically collects the bulk of the inn’s revenue from hosting weddings on the inn’s waterfront grounds. This year, those are gone.

To make do without the weddings, Larson and General Manager Abby Fessenden have been scraping by with the help of some creative solutions. For the month of June, the inn offered “pay what you can” pricing to visitors from within the state.

“We got a lot of people onto the property who wouldn’t have come otherwise,” Larson said of her June visitors, who were all Mainers. “People have been really grateful that we did this.”

Charlie and Judy Duggan, co-owners of Hotel Pemaquid, have also been able to attract visitors from within Maine, as well as Vermont and New Hampshire, to the hotel’s free-standing cottages and rental units. These units allow guests to avoid common spaces and minimize the risk of infection.

“Everyone is in the outside units. No one is staying in the hotel,” Charlie Duggan said. “After they leave, we don’t even go into the unit for a few days.”

The Newagen Seaside Inn has been promoting 40-person weddings, provided guests meet the restrictions on travel imposed by the state. The promotion complies with a ban on gatherings of more than 50 people.

They haven’t seen much interest in their offer to host 40-person weddings, but Fessenden has noticed an increased demand for one service – elopements.

“Elopement inquiries have just exploded,” Fessenden said. “We typically have some, but every week the number has been up.”

Across the board, the hotels are operating on skeleton crews to accommodate twin problems: budget shortfalls and labor shortages.

The Newagen Inn has been struggling with the latter. During the busy summer months, the inn typically relies on student workers from Europe who come to the U.S. through the J-1 visa program. Even this year, its year-round crew of 15 is struggling to keep up.

“We’re getting it done,” Larson said. “We’re very careful about having 72-hour buffers between guests in rooms, and that has helped us keep up.”

“It’s all hands on deck, though,” Fessenden added.

Charlie and Judy Duggan decided not to rehire four of the six housekeepers they usually employ during the summer season in order to save some of the money they lost as cancellations rolled in.

The Duggans, Hugger, and Fessenden have all spent hours on the phone answering questions and fielding safety concerns from prospective guests who want to visit Maine but aren’t clear on what that visit would look like.

“The process of taking reservations is taking five times as long,” Fessenden said. “People just want to talk and talk.”

The Duggans are happy to try to answer guests’ questions, but sometimes they don’t know the answers themselves. Of particular frustration to Charlie Duggan is the scarcity of COVID-19 tests available to travelers without symptoms, a reality that all but voids Gov. Janet Mills’ provision that out-of-state tourists can skip a two-week quarantine period if they obtain a negative test result within 72 hours prior to their arrival in the state.

“She says there are testing centers, but we can’t get into them unless you have symptoms or a doctor’s referral,” he said. “Why don’t they have testing at visitor centers, or at toll booths?”

Hugger said that, unless something dramatic changes soon, the hurdles guests must clear to visit the state are just too high.

“Even if they can get tested in Maine, it costs $150,” Hugger said. “And no one is going to sit in a hotel room for two weeks to quarantine. No matter how creative you are, no one is coming across the border into Maine.”

Judy Duggan hopes that the damage to her business, though painful, won’t be lasting. With some of Hotel Pemaquid’s guests opting for vacations in states that have reopened, she isn’t sure what next year will bring.

“Many people have told us that they feel that they are not wanted in Maine,” Judy Duggan said. “Why would they come back to a place that wasn’t welcoming?”

Scudder, meanwhile, isn’t worrying too much about the long term.

“You have to take it one day at a time, and just hope it gets better,” she said.