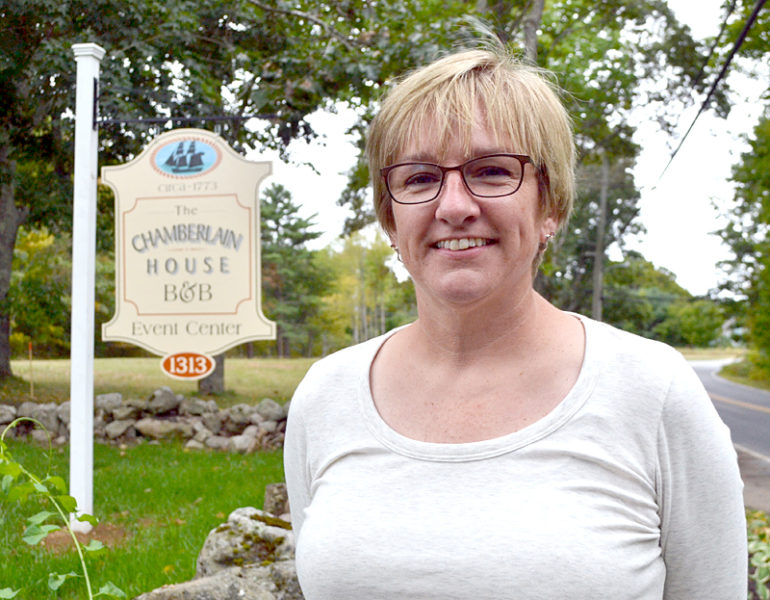 Shari Cunningham stands in front of the sign for The Chamberlain House B&B and Event Center at 1313 State Route 32 in Round Pond. (Maia Zewert photo) 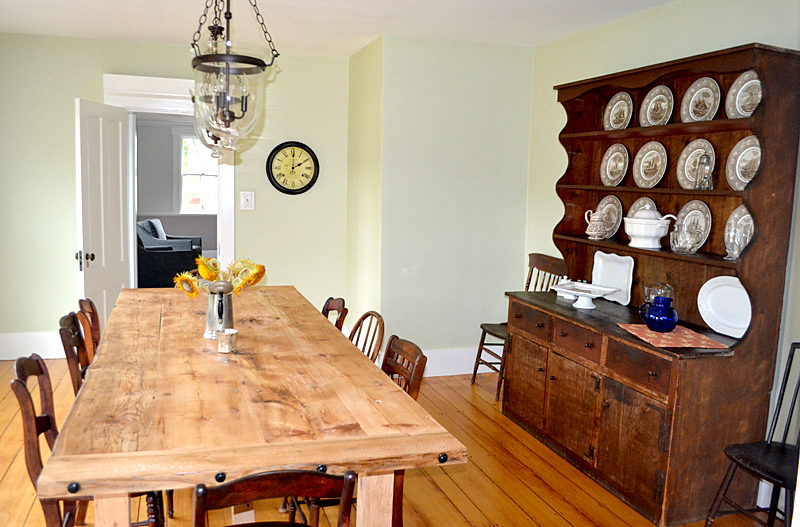 One of the two dining rooms for guests of The Chamberlain House B&B and Event Center. The home is available to rent for private functions. (Maia Zewert photo)

One of the oldest houses in Round Pond has found new life as a bed-and-breakfast and event center.

Shari Cunningham, of Round Pond, along with her husband, Paul Cunningham, have opened The Chamberlain House B&B and Event Center at 1313 State Route 32. The Cunninghams also own and operate C.W.C. Boat Transport Inc.

The property has a rich history in Round Pond dating back to the 1770s, when the Rev. Alexander McLain built the farmhouse.

Five families have lived in the home in the past 240 years – the McLains, the Chamberlains, the Bowies, the Frenches, and most recently, the Cunninghams.

The 12-acre property, which includes 65 feet of waterfront, was listed for sale in 2015 by Susannah French. Shari Cunningham attended an open house and knew almost immediately she wanted to purchase the property.

“I walked inside and just knew,” Cunningham said. “I had always wanted to do this. As soon as I saw the house, I knew we had to try this.”

Cunningham is not new to the hospitality business. Her parents owned the Pioneer Motel in Edgecomb.

The Cunninghams closed on the property in October 2015 and started renovations in March. The first guest room was available in September, Cunningham said.

“It’s taken an army of family, friends, and subcontractors to get to this point,” Cunningham said.

The original layout of the house was kept the same in an effort to preserve as much of the integrity of the home as possible, Cunningham said.

The floors throughout the home were either redone or restored, as was the kitchen.

“We discovered the original hardwood underneath tile when we were restoring the kitchen, so we brought that back,” Cunningham said. 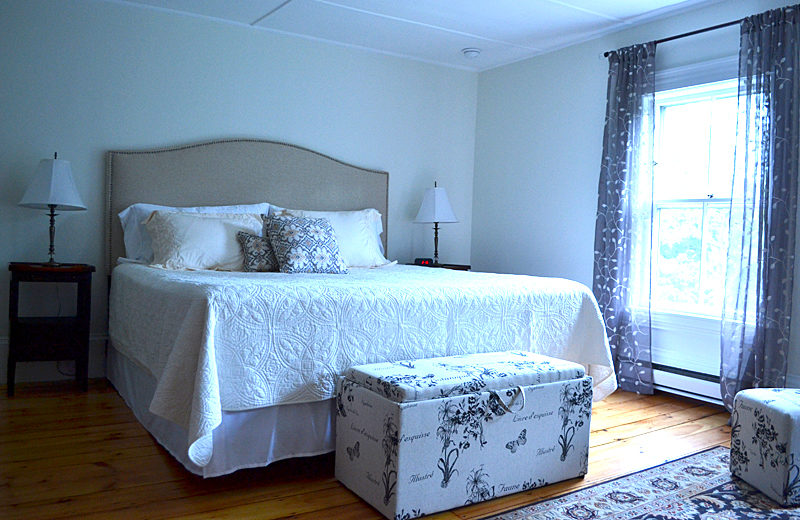 Rooms were remodeled to transform seven bedrooms and two bathrooms into five bedrooms, each with a private bathroom.

The rooms are named after the five families who owned the home. Instead of Cunningham, however, the room named for the current owners is Nichols after Paul Cunningham’s great uncle.

Cunningham is the owner and the operator of the bed and breakfast. Her husband, Paul, is the “maintenance man,” she said.

Cunningham plans to keep the business open year-round. Some of the rooms have already been reserved for Christmas, she said.

In addition to the bed-and-breakfast side of the business, The Chamberlain House has hosted a variety of events, including book clubs, birthday parties, and other functions. Cunningham also plans to complete a renovation of the two barns on the property and add an outdoor kitchen.

Cunningham said she hopes to continue to expand the event center part of the business and will host weddings on the property as well.

“The possibilities are really endless depending on what people want to do,” she said.

Cunningham will host an open house at the property on Sunday, Nov. 6 from 1-4 p.m. There will be guided tours through the home and refreshments will be served.

The Nov. 6 event is the second of two open houses Cunningham has planned. The first, which took place in September, drew a large crowd, primarily through word of mouth, Cunningham said.

“There has just been a whirlwind of community support,” Cunningham said. “I’m very grateful for that.”

For more information, visit thechamberlainhouse.com or find The Chamberlain House B&B and Event Center on Facebook.

One of the oldest homes in Round Pond has recently been converted into a bed-and-breakfast and event center by Shari and Paul Cunningham. The Chamberlain House B&B and Event Center is available for overnight stays and private functions. (Maia Zewert photo)