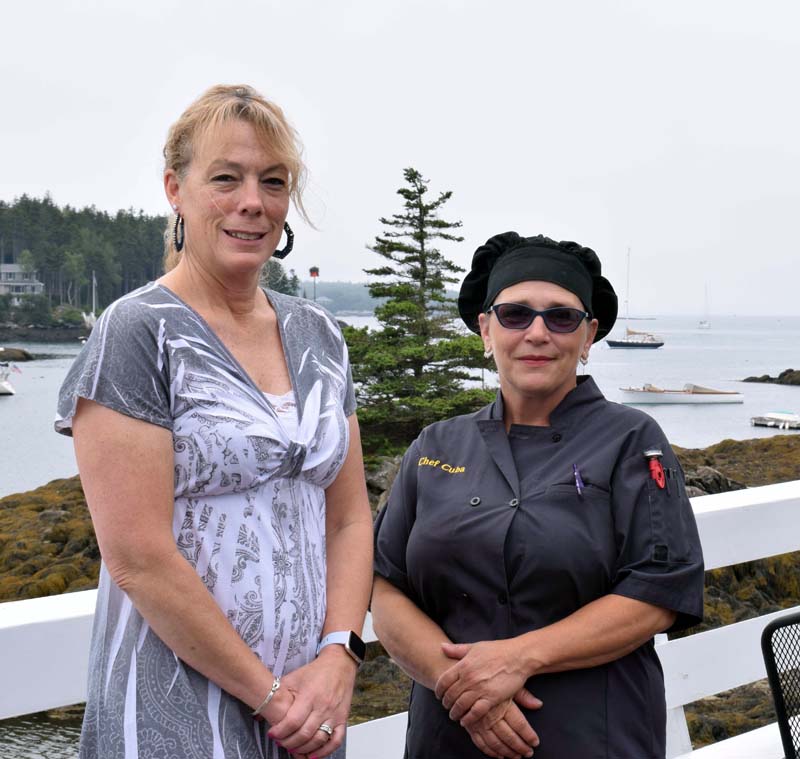 Coveside Restaurant and Marina in South Bristol is back to business, but not as usual, under new management and with a new chef – offering a traditional seaside menu with Cuban flair.

Lynette McGowan, a longtime employee of the restaurant, took over the business in September 2019 and opened the popular Rutherford Island destination for the season June 25, about a month later than normal.

McGowan took over the management of Coveside from Alex Nevens, co-owner of the Newcastle Publick House and Oysterhead Pizza Co., of Damariscotta.

McGowan said the coronavirus emergency presented a litany of challenges, forcing her to delay reopening and reexamine her entire business plan. She nearly decided not to open the restaurant at all this season.

“Everything was going well. I was very prepared – music, staff, menu, chef, everything … and then March hit,” McGowan said with a resigned laugh in a Friday, July 10 interview.

Coveside is open Thursday-Sunday from 11:30 a.m. to 9 p.m., down from the seven days per week of a typical summer season. McGowan said she will stay open until at least Labor Day.

Coveside is asking customers to make reservations whenever possible, especially for the dockside parties on Sundays from 2-5 p.m.

One thing the coronavirus did not change was the hiring of Coveside’s new head chef, Doris Rodriguez. McGowan brought Rodriguez on board last fall after they hit it off in an interview. 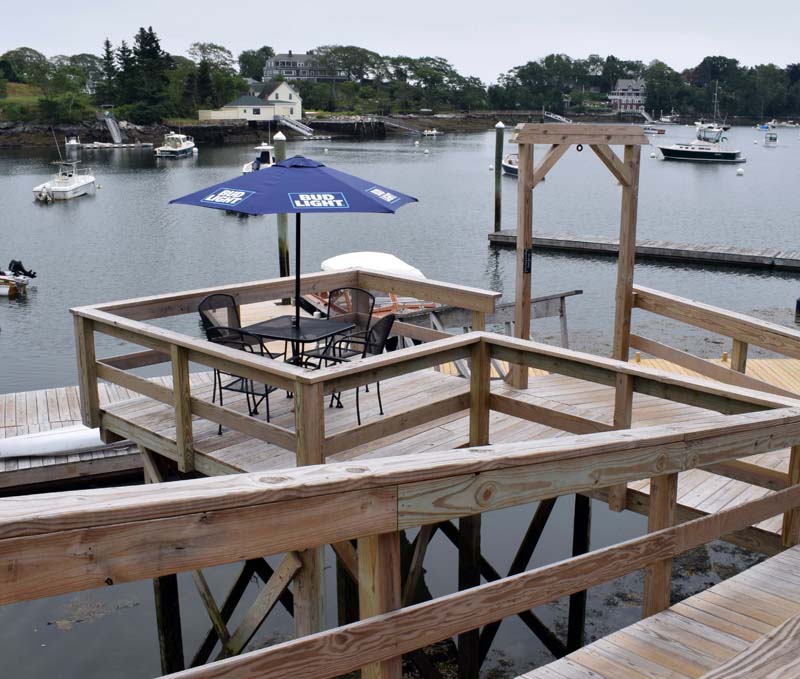 “The first meeting was two hours and we just connected right away; we were right on the same page with everything. She’s an amazing woman to work for,” Rodriguez said Friday.

Rodriguez, who has worked all over the country during her 30-year career as a chef, said she wants to focus on Maine seafood basics while adding some Caribbean flavors. She learned how to cook Caribbean food from her Cuban father.

“Dad cooked professionally, but when he cooked at home it was like a show. He took such care and he was always very passionate about his food. The dishes were beautiful,” Rodriguez said.

The menu includes fried baskets of calamari, clams, haddock, or scallops, all of which come with french fries. It also includes fresh, local lobster and a lobster roll, bacon-wrapped scallops, shrimp cocktail, fish tacos, and a pulled pork sandwich topped with onion rings.

Rodriguez said her signature dish, which has been very popular, is the Coveside Salmon Salad.

She likes to use edible flowers grown in a raised garden bed at the restaurant to add flavor and color to dishes.

McGowan stressed the importance of a good chef for gaining the support of the community and growing the business.

“If the food’s not good, you don’t have anything,” McGowan said. 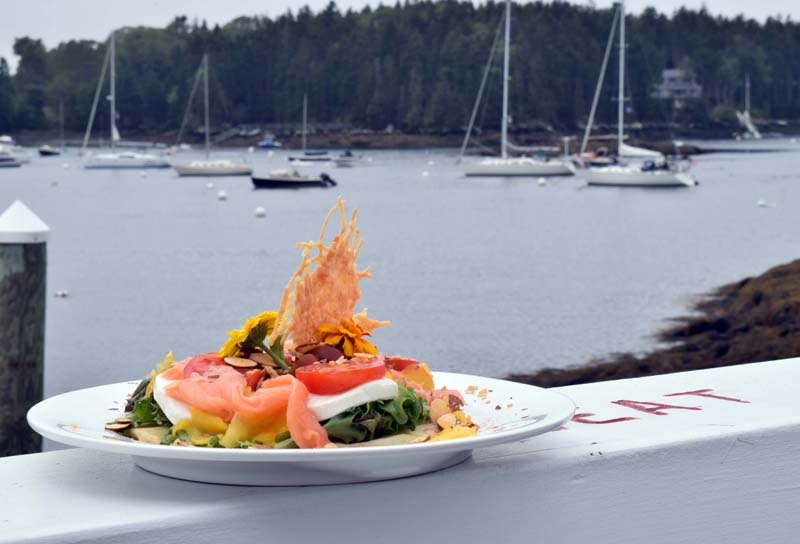 She said there has been tremendous feedback on the menu, saying it is “different, but what people are looking for.”

Rodriguez credits a solid team of cooks and McGowan’s hands-on management style with the food’s popularity and success.

“They’re right on top of things, they’re eager to learn. If I ask them to make an adjustment, they make the adjustment. They’re taking pride in how each plate comes out. The food tastes good, the food looks good,” Rodriguez said of the cooks.

McGowan wants her staff to feel comfortable approaching her with any issue. “I’m here from the second employees walk in the building until the last employees walk out the door,” she said.

The coronavirus has changed many things at Coveside – one being that live bands will only play Sunday afternoons, rather than the typical Friday-Sunday lineup.

The first dockside party on Sunday, July 12 went well, McGowan said, noting that patrons were conscientious and respectful with regard to public health concerns.

“It’s brand new for everybody,” McGowan said of the restaurant business during the pandemic.

All employees must wear face masks outside the kitchen and patrons are asked to wear masks until seated. Disposable face masks are available.

Capacity is down somewhat – from 140 to 120 – with many tables bearing signs saying they cannot be used because of the requirement for physical distancing. 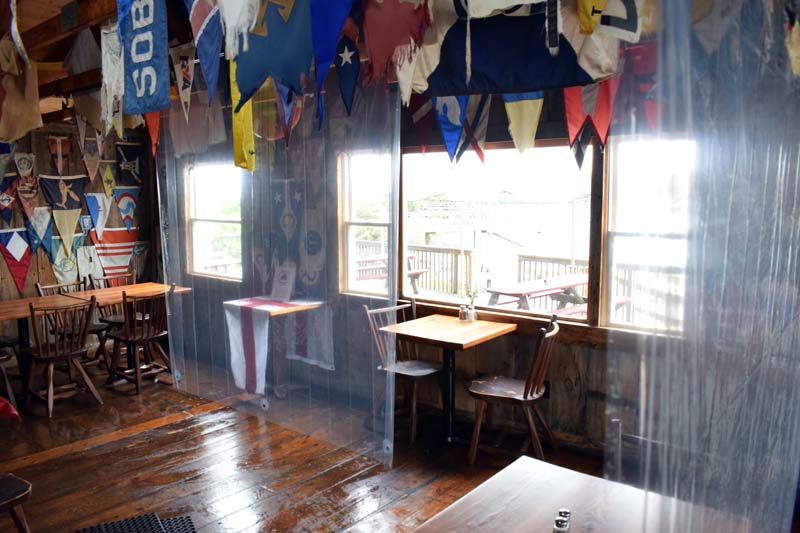 There are also plastic curtains hanging between tables and different areas throughout the interior of the restaurant, as well as markings on the deck floor to indicate 6 feet of distance.

The side deck is now being used for dining, which affords some extra outdoor space. Coveside also has a front deck and a few exclusive private decks – the bistro and dockside tables – that afford patrons some extra space and privacy.

There are scenic views of Christmas Cove from nearly every seat in Coveside. The views inside are nearly as interesting as those outside – in the Burgee Bar, colorful burgees from all over the world hang from the rafters. A burgee is a distinguishing boating flag.

McGowan, a lifelong resident of Lincoln County, started catering 26 years ago and said she keeps getting sucked back into the restaurant business.

“It is a love-hate relationship,” she said of the frantic nature of the industry. “I’ve found the restaurant business is where I want to be. This is my passion.”

Rodriguez has been living in Maine since she fell in love with the state 20 years ago.

“It was a rainy day, I was at the Portland Head Light, the fog and the rain and the waves crashing – I felt like I was home,” Rodriguez said.

McGowan said business is down slightly from last year but steady, and she is optimistic about the future.

“The community down here has been very supportive. They want to see it succeed,” McGowan said.

“We’re all going to work together to do the best job we can in the short amount of time we have to do it. But work as a total team effort – no matter who you are, you’re not above anybody else for any work that needs to be accomplished,” she said.