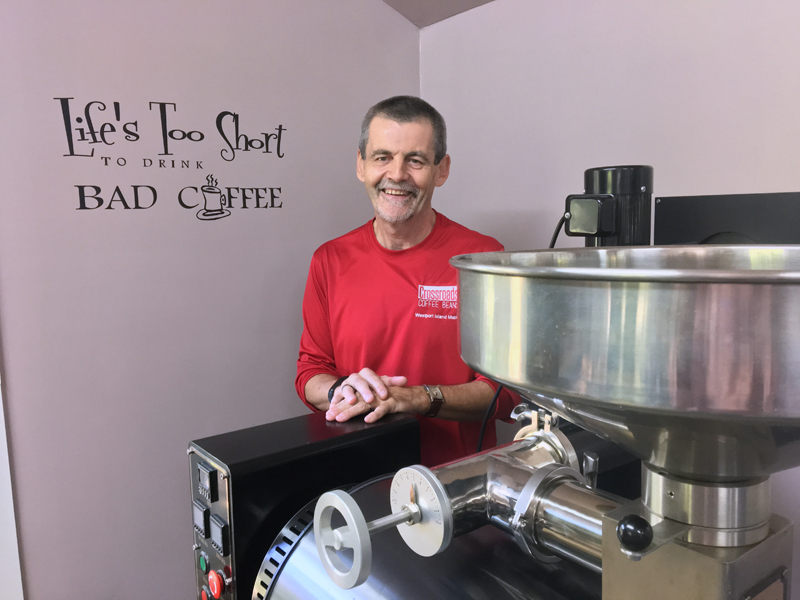 Most Americans who drink coffee – and according to foodandwine.com, Americans are drinking more than ever – either brew it in their kitchen or pick up a cup at a specialty coffee shop, restaurant, or takeout window.

But Steve Arsenault took it a step further. He was curious about where his coffee was coming from, and how it got from a bean to his cup.

One day in 2005, when he and his wife, Anne, were living in Gray, he was in Portland looking for a good cup of coffee. “Back then there were one or two good places to get good coffee, but not a lot you could buy to brew at home,” Arsenault said.

“I wanted my coffee to taste good and I wanted to learn about the process,” he said. “How does it get from Rwanda to my cup?”

He started researching home roasting and learned that he could use a popcorn popper to roast coffee beans. “There’s a portion of the process called ‘first crack,’” he said. “And it sounds like popcorn popping.” 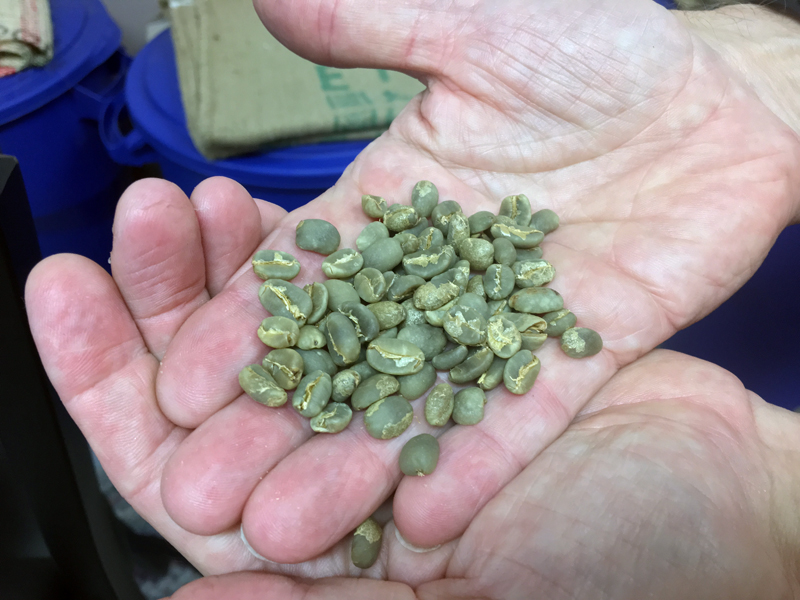 Around the same time, the University of Southern Maine was offering a course on coffee roasting. Arsenault and a friend took the class. They learned about the harvesting of coffee beans, their origins, and roasting.

He was hooked. He bought a small roasting machine, while his friend splurged and bought a bigger, Diedrich roaster. “He thought it was the greatest thing since sliced bread,” Arsenault said with a smile.

Arsenault eventually bought that machine from his friend. He established Crossroads Coffee Beans in Gray in 2006. The name comes from the town’s geography. “To get anywhere west, you have to go through Gray,” he said.

The Arsenaults moved to Westport Island in December 2016, and in January he bought the 8-pound drum roaster he now uses for the business.

Coffee beans come from a coffee cherry. They’re seeds, or pits, of the cherry. Just like the cherries at the grocery store, coffee cherries are bright red when ripe. They’re harvested from trees and there are only two beans in each one. The beans are green. 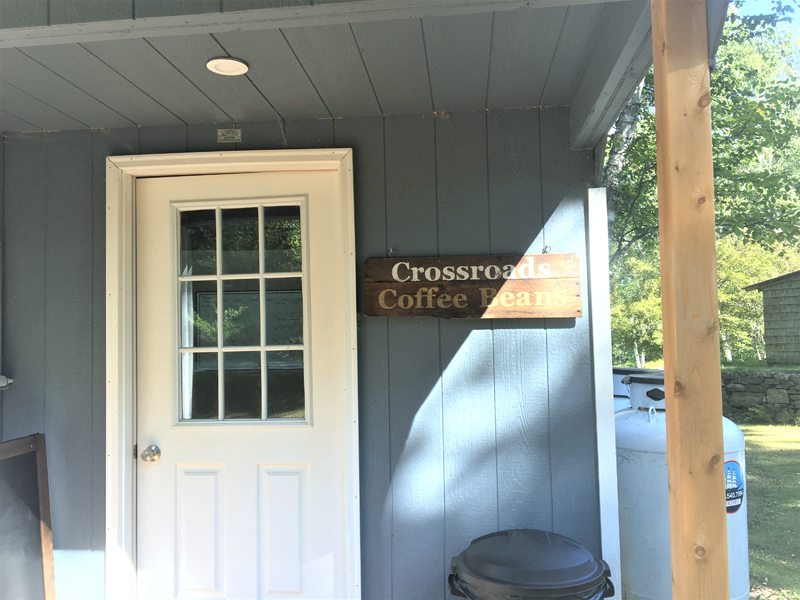 The entrance to the small building where Steve Arsenault roasts his coffee beans on Westport Island. (Suzi Thayer photo)

Brazil is the only country that uses machinery to harvest the cherries, according to Arsenault. Everywhere else they are picked by hand.

So how did someone come up with the crazy idea of harvesting those seeds from the cherries, roasting them, and turning them into what is arguably the most popular beverage in America? 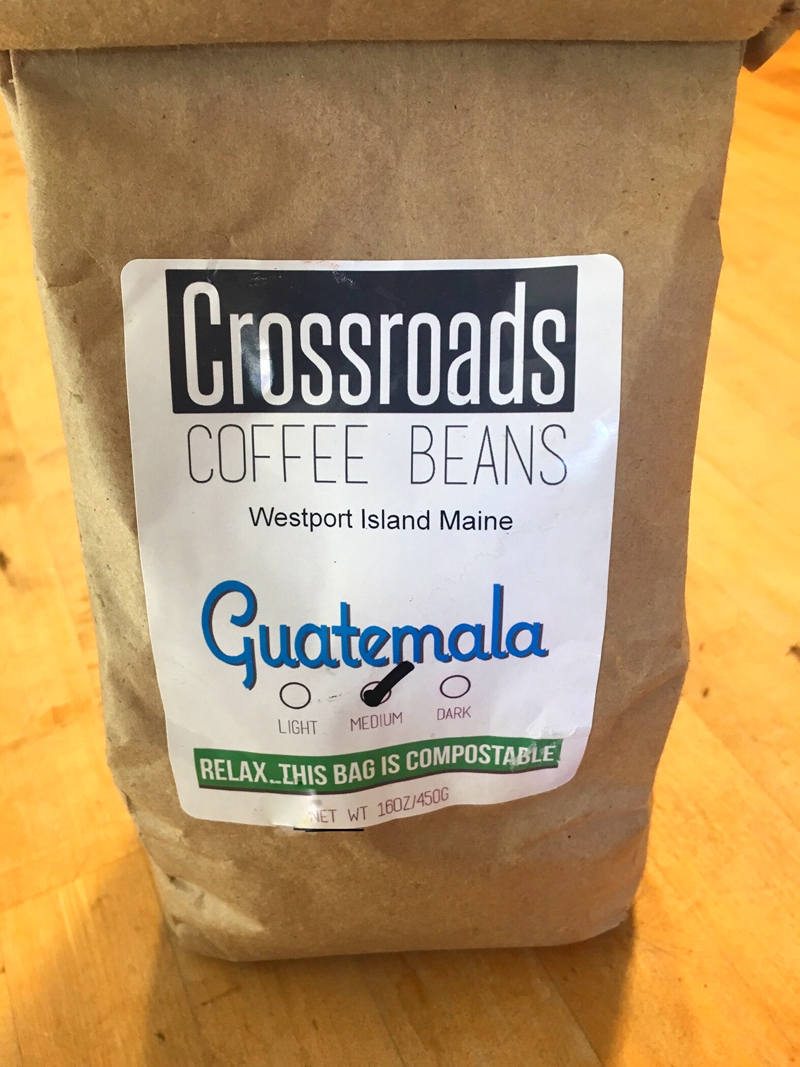 “Relax … this bag is compostable,” reads the label on a bag of Crossroads Coffee Beans. (Suzi Thayer photo)

“The fable is that there was an Ethiopian goat herder named Kaldi over a millennium ago,” Arsenault said. “He was herding his goats, and all of a sudden the goats were jumping around the field.” He found that they were eating the cherries off the nearby coffee trees, and that the caffeine was causing the hyperactivity. As the fable tells it, Kaldi tried a few of the cherries for himself “and was soon prancing and pirouetting just like his goats.”

There are 150-pound burlap bags full of beans from Brazil, Columbia, and Indonesia in the small building on Westport Island that houses Arsenault’s business. He offers a dark roast, a medium dark, a medium, a light medium, a light roast, and a decaf.

There’s also the option of half-caf, and Arsenault makes sure the mix tastes good. “If people are drinking decaf, they’re looking for flavor, so I take the time to make sure to use a good combination of beans.”

A common misconception is that the darker the coffee, the more caffeine is present. A lighter roast contains more caffeine. The longer the roast, the more moisture leaves the bean, and the caffeine goes with it.

“You take a dark, bold cup of coffee, and you think, ‘Wow, this must be full of caffeine!’” Arsenault said. “If you want that buzz in the morning, it’s the light roast you want. It’s kind of counterintuitive to the flavor of the coffee.”

The beans and ground coffee are packaged in brown paper bags suitable for the compost pile. The lining of the bags is made from a derivative of corn.

Arsenault will be roasting beans throughout the winter in the little building. He invites customers to stop by some cold winter morning and pick up a bag of fresh-roasted coffee. If they’re lucky, he might brew them a cup and talk about the finer points of coffee.

Crossroads Coffee Beans sells its products wholesale, as well as by the pound at crossroadscoffeebeans.com. The beans are available at Lois’ Natural Marketplace in Scarborough, the Portland Food Co-op, Town Landing Market in Falmouth, Bow Street Market in Freeport, and Wildflours Gluten-Free Bakery in Brunswick. 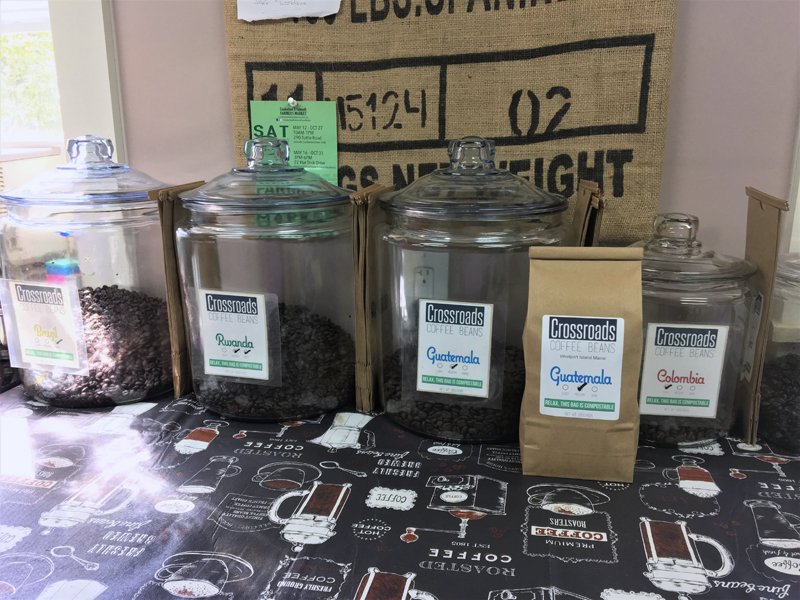 A display of roasted coffee beans from all over the world at Crossroads Coffee Beans in Westport Island. (Suzi Thayer photo)

Crossroads Coffee will be available by the cup and eventually by the bag at a new gourmet coffee and smoothie shop, Spruce, opening soon in Wiscasset. Owner Julie Ambrosino said she’s been a fan of Crossroads Coffee for several years. “We love Steve’s coffee, and we’re very excited to be able to offer it to the Midcoast community,” she said. Spruce will open Saturday, Oct. 20.