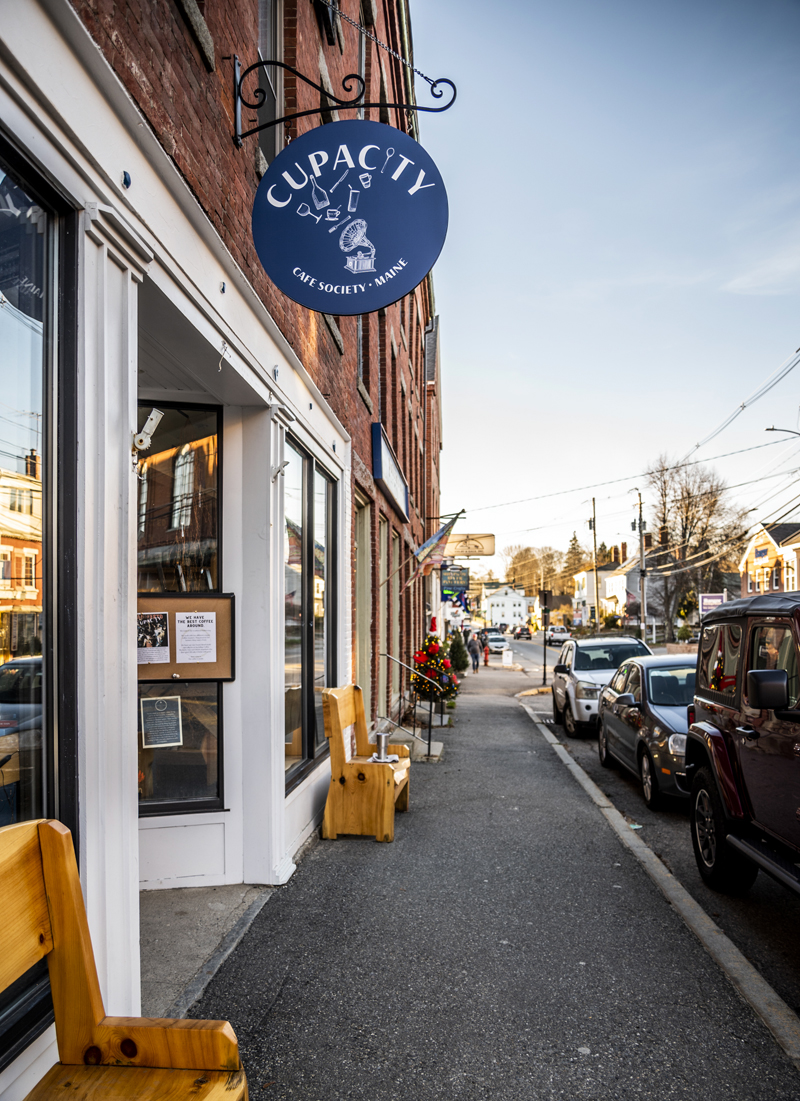 Cupacity, Damariscotta’s cafe society, has closed its doors. Cupacity filled a unique role among the businesses of Main Street; it became a gathering place where locals and tourists mingled over coffee in the morning or cocktails in the evening.

“We’re kind of an unusual town in that a lot of different kinds of people cross each other’s path,” said entrepreneur and restaurateur Susan Murphy. “And I wanted to be that place where they converge and the differences are not so important.”

“There are just threads of creativity and life from every person that walks in here,” Murphy said. “I think … the vibe in this space invites people to share who they are.”

Murphy points out books and art that were brought in, “given to the space” by customers. She feels the history of every piece.

Murphy fell in love with the building at 133 Main St. and purchased it in 2018. Cupacity opened for business in May 2019. The curated space with its wall of wine near the front windows, its elaborate tin ceiling, its books and art and pop culture posters, and its twilight view of the Damariscotta River from the back deck encompasses an experience that was finally flourishing.

Murphy had been going “full tilt” for three years, starting a business from scratch, keeping it going through a pandemic, through supply chain interruptions, through staffing shortages, through her own inexperience in the industry. She was finally succeeding, seeing consistent double-digit growth and building the community she dreamed of, but it wasn’t sustainable.

“The cost of goods is off the charts, the cost of labor is higher, as it should be, and we’re not selling enough,” Murphy said.

“I don’t know what’s going to happen – I’m exhausted,” she said during an interview in the back bar just before Thanksgiving. “I can’t work seven days a week and not make money.”

Murphy has also found it increasingly difficult to balance business and family. She has 12-year-old twins and a husband. She thought she would have more time with them during the pandemic, but found she was working more than ever just trying to make something happen.

“With staff shortages I fill every gap,” she said. “My kids have had less and less of me and I come home and I have nothing to give.”

“I think a lot of the mistakes were mine,” she said regarding what caused the business to close. “I could have run a tighter ship, been leaner in my spending.”

“People didn’t quite know what we were because we were still figuring it out … We made so many pivots,” she said. “I always had a sense of what was coming around the corner but I always caught it too late.”

She had both failures and successes as she worked to define the business. Through the pandemic she and her staff brainstormed ideas to keep the money coming in. They “coffee-bombed” local merchants to get their name out, bringing in free urns of hot coffee to share with the employees. They tried delivery but Murphy admits it was “a total failure.”

There were big wins. The installation of an air purification system allowed customers to patronize the business more safely during the pandemic. Partnership events with other local merchants were well received. A benefit for Haiti brought in thousands of dollars for earthquake relief. A socially distanced pandemic showing of “The Rocky Horror Picture Show” in the parking lot became an annual event so popular that Murphy said she plans to make it a condition of the lease for any future tenant.

Murphy dreamed of a coffeehouse community, a “cafe society” like those that formed in New York, Paris, and London during the early part of the 20th century. She wanted poetry readings, storytelling, music, good food, special events where everyone was welcome.

“Even the way I set up the chairs. You’re going to inevitably bump into somebody else and you’re going to turn around and talk to them,” she said. “It was about a bunch of people sharing a meal and people loved it and I loved it. I wish I could have made a living doing it,” she said.

Murphy said she will miss her “amazing staff” who deserves recognition for all their passion and creativity and hard work. She will miss the customers she got to know, some of them now lifelong friends.

Murphy is in talks with people who are interested in leasing the space, but said she needs time and rest to make the right decision. “It’s so much more than a table-turning business to me,” she said.

She is also not ruling out another try herself, a Cupacity sequel, although she does not know what form it may take.

It’s the relationship I have with this space,” she said. “I want to honor it. I think there’s something alive here.”