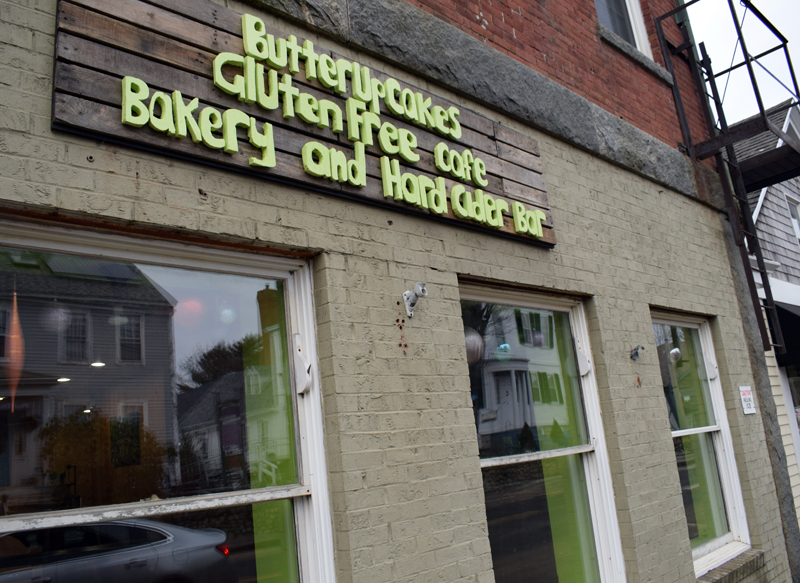 The entrance to Butter Up Cakes, at 133 Main St. in Damariscotta, on Wednesday, Jan. 13. The gluten-free bakery and cafe will hold a grand opening on Saturday, Jan. 16 starting at 6 a.m. (Evan Houk photo)

The Damariscotta Board of Selectmen approved a liquor license application from Butter Up Cakes, at 133 Main St., after a public hearing on Wednesday, Jan. 6.

Butter Up Cakes, a gluten-free bakery, cafe, and hard cider bar, is planning a grand opening for Saturday, Jan. 16.

There was no public comment, but owner Patrick Brady was present in case there were any questions.

“We’re very excited to come aboard,” Brady said after thanking the selectmen for approving the license.

According to the cafe’s Facebook page, the grand opening will feature “lots of fun,” as well as contests and food.

Brady said by phone on Tuesday, Jan. 12 that the grand opening will be a good chance to get introduced to the neighborhood and “to get people introduced to our products.”

Butter Up Cakes will be open from 6 a.m. to 6 p.m. Tuesday-Sunday. It will be closed on Mondays.

Butter Up Cakes will give people with food allergies a place to find gluten- and dairy-free options. The business will also offer some sugar-free, lactose-free, vegan, egg-free, and dye-free options.

According to the Facebook page, the only food option Butter Up Cakes appears unable to offer is nut-free goods, since the cafe uses various nuts.

The bakery will offer cakes, cookies, Danishes, and muffins, as well as bagels and sandwiches. The business will also offer Maine-made and gluten-free beer and hard ciders at its hard cider bar.

Because of ambiguity in the town charter, Town Manager Matt Lutkus is proposing a charter amendment that would allow the town to create new standing committees. This will ensure the town did not violate the charter by creating a historic preservation review commission as part of the new historic preservation ordinance.

“That way we’re safe in case there is ever a challenge to the authority of the commission,” Lutkus said.

He said the process for approval of the charter amendment would be similar to the way the town passes ordinances. Voters will decide the matter in a referendum — the same method planned to vote on amendments to the historic preservation ordinance that passed in March 2019.

Lutkus said that according to the town charter, the town can create committees, including ad hoc committees, but the charter also lists specifically what standing committees the town has.

“It doesn’t specifically or expressly say that the town meeting, by ordinance, can create additional commissions,” Lutkus said.

The board of selectmen did not object to the suggestion.

During the selectmen’s discussion portion of the meeting, Selectman Mark Hagar addressed the situation unfolding in Washington, D.C. on Wednesday.

Supporters of President Donald Trump broke into the Capitol building on Wednesday, Jan. 6 in an effort to halt the certification of Electoral College ballots by Congress. Earlier in the day, at a rally near the White House, Trump had repeated his debunked claim that he won the election by a “landslide” and urged his supporters to march to the Capitol.

“What’s going on in Washington today is a perfect example of somebody that’s using their position to try to make a statement about themselves,” Hagar said. “I think what we have to realize is being a selectman, or a senator, or house of representatives, you have to realize that that position is actually bigger than ourselves. We’re here to represent the people that we represent.”

In other discussion items, board Chair Robin Mayer noted the continued donation of face masks from the Damariscotta-Newcastle Rotary Club. She said the club recently donated an additional 1,000 masks to the Damariscotta Police Department.

“The Rotary has been such a good partner through the pandemic in supplying the town and others with some of the equipment they need,” Mayer said.