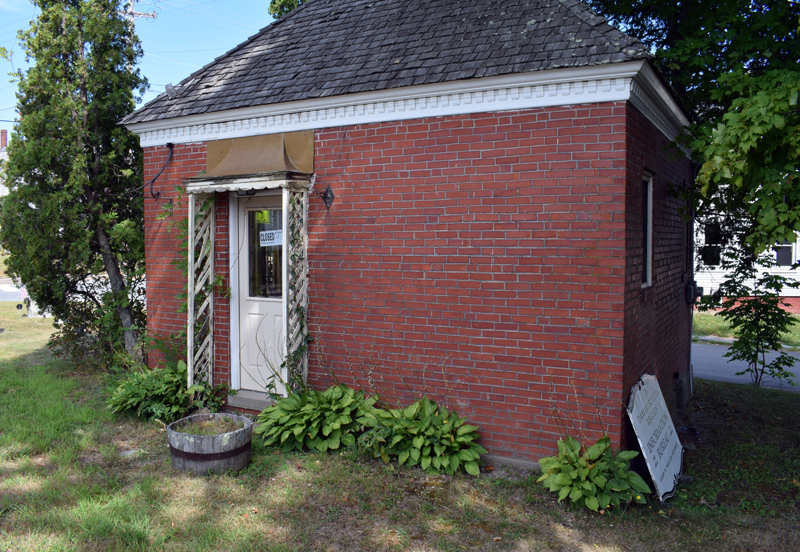 The chamber’s project is part of a merger with the Damariscotta Region Information Bureau. The chamber hopes to open its new headquarters to the public in time for the 2021 tourist season.

“We’re excited about the prospect of having a permanent home. The other thing we’re excited about is being a part of preserving the history of the area,” Damariscotta Region Chamber of Commerce President John Roberts said.

Jim Gallagher, president of Damariscotta Region Information Bureau Inc., will serve on the chamber’s board as a representative of the bureau.

The 17-by-17-foot building in King Square, across Main Street from the Damariscotta Baptist Church, dates to 1935.

In order to house a year-round office and a planned job resource center, it will need insulation and plumbing, as well as upgrades to comply with the Americans with Disabilities Act.

Other changes will include the addition of four parking spaces and a one-way parking lot that would allow vehicles to enter from Main Street and exit onto Vine.

Roberts and representatives of Damariscotta-based Phelps Architects Inc. presented the chamber’s plans to the Damariscotta Planning Board on Monday, Sept. 14.

Roberts said the state is only willing to sell the land to the town of Damariscotta and the chamber will work with the state and town to resolve the ownership issue.

“We’re in the process of trying to figure out what that means right now. But what we’d like to do, if the board’s willing, is work our way through this site plan process and get conditional approval, understanding that if we can’t get the land, then obviously we can’t have a project at all,” Roberts said.

Roberts said the timeline for the project will depend on fundraising. The chamber does not yet have an estimate for how much the renovations will cost. 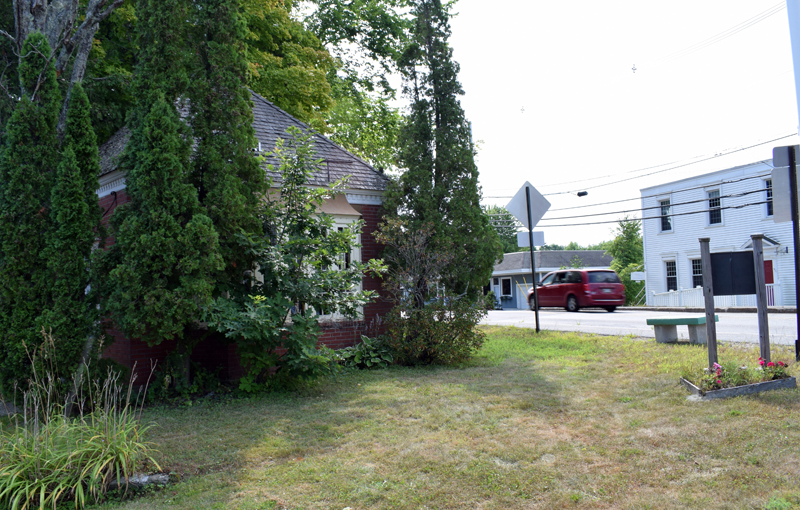 The Damariscotta Region Information Bureau is on a slice of land between Main and Vine streets, a result of the state rerouting Route 1 from Church Street in the 1930s. (Evan Houk photo)

Roberts and Michelle and Dan Phelps, of Phelps Architects, said they plan to preserve the character of the historic building while adding a new wing.

After work on the interior, roof, and windows, the current structure will become the job resource center, Michelle Phelps said by phone Tuesday, Sept. 15. Cabinets will be installed to display historic items and new wiring run for computers.

The new addition to the building is an L-shape and will be 29 feet wide. The longest wing of the building, which will house the conference room, will measure 24 feet.

The property will include a bike rack to promote a more bike-friendly environment in town, Roberts said.

The planning board will conduct a site visit to the property and the chamber’s current headquarters at 4 p.m., Monday, Sept. 21.

The chamber currently leases office space in the former Bank of Maine building at 67 Main St. in Newcastle, where it has been since 2014.

The bureau was formed as a joint venture with the previous incarnation of the chamber, the Damariscotta-Newcastle Board of Trade, according to an announcement of the building’s opening in the June 13, 1935 edition of The Lincoln County News.

Roberts, in his presentation to the planning board, said the board of trade was organized Nov. 13, 1933 at Lincoln County Motors by 27 businessmen from the Twin Villages and became the Damariscotta Region Chamber of Commerce on May 15, 1986.

The mission of the information bureau was “to adequately serve the tourist and Summer guests” by providing “information pertaining to hotels, one-night accommodations, etc.,” according to the article.

A July 4, 1935 LCN article about the building’s opening reported that “regional literature, maps, and folders from different chambers of commerce in the state are on display and a wide variety of literature of interest to travelers is on file.” 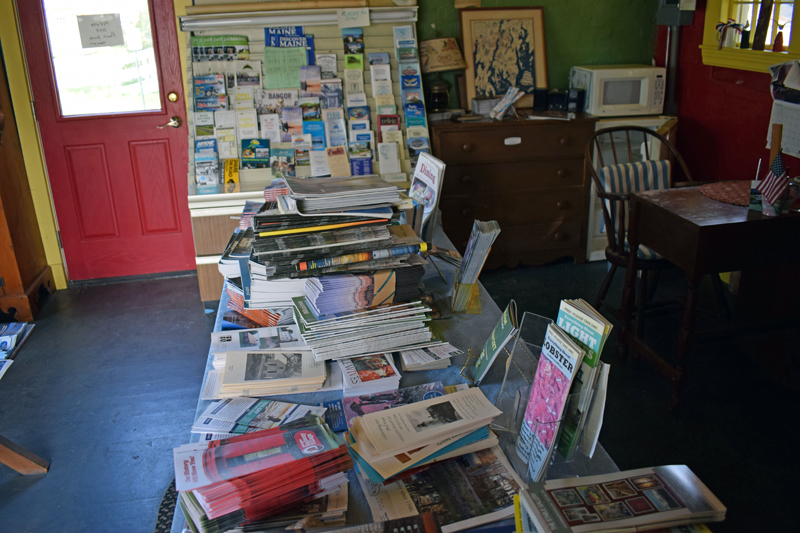 Brochures and other information about the area on a table inside the Damariscotta Region Information Bureau. The building closed in 2018. (Evan Houk photo)

The article highlighted the joint venture by mentioning that “the Damariscotta-Newcastle Board of Trade provided the services of Mrs. E.L. Hanly who is in attendance daily.”

An item in the July 13, 1939 edition of the LCN indicates that the board of trade held meetings at the building as well.

The structure was built on the small parcel known as King Square that fell into the state’s possession after a rerouting of Route 1.

The area was dubbed King Square at Damariscotta’s 1933 town meeting in memory of Dr. J.M. King, who lived on Vine Street.

Grevis Melville had the idea to create the bureau after the state rerouted Route 1 from Church Street, removing a building in the process.

“I lived on Vine Street at the time and I didn’t like the appearance of the empty lot which had been created by the removal of a house to allow for the highway rerouting in 1933-34. We were in the midst of the Depression and there were no state funds for beautification available,” Melville said in an LCN article in the Sept. 26, 1985 edition.

A blurb in the March 9, 1939 edition announcing the spring opening of the building describes the success of the information bureau during its first four seasons in operation. It says the 1938 season saw 4,108 signatures and 10,983 visitors — third most in the state among information centers.

An officer of the Maine Development Commission wrote a letter to Melville commending him on his work.

The bureau then built a larger building that opened in 1960 on Route 1 in Newcastle, across from where Newcastle Chrysler is today. It operated out of both buildings for a period of time.

A June 20, 1985 article in the LCN heralded the 50th season of the Damariscotta Region Information Bureau and the expected arrival of its 1 millionth visitor to travel through either of the buildings.

The write-up said, “in the past several years the bureaus have assisted an average of more than 22,000 visitors each season,” which were roughly equally divided between the two locations. 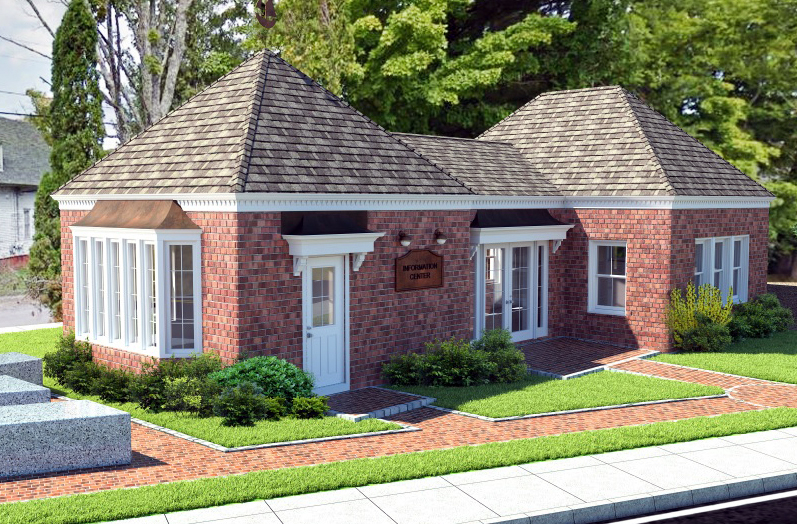 Also in 1985, Gallagher, a Damariscotta attorney, was handed the reins of the bureau by former President John R. Hilton. He continues to run it today, although visitors began to decline sharply around 2004, with the rise of the internet.

Gallagher said in an interview Aug. 14 that a gradual slowdown in traffic and advertising revenue led to the closure of the building in the summer of 2018, when not enough people were visiting to justify paying someone to staff the building.

“Some years we’d have 15,000 people stop here. That dwindled as the internet rose and people were getting information directly from the people we were advertising for,” Gallagher said. “So the need to advertise with us just fell away. It became harder and harder to convince people to donate.”

For most of the bureau’s history, the building was staffed by volunteers and funded through donations and subscriptions from private businesses.

“This was largely a volunteer organization for most of its life,” Gallagher said.

Gallagher gave credit to the volunteers, some of whom worked in his Damariscotta law office, for keeping the bureau funded and staffed over the years.

He mentioned Lyndelle Brackett, Marie Genthner, Charlene Hunter, Linda Mitkus, and Harriet Redonnett as volunteers who would arrange the advertising and coordinate with the Maine Tourism Bureau.

From the 1970s through the mid-1990s, one of the key fundraising components involved volunteers selling advertising to include on a map of businesses on the Midcoast, referred to as “Damariscotta Boxes the Compass.”

“Those donations, for the listings, really supported this place for many, many years,” Gallagher said.

Gallagher said the building still has a telephone line and an answering machine that is monitored. When the bureau couldn’t pay the bill anymore, Tidewater Telecom, of Nobleboro, agreed to absorb what was owed.

“That’s a local, community-based company that recognized the value and said, ‘We understand the situation,’” Gallagher said.

The need to find a way to keep the doors open led to Gallagher initiating talks this year with the chamber of commerce. He said the bureau had been sustained by income from the sale of its Newcastle location since 2005.

“It’s been a wonderful experience to cooperatively work toward doing something that’s in the best interest in the town and the history of this place,” Gallagher said.