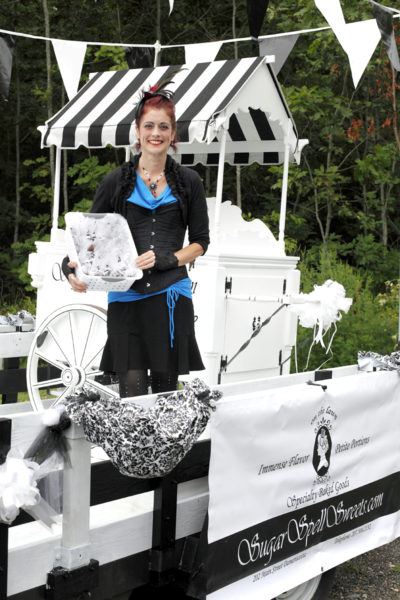 April Morrison, the owner and baker behind SugarSpell Sweets, is expanding the business to include a delivery service. Morrison opened her Victorian-inspired dessert cart at 202 Main St. in downtown Damariscotta in May. (Photo courtesy Leon Vanella Photography)

Three months after opening a dessert cart in downtown Damariscotta, SugarSpell Sweets owner April Morrison is expanding the business to take her sweet treats on the road.

Morrison, the owner and baker behind SugarSpell Sweets, will offer a delivery service for special orders and event catering.

Morrison opened SugarSpell Sweets, a dessert cart featuring homemade baked goods of her own creation, at 202 Main St. in May. In the three months she’s been out on the lawn, Morrison said she has received positive feedback from the community.

“Customers are telling me how much they love the treats they buy and how different and special they are from anything else they’ve experienced,” Morrison said. “I’ve had many people from out of state find my website and Facebook page and make it a point to stop and try my desserts while they are vacationing here.”

Morrison said she has received compliments on the Victorian-style theme of the business. She wears Victorian-inspired outfits while operating her cart, which was custom-made by her brother, Michael Morrison, of Bristol.

With special orders on the rise and with limited parking close to her cart’s location, Morrison decided to expand SugarSpell Sweets to include a delivery service, which will allow her to share her passion for baking with more people.

The delivery service will allow Morrison to cater desserts for a multitude of events, from corporate functions and weddings to anniversary parties and bridal showers. Morrison’s offerings would be customized to fit the client’s needs.

“Depending on what the customer is looking for, I could supply desserts only, or appear in costume with my cart stocked and ready to serve guests,” Morrison said. “There are many more possibilities, and I’m certainly open to requests.”

Morrison will continue to be on the lawn in front of Acasa Hair Salon from 10 a.m. to 3 p.m. on Tuesdays until the weather changes. She also plans to have her cart out for Pumpkinfest and other special events.

For more information or to place an order, contact Morrison at 504-2132 or info@sugarspellsweets.com. SugarSpell Sweets is also on Facebook.