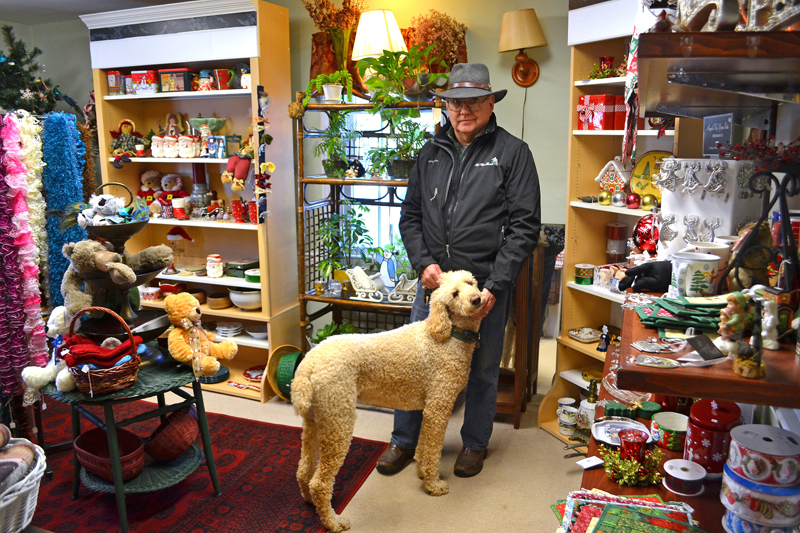 Guy Thompson, owner of First Class Florals and All the Comforts, stands in the middle of the store with his dog, Jessy. The store will close Friday, Jan. 5. (Maia Zewert photo)

The Damariscotta business First Class Florals and All the Comforts will close Friday, Jan. 5.

Owner Guy Thompson is holding a going-out-of-business sale at the shop, which sells antiques, handmade crafts, and other items.

“The economy’s changed and we’re not having orders like we used to. It became clear something had to be done, and this is what we’re doing,” Thompson said.

Monica Yeakel, Thompson’s late wife, started the business on Route 1 in Newcastle. After a fire badly damaged the building in 2013, First Class Florals and All the Comforts moved to its current location at the intersection of Back Meadow Road and Main Street in Damariscotta.

Thompson said the store brought a lot of joy to Yeakel, who passed away April 25, 2017.

“She was always happy when she was in here,” Thompson said. “The customers were her friends.”

In 2013, Thompson joined the shop after a 40-year career at Bath Iron Works. In the beginning, his job was to deliver flowers, which he described as “one of the most enjoyable jobs in the world.”

“People love to see you when you show up with flowers,” Thompson said. “You get to see some of the most beautiful homes, and when you tell people that, it makes them even happier.”

In addition to floral arrangements, antiques, and crafts made by Yeakel, the business sells Christmas ornaments, jewelry, and various other odds and ends.

“There was always something for everyone, even people who didn’t think they needed anything,” Thompson said. 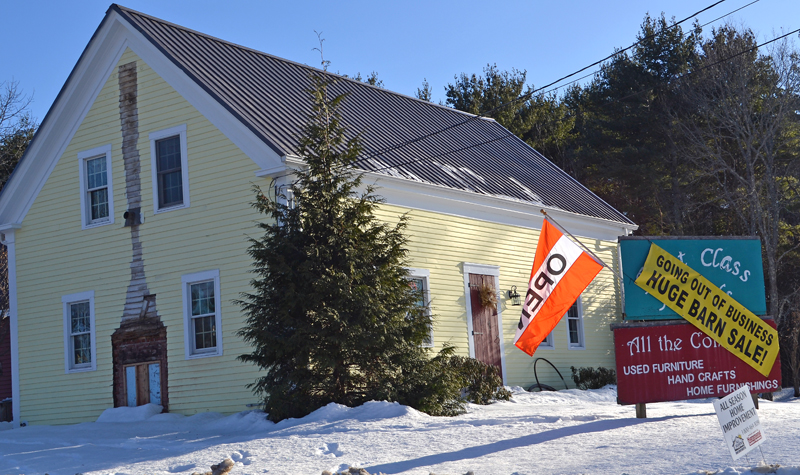 First Class Florals and All the Comforts, at 17 Back Meadow Road in Damariscotta, will close Friday, Jan. 5. (Maia Zewert photo)

After Yeakel passed away, Thompson took over the management of the business. He kept the shop going with assistance from Roy Blomquist, who designed floral arrangements.

However, with sales down, Thompson recently made the decision to close the business.

“From all the people I’ve talked to, there seems to be a decline in the floral business everywhere,” Thompson said. “But we’re just not making what we need to be.”

With the exception of fresh flowers, almost all inventory is available for half-price until the business closes, Thompson said. Display cases and racks are also being sold. He plans to put the building on the market after Jan. 5.

The news of the shop’s closure has met with sadness from customers, many of whom were close friends of Yeakel’s, Thompson said.

“It is a sad time, but it’s gotten to the point where we just can’t keep going on, and I think everyone understands that,” Thompson said.

After the business closes, Thompson said he plans to spend more time with his grandchildren, work in his woodshop, and possibly deliver flowers.

“It’s such a joy, I might seek someone out just to deliver for, but we’ll see how everything goes,” Thompson said.