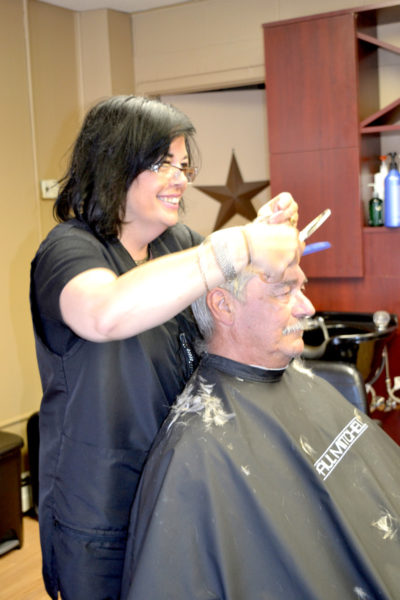 A change has taken place at the busy little hair salon tucked into the Elm Street Plaza shopping center in Damariscotta. Formerly called Shelley’s Shortcuts, after former owner Shelley Collamore, the salon has been renamed Hair … We Are! by its new owner, Ivette Segovia, who bought it from Collamore in late June. Segovia worked at the salon as a stylist for a year and a half before taking ownership of the business.

The salon’s new name is as bubbly and friendly as Segovia herself, as anyone who has had the pleasure of spending time around the former Florida resident knows. That includes the continual flow of customers popping in on any given Saturday to get a haircut.

Saturday, July 30 was no exception. One man was in the salon chair, getting his hair cut, while his wife awaited her turn. Three other men were in line for a cut, and others poked their heads in the door saying they would be back in an hour or so.

“OK, baby!” said Segovia to one of the men, a regular client of hers.

In fact, Segovia seems to have many regular customers, all of them willing to wait their turn for the good-natured attention and conversation – and a relatively inexpensive, skillful haircut – that Segovia provides.

“Whenever anyone needs a haircut, I send them here,” said Gayle Gifford, of Nobleboro, the woman waiting while her husband got his hair cut. Gifford said she and her husband, Gerry, have been coming to the salon for seven or eight years. Segovia, she said, has been cutting her hair “ever since she’s been here. I’ve always been happy with it!”

Joseph Jackson, of Bristol, one of the men waiting for a haircut, agreed. Of Segovia, he enthusiastically said, “Convenience. Entertainment. Always a joy. She knows what she’s doing and she has fun doing it!”

Segovia, who playfully refers to herself as a “one-man team,” also offers waxing services (to both women and men) and she enjoys grooming men’s beards. “I do beards. I love beards!” she said.

“I love it here,” Segovia said, smiling one of her radiant smiles. “You become friends with people. I entertain myself!”