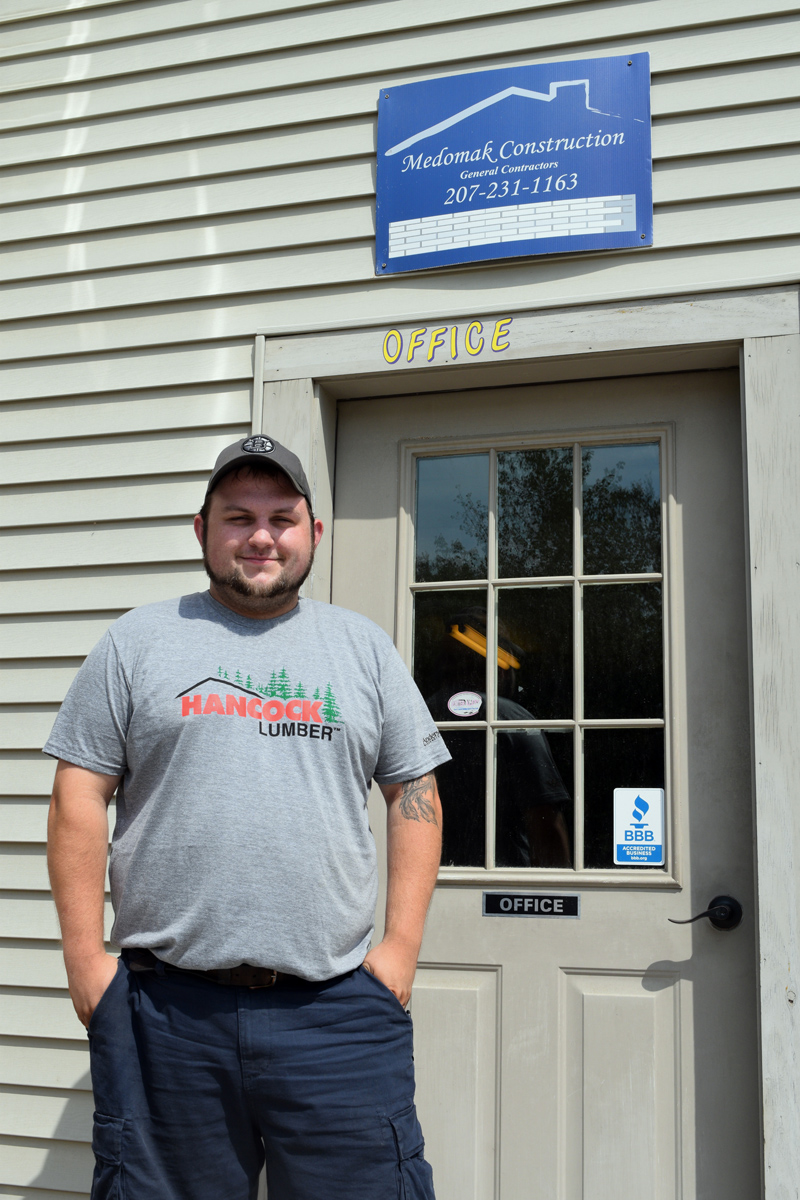 Cameron Creamer, the new owner and operator of Medomak Construction Inc., at the company’s office on Biscay Road in Damariscotta. (Jessica Clifford photo)

According to its website, Charlie Hyson started a small masonry business out of his Jefferson home in 1986. His son, Rob Hyson, took over and expanded the business until Creamer bought it.

“Because Mr. Hyson left and the (Damariscotta) bathroom contract fell through at the same time, the company didn’t just disappear. I’m actively hiring and we’re currently booking into next summer,” Creamer said of buying the company from Rob Hyson, who has since moved out of state.

Medomak Construction and the town of Damariscotta negotiated a contract for the business to build new public restrooms downtown, but Medomak Construction pulled out in April. Creamer, then an employee, told The Lincoln County News at the time that the contractor could not secure the necessary performance bond.

Creamer had worked for Rob Hyson and Medomak Construction since early 2017. He started out as a self-employed carpentry subcontractor, joined the company as a project manager, and was promoted to general manager before the transfer of ownership.

When Creamer learned that his employer was leaving the company, he reviewed his options: to find another job, start his own company, or “take over the operations here and continue the name that I worked for for years,” he said.

Creamer, 26, is a self-taught builder. He started his career in construction in early 2016, making furniture for his family and friends.

“That’s kind of how that took off,” he said. “Every project was a little different, and I liked that. Plus there was a visual satisfaction of the project.”

Creamer feels a similar satisfaction as the owner of a construction company.

“You have the visual satisfaction of seeing a project come out just the way it’s supposed to, and then you have the emotional side of it, where you see clients are happy at the end of it, and that’s just an added bonus for me,” he said.

At one point last summer, Medomak Construction had 22 people working for it, including some subcontractors. Now the business has nine full-time employees.

Some employees left when the previous owner left, while others took new opportunities. No one was fired or laid off.

Creamer is actively looking to hire about two or three new workers and eventually wants to reach a “magic number” of 12-15 employees.

“Rob had a really good base structure for the company, and there’s not a lot fundamentally that we are going to change,” Creamer said.

One of the changes will be extending the time employees have to work on a project.

“Some of the guys need a little bit more time to do aspects of the job than we used to allow. We are giving the guys a lot more time to make sure their details are really executed well,” he said.

He wants to be transparent with design plans for customers.

“If (customers) are on a tight budget and they’re picking finishes that are going to take them way beyond their budget, having those hard discussions before the project is way easier than having (them) later on down the road,” he said.

“I try to get any gray area out of it beforehand. That’s kind of a new thing for us,” he said.

Before the company starts a project, it provides a list of everything going into the house, down to the faucets and light fixtures.

The goal for the business, Creamer said, is to become “the recognized name in the area for custom homes” and bring just about all trades in-house.

In the future, he would like to hire an architect to design all the company’s projects in-house as well.

A showroom is under construction at the company’s office at 74 Biscay Road. The room will soon have new hardwood floors, lighting, and paint. Creamer hopes to have it complete at the end of the fall.

The showroom is a step toward “that end goal where a customer can come in, sit here, go through the design, (and) there will be tons of selections; they can put their hands on the materials,” Creamer said.

The company has expanded its service area and is now doing projects as far afield as Harpswell, Camden, Washington, and Belfast.

Current projects include a renovation on Louds Island, off Bristol, and the construction of a new house in Whitefield.

One of the biggest projects Creamer and Medomak Construction have ahead of them is the expansion of the girls camp on the Chewonki Foundation campus in Wiscasset, which they will start at the end of August.

The project will include five new cabins, a staff house, and a community washhouse.

In addition, Medomak Construction is working on a bathroom remodel for the Elementary School at Chewonki, on the same campus.