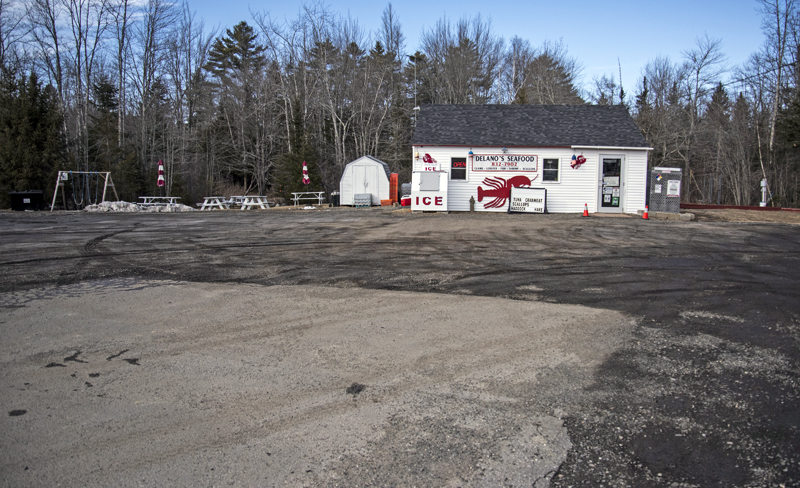 Delano Seafood Market in Waldoboro plans to build an addition onto the left side of the building, toward the picnic tables. The addition will allow the market to expand its retail space, while a new deck at the back of the building will expand seating for the Delano Seafood Shack. (Bisi Cameron Yee photo, LCN file)

The Waldoboro Planning Board approved an application to expand Delano Seafood Market, on Route 1, Wednesday, March 10.

The market plans to build a 40-foot-by-36-foot addition to its retail space and a separate 8-by-40 addition for a walk-in refrigerator and walk-in freezer.

Owner Kendall Delano presented two site plans to the board, one for his preferred layout and a second moving the addition 12 feet forward to avoid a potential floodplain.

Board member Barbara Boardman asked if the addition would be on a wetland area.

Delano said a small brook runs about 100 feet behind the business and “comes up a bit if there is a lot of rain.”

Delano said he plans to have the lot surveyed to ensure the location is 1 foot above the floodplain level in order to avoid additional insurance costs or construction issues.

Scott Simpson, chair of the planning board, said that if the location is within a floodplain, Delano will have to acquire a floodplain permit from the code enforcement officer.

Delano said he is prepared to move ahead with the second site plan if necessary, and hopes to begin construction in the next month.

Delano plans to pave the parking area and add lines to better manage customer traffic between the retail store and the Delano Seafood Shack that shares the lot. Reached by phone after the meeting, he said he wants to add a deck as well to expand the outdoor dining space for seafood shack customers.

The board approved the second site plan with the condition that Delano add a lockbox for emergency services access, as requested by Waldoboro Fire Chief Paul Smeltzer.

The board said that Delano could return to amend the site plan if the survey determines that the preferred location is not in a floodplain or if he decides that he wants to build there, despite the additional costs.

The board approved a request from Greg Collins to use a building at 646 Union Road as a small automotive repair garage. Collins had previously used the 2- to 3-year-old building for storage.

Collins also plans to sell pre-owned vehicles from the lot, pending approval from the code enforcement officer. According to Collins, the lot has space for 10-15 cars.

Collins said he has a car dealer license, so he can sell vehicles abandoned by their owners. He said he would market vehicles on Craigslist and Facebook, and does not plan to sell more than one car a month.

Board member John Kosnow asked if there are any environmental concerns involving containment of fluids, such as oil or gas, or issues of ventilation for employees.

Collins said the building has “a concrete floor with speedy dry and oil-collecting mats” and fluids would be collected in a holding tank.

“I’m all about the environment,” Collins said. “I protect it dearly. Plus I want all the oil I can get in the barrel — it heats my garage.”

Collins said he will be the only employee and will open the door if he needs more ventilation.

Collins is seeking a permit from the Maine Department of Transportation addressing the entry into the business. The board said that Collins would need to add a lockbox for emergency services access as requested by the Waldoboro fire chief.

The board granted final approval for a change of use for the former Progressive Grange, at 931 Winslows Mills Road, that will allow a dance studio to open on the second floor. If the building owners later make use of the first floor, they will need to return to the board to address parking and access for emergency services.