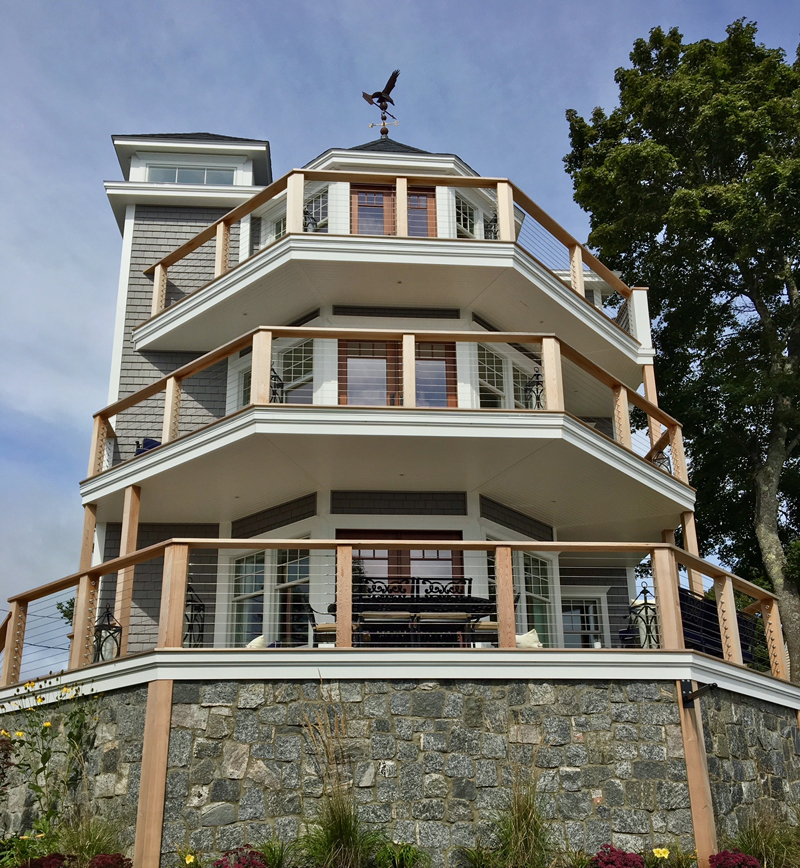 There are two new options for a luxurious stay in Boothbay Harbor.

One of the properties, at 101 Commercial St., has been converted from a three-story home into a high-end rental. Now called Harbor Island View due to its expansive view of Harbor Island, it’s a study in comfort and luxury.

Reconstruction and renovation began in September 2017. Though the size and shape of the original house remain intact, it was in need of a complete rebuild.

“We used the old structure, though we got right down to the timbers, and then some,” Coulombe said. “Dormers and balconies were increased some, but the footprint was tight.”

Built in the 1800s, the building swayed in the wind and was insulated with horsehair. “The 2-by-4’s were actually 1-by-2’s. You could break them with your hands,” Coulombe said. “The building was virtually falling down when we gutted it.”

“We really built it from the ground up. The building is actually brand new, and it’s solid.”

The now structurally sound building features an elevator to transport guests, and their luggage, up to the second and third floors.

Boothbay Harbor Country Club Public and Member Relations Director Michelle Amero said Bertin has expanded his year-round employment as a result of those projects, from four to 20 year-round employees.

Neel is responsible for most of the design, decor, and amenities at 101 Commercial St. and the second new rental, On the Harbor House, at 63 Townsend Ave., according to Armstrong. “Melissa drove the bus for these projects,” he said. “Chris and I basically just supported her.”

Neel was modest about her role, saying the projects were collaborative efforts on the parts of Armstrong, Bertin, Coulombe, and herself.

“Paul has great taste,” she said. “Working for him for as long as I have, I have a feel for what he likes, and we tried to model it after what he would do. It was a learning experience for all of us, and we all worked together.”

There are two bedrooms on the second floor, another on the top floor, 3 1/2 bathrooms, and a washer and dryer. A large common deck on the first floor and private balconies on the top two floors afford bird’s-eye views of the harbor and beyond.

Coulombe said he decided to purchase the property not only for the view, but for sentimental reasons too.

“I’ve been driving by this building, like everyone else in town, forever, and I always loved the original architecture, so I wanted to maintain that,” he said. “I thought it was always a cool spot, and I was shocked that no one bought it.”

Now he has put $1.7 million into it, including the acquisition cost. “It will eventually pay itself off, though probably not in my lifetime, but the views are tremendous,” he said with a laugh.

On the Harbor House, in the former Pottle Realty building, offers a pair of two-bedroom units, available separately or together. As upscale and luxurious as Harbor Island View, each unit includes private baths and full kitchens, a washer and dryer, and private balconies.

The bottom floor features an open-concept poolside bar, complete with a hot tub, that overlooks the inner harbor and the iconic footbridge.

Both rentals will be available at reduced rates during Gardens Aglow at Coastal Maine Botanical Gardens. From Nov. 15 until Dec. 31, the cost for Harbor Island View will be $500 per night, with a $250 cleaning fee; and the cost for each unit at On the Harbor House will be $350, with a $150 cleaning fee.

In other developments, Coulombe said a property he acquired at 63 Atlantic Ave., home to Cap’n Fish’s Waterfront Inn and Cod’s Head Fish House & BBQ, will remain a hotel and restaurant.

More specific plans depend on what the town decides regarding zoning on the East Side of the harbor, the focus of an ongoing planning process.

“It all depends on what passes,” Coulombe said. “It’s hard for me to design something not knowing what the parameters will be.”

Many regulations need to be decided first, including height restrictions. “It’s really complicated,” he said. “We have to go through some very sophisticated, complicated permitting processes.”

More than a half-dozen architects, engineers, representatives of the Federal Emergency Management Agency and Maine Department of Environmental Protection, and others have become involved, he said.

Amero said an early step will be to identify the property’s needs and address deferred maintenance.

“My intent is not to change the character of the town, but to save it,” Coulombe said.