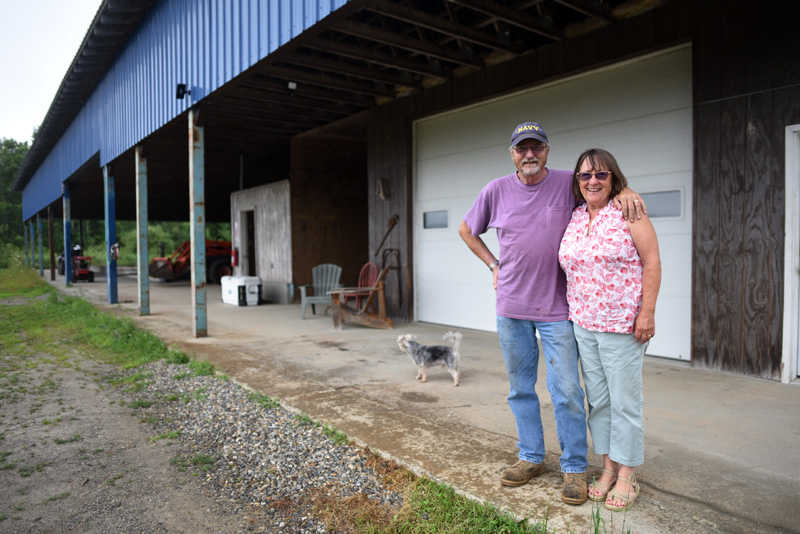 Jeff and Linda Biden stand in front of their former cattle barn, which they plan to use for automobile storage, Monday, July 23. (Jessica Picard photo)

After 11 years of raising cattle for beef, Jeff and Linda Biden, of Eastern River Cattle Co., recently got out of the cattle business. However, the barn that previously housed the company’s herd will now have a new purpose: storing automobiles.

“Farmers markets were kind of our social life,” Linda said. Eastern River Cattle Co. would bring its beef to markets in Brunswick, and had many regular customers.

“They all became our family, our customers as well as the other vendors,” Linda said.

Eastern River Cattle Co. received the Producer of the Year award from the Maine Beef Producers Association in 2016.

Jeff said the couple’s two children already have careers and were not interested in taking over the business.

“The farm was going to end up being shut down sooner or later, so we picked a good time for us and went for it,” he said. The company ceased operations in May, and sold 32 acres of the property a year ago.

The Bidens have owned Eastern River Self Storage for the past year and a half. The business offers climate-controlled storage at 438 Middle Road, right down the road from their home and barn at 29 Hunter Road.

Jeff, who grew up on a cattle farm in the Franklin County town of Carthage, said he will miss the cows, but turning the barn into vehicle storage was a natural progression, since they already have the other storage units.

“Some of (the barn) I use for my own personal workshop, but the remaining space just would have been worthless, so it makes sense to spend a little bit of money to get into the auto storage business,” he said.

The Bidens have put six shipping containers next to the barn, which are already available for rent as storage units.

Before the barn can be used for vehicles, a fourth wall needs to be added.

“It was a three-sided barn. In this day and age, you want free airflow over the animals. It was basically a shelter,” Jeff said.

The Bidens plan to have the barn ready for vehicles by October.

The barn will be able to fit around 75 vehicles, Jeff said.

The Bidens will charge $399 per vehicle and $249 per motorcycle for the season, which will run from around November to April.

“We’ll be ready for them whenever they want to bring them,” Linda said.

The Bidens said they are grateful to “Big Al” Cohen for his advice on the business. Cohen owns a storage facility in Boothbay, along with Big Al’s Super Values in Wiscasset.