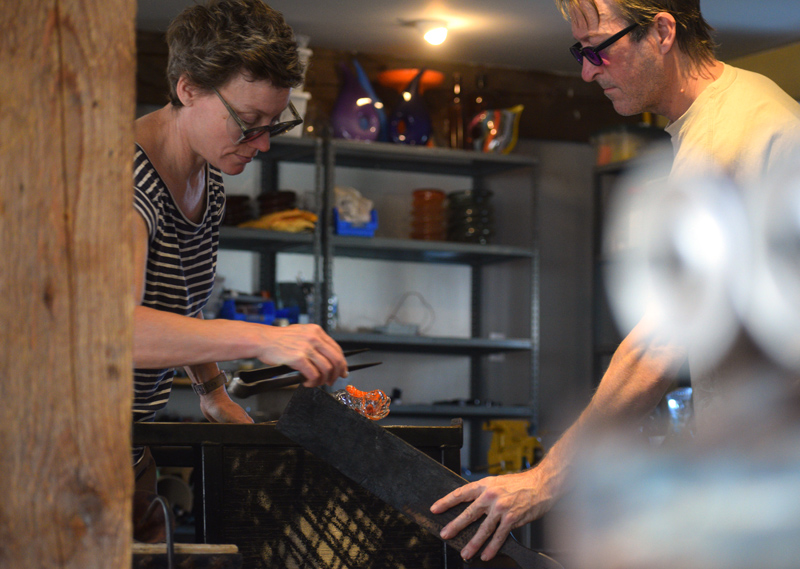 A peek at Terrill Waldman and Charlie Jenkins as they focus intensely while working in their studio, Tandem Glass, in Dresden. (Jessica Clifford photo)

Inside the glass studio in a Dresden salt box barn off of Route 197 is a little world of its own, with the couple running the show simultaneously meticulous and creative in their movements.

The artists and owners of Tandem Glass, Charlie Jenkins and Terrill Waldman, gained this skill of working in unison from blowing glass together for a long time.

“What we do is completely choreographed and dance-like,” Jenkins says. “A lot of it comes from the practice of staying out of the way while one person is making something.”

By their rehearsed movements, one would never think they have worked separately prior to opening their dual studio and gallery in Dresden in 2007.

Waldman says she became “addicted” in 1986 to glassblowing while she was 16 years old and taking a weekend class at a local arts college and working with a nearby artist. Jenkins found his love for the craft in 1989 at college.

Jenkins received a BFA from Franklin Pierce University in New Hampshire. Afterward, he gained his education through working with other glass artists.

Although the two went to college in the Northeast, they met on the West Coast.

Within five days of each other, Waldman and Jenkins separately moved to Oakland, Calif. to work for glass artists and they met shortly afterward.

According to the couple, the San Francisco Bay Area, where Oakland is located, has a large population of glass makers and glass artists, unlike Maine.

“He wandered into a studio I was working at, and we kept bumping into each other at different studios,” Waldman says of how the two met. They began blowing glass together in 1998, but owned separate businesses in California.

The couple decided to be closer to family and planned on moving to the New England area. They chose Dresden because of the building on their current property, which gave them the space to have a large studio and showroom. The pair formed Tandem Glass when they moved to Maine.

Although Tandem Glass still relies on wholesale transactions to galleries and craft stores in New England, the bulk of their products are sold on-site. “While people drop in on a whim, the majority are visitors who have collected our work for some time,” Waldman says.

One of the biggest changes for the artists since moving to the opposite side of the country from the West Coast is the pair does not do as much commission work like they previously did in California.

The name of the business came about because “it’s both of us that power this bicycle,” Jenkins says, referring to the word ”tandem” in the business’ name.

According to Waldman, the business name represents their pasts as individual artists with their own clients, to now working side by side.

In the couple’s Dresden studio, they become mesmerizing to watch, as they work together instinctively in rehearsed movements to finish every piece.

Waldman and Jenkins each have their own creative designs and the designer of the glassware takes the lead on his or her project, while the other assists.

Waldman’s design approach focuses on creating color in her products, and she loves pattern work and simple forms. Jenkins pays close attention to the aesthetic and the colors of the design, while focusing on the ergonomics of an item’s structure.

Although they have different creative minds, they both strive for functional and beautiful glassware.

However, the couple creatively collaborates on one line together – the mosaic collection – featuring various colors, shapes, and indentations in the glassware.

During a recent visit to their studio, the pair showed the writer of this story how they make a cup with a handle, from their mosaic collection.

Creating a cup in the collection is not a one-day project, the artists say. The couple makes the murrini, or the colorful glass elements in different shapes and patterns, prior to forming the cup.

On the day the couple decides to make the cup, they produce around 30 of them.

“After we have gathered clear glass from our furnace on the end of a pipe and start a small bubble, we pick up these murrini as well as other decorations like shards, a thin layer of color, or stringers, threads of glass,” Waldman says.

The murrini are “cold” – at 1,000 degrees Fahrenheit — when they directly pick them up with the bubble. At this temperature, the murrini can be moved around using a large tweezer-like tool.

“This part is fun, because we can manipulate the design and composition of all the elements,” Waldman says.

Either Waldman or Jenkins will fire-polish the spot where the pipe breaks away from the cup. This part of the glass is known as the “punty mark,” named after the punty, or the rod used to place the glass into the furnace. The punty can leave a sharp piece of glass at the bottom of a cup, which melts and smoothes out when using the torch over it.

According to Waldman, the punty mark is the “signature” that a glass item was hand-blown.

After the pair finishes blowing a piece, it is placed in a kiln for it to slowly come down to room temperature. They use Kevlar gloves, a tray, and a slender fork to safely move the pieces.

Once the glass is cooled, a beverage can be enjoyed.

The Tandem Glass glassblowing studio, at 6 Eagle Lodge Lane in Dresden, is open for anyone to see their work in action, the pair says; just give them a ring at 737-2781 to find out when they are blowing glass. For more information, visit tandemglass.com.