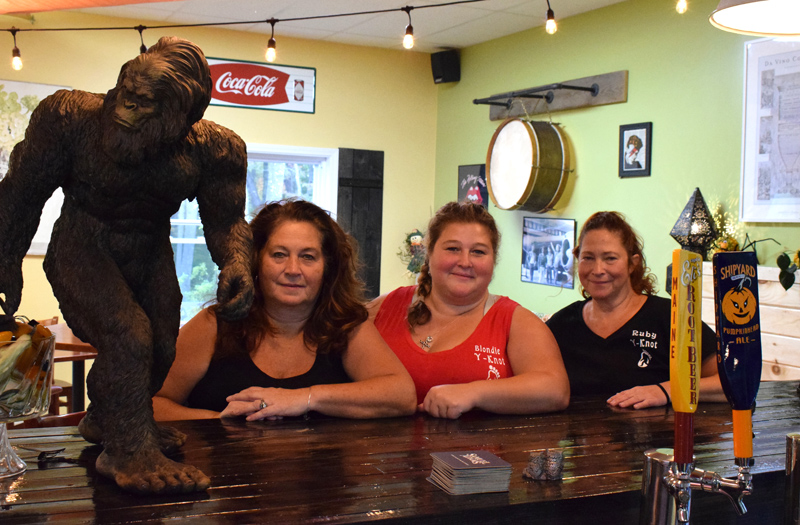 Follow the signs for Bigfoot to the Y-Knot Underground, the new eatery at 590 Main St. in Damariscotta.

Y-Knot is in the basement of the building that houses Damariscotta Eyecare and Neighborhood Clay, with an entrance in the back. Just look for the wooden cutout of the Sasquatch himself, Y-Knot’s mascot, next to the sign off upper Main Street.

Bigfoot is seen everywhere in the shiny but homey space and his large footprints are painted on the floor throughout, creating an aura of mystery, intrigue, and fun.

The Bigfoot idea came from co-owner Mindy Jones’ father, Rick Heaberlin, who built a step stool for Y-Knot’s previous location in a food trailer on Route 1 in Newcastle.

Rick Heaberlin and Mindy Jones’ son came up with the idea to create the step-up with two big feet on it. The Bigfoot idea just snowballed from there.

“We said, ‘Wouldn’t it be cool to say, ‘Bigfoot eats here?’ … It lightens the mood. … It’s fun, like a mystical creature that no one has seen in quite a long time,” Mindy Jones said.

Y-Knot, which specializes in homemade gourmet sandwiches, opened Sunday, Oct. 6 in its newly renovated and more permanent location in Damariscotta.

Mother and daughter co-owners Carol Heaberlin and Mindy Jones had operated Y-Knot out of a trailer next to the Sherman Marsh rest area on Route 1 in Newcastle for the 2017 and 2018 seasons.

This year, Elayne Trotta, Carol Heaberlin’s sister, moved to Maine from Florida to join the pair in their expanding venture.

Mindy Jones said the entire interior of the new space was built from scratch and customized to precisely what the trio of owners envisioned.

“The layout and the design, and the building out of the walls, were all done by us,” she said.

Rick Heaberlin and Mindy Jones’ husband, Mike Jones, built the interior from a blank slate of white drywall. Meanwhile, Mindy Jones, with her mother and aunt, masterminded the design and layout of the space and painted.

In addition to the Bigfoot prints, the names of Y-Knot’s sandwiches spark some intrigue, including trucker’s knot, seahorse, farmer’s knot, and, of course, the Bigfoot knot.

The seahorse is made with tuna, sprouts, avocado, and Swiss cheese, while the farmer’s knot is a chicken salad sandwich with bacon, provolone, and Y-Knot’s red relish.

The Bigfoot smash is a potato bomb filled with bacon and cheese, similar to a twice-baked potato.

The business’s curious name comes from Carol Heaberlin’s mother, who, whenever she was asked to go out to eat, would reply, “Why not?”

Y-Knot also has several recipes inspired by Grandma Young, like the honey kielbasa, the barbecue beef and chicken, and the red sauce used in the spaghetti-and-meatballs and lasagna.

“A lot of our recipes pay homage to my grandmother,” Mindy Jones said.

Y-Knot Underground will also offer breakfast sandwiches, homemade pastries, and gourmet coffee with optional flavorings. It is serving beer on tap and wine.

Y-Knot Underground plans to be open year-round, with the possibility of a few week-long breaks during the winter.