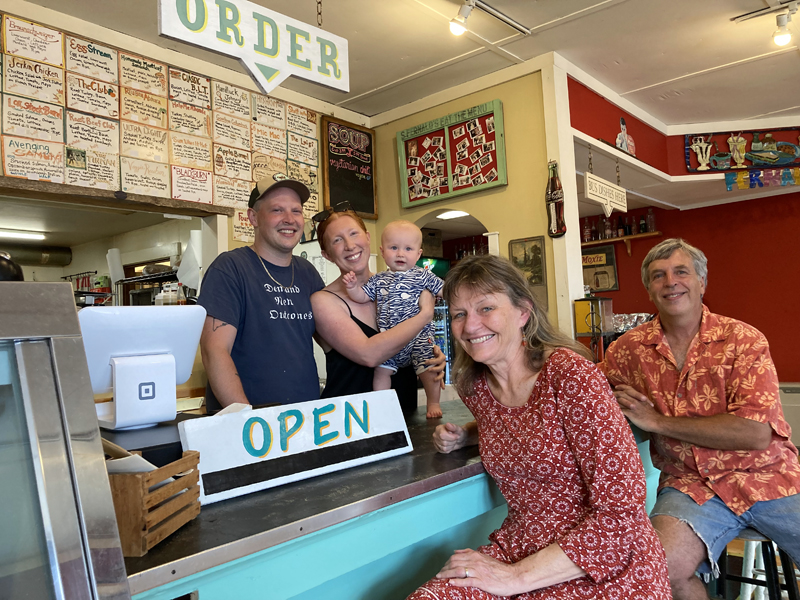 For the first time in the S. Fernald’s Country Store’s 30-plus year history, the business will soon be owned by someone outside of the Richards family.

Owners Sumner Fernald “Ricky” Richards IV and Moira Rose “Rosie” Richards have made the decision to sell the business. The listing went live on Wednesday, July 27.

“This truly was not the easiest choice … there’s been waves of emotion about it,” Ricky said.

Named for Ricky’s great-grandfather, S. Fernald’s Country Store has been around for almost as long as Ricky has been alive. His parents, Sumner Fernald Richards III and Pam Jackman, opened the store next to Renys on Main Street in June 1990 just before his third birthday. The family moved the store to Waldoboro in 1999 before reopening at its current location of 50 Main St. in Damariscotta in 2009.

A lot of family memories have been made in the store. Ricky recalled sitting behind the counter talking to regulars and riding around the floor on a push broom. Both he and his brother, Josh, worked at the store during the summers.

“This place raised you,” Rosie said to Ricky during an interview at the store on July 18. “This town raised you.”

Ricky and Rosie met while working in disaster relief in New York after Hurricane Sandy. When Sumner reached out to Ricky about taking over Fernald’s in 2014, he decided to return to his stomping grounds with Rosie.

“We were kind of discussing what was next when (Sumner) reached out,” Ricky said. “It was kismet.” 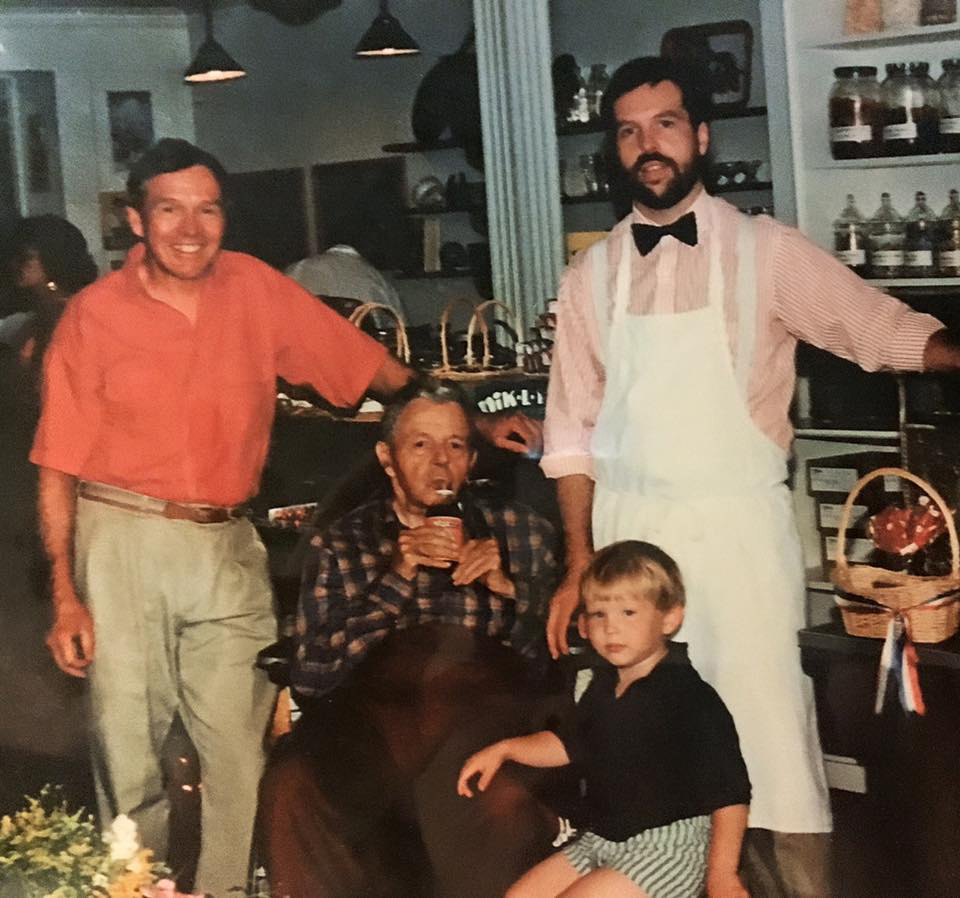 With Pam staying on to run the front of the house, Ricky and Rosie officially took over the business from Sumner during the summer of 2016 while they were still dating. Over the past six years, they became engaged, married, bought a house, and in November, welcomed their first child, Sumner Fernald “Sunny” Richards V.

In addition to personal milestones, Ricky and Rosie’s tenure included helming the store through the COVID-19 pandemic, which involved closing down indoor dining and transitioning to solely window service.

Fernald’s has reinstated almost all of its pre-pandemic offerings. Breakfast returned to the menu last weekend, and indoor dining returned in the beginning of July, the latter of which provided great relief to the couple.

“This place for us and so many people is truly a community space,” Ricky said. “We lost a lot of that in COVID, but it seems to be coming back.” 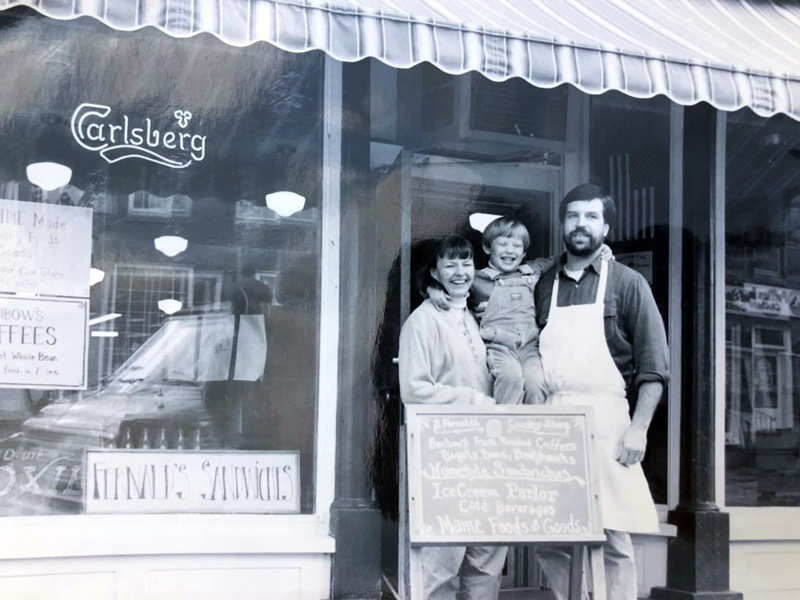 However, Ricky and Rosie have not expanded Fernald’s to its pre-pandemic hours, partially due to raising their son and other life commitments. Since Sunny’s birth, Rosie has stayed home with him during the day while Ricky has been at the shop.

“I essentially kiss him on the forehead in the morning before going to work and then see him at the end of the day before he goes to bed,” Ricky said. “I don’t want to do that for all of his life, but there’s always more to do here. I want to do more here, but I also want to be there for him.”

After informing their family and the staff of the decision, Ricky and Rosie decided to go public about the sale to give their longtime customers time to say goodbye. 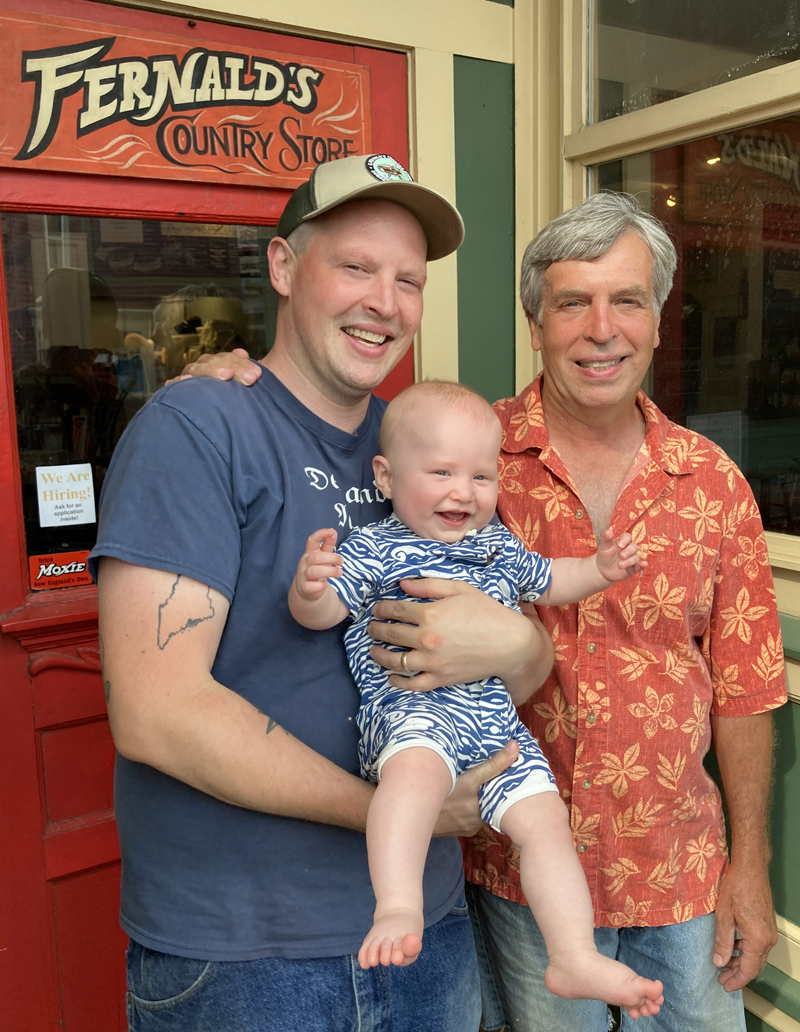 Three generations of the Richards family stand in the doorway of S. Fernald’s Country Store in Damariscotta. Sumner Fernald Richards III (right) started the store in 1990. His son Sumner Fernald Ricky Richards IV (left) took over the business in 2016 and now has a son of his own, Sumner Fernald “Sunny” Richards V. (Maia Zewert photo)

“It’s crazy for how long Fernald’s has been a part of some people’s lives,” Rosie said. “There are summer people who come in and are just in awe that the displays are the same or that there’s still the same candy they remember getting here when they were kids. It’s a staple.”

Year-round regulars also hold a special place in their hearts, with some referring to the store as a “dry Cheers,” Ricky said.

“There are the people we see weekly or even daily … that’s going to be the most difficult, not seeing them regularly and chatting behind the counter,” Ricky said. “We’ve really built these close relationships, not just with people here but also the businesses on Main Street and in the region.”

The sale will include the business and all equipment, inventory, and décor, although Ricky admitted to saving a few pieces of family memorabilia, including a fire bucket with the Fernald’s name. Sumner owns the building and plans to keep it in the family, Ricky said.

While this will likely be the family’s final summer of ownership, Ricky and Rosie are not in a rush to sell. Rather, they’d like to wait for the right person who understands what Fernald’s means to the community.

“I would love to see someone who has a lot of energy and heart,” Ricky said. “The biggest thing is finding someone who wants to give it the same level of care, to have it continue to be a community space.”

Ricky and Rosie will remain in the area after the sale, with Ricky joking that they are accepting offers for the business and future employment.

“We’re so thankful we got to create ourselves together here,” Ricky said. “I don’t know where we would be without it, and I wouldn’t change a thing.”

The listing is through Farrin Properties, of Damariscotta. To inquire about the listing, call Jeff Hurd at 832-1522 or email jeffhurdrealtor@gmail.com

For more information about S. Fernald’s Country Store, go to sfernalds.com or find the store on Facebook and Instagram.