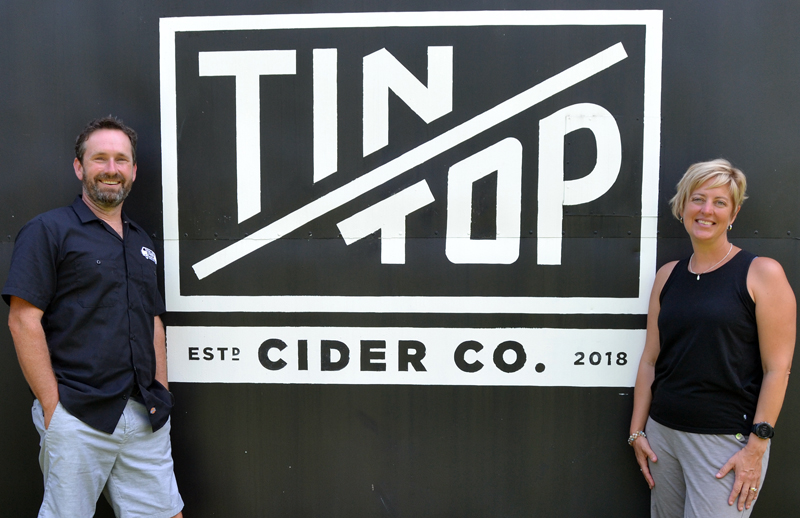 Jon and Jenny Villeneuve stand in front of the Tin Top Cider Co. sign at their property in Alna. The couple will open the business on Friday, Sept. 3. (Maia Zewert photo)

Jon and Jenny Villeneuve will officially open Tin Top Cider Co. on South Old Sheepscot Road in Alna on Friday, Sept. 3, after years of preparation, a change in the town’s law, and a nearly lifelong hobby of making cider.

Jon traces the family tradition back to his grandfather, who would make hard cider in two rum barrels at his home in Bedford, N.H. It wasn’t until his father took on the craft that Jon was able to taste some of the hard cider, which made an impression on the college student.

“I then tried to make to my own hard cider in the dorm room, and that didn’t go so well,” Jon said with a laugh.

After college graduation, pressing apples and making cider became a staple at fall parties. A few years ago, Jon began itching to bring the hobby to the next level. However, to even consider opening a hard cider bar in Alna, the town’s liquor rules needed to be amended to allow for on-premise consumption. 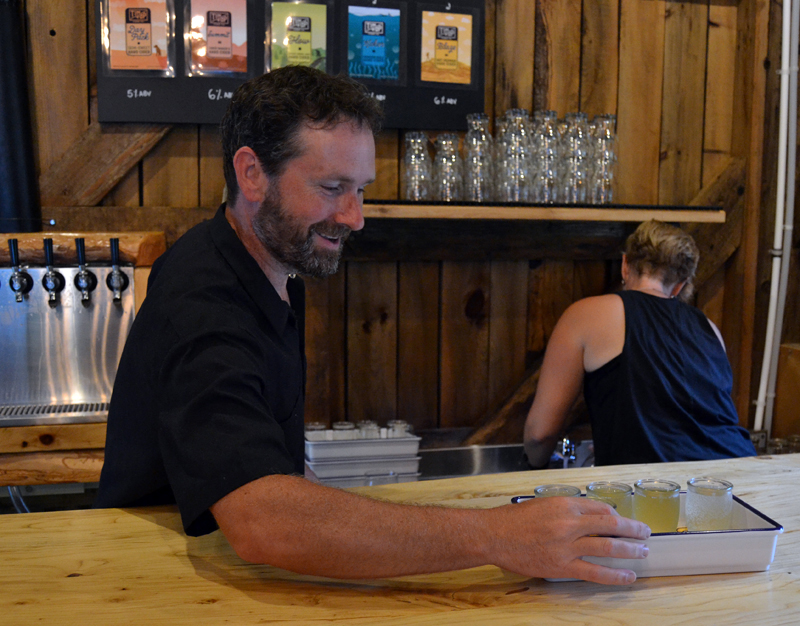 In 2018, Jon and Alna General Store co-owner Ken Solorzano brought a petition to the annual town meeting to change the town’s rules for alcohol sales. Voters passed the amendments to authorize the state to issue licenses for the sale of liquor to be consumed on the premises of licensed establishments by large margins, which allowed Jon and Jenny to consider putting the hard cider company on their own property.

“Being on our property is great for two reasons,” Jon said. “It’s gorgeous and secluded, for one, but since we’re both still working our day jobs, it’s easy for me to come out here and transfer tanks or kegs and then be able to run in to be with the kids and Jenny.”

“It really makes it family friendly to have it close to home,” Jenny added. The couple has two daughters, Ella and Nora.

The teenagers are too young to assist with making hard cider, however, they have been incredibly helpful with landscaping and offering opinions about social media strategies, Jenny said.

Since the town’s rule change, the Villeneuves navigated state and federal regulatory permits and other necessities for the business, including coming up with a name.

After cycling through a few options, they decided on Tin Top Cider, which pays tribute to the family’s 1991 VW Vanagon Hardtop Weekender.

The model is sometimes referred to as a “tin top,” Jon said, and the family used it for adventures. 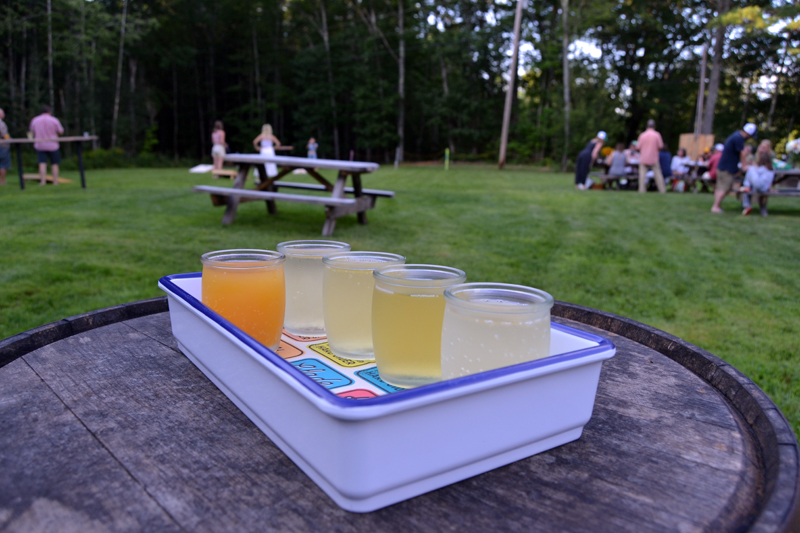 Tin Top Cider Co. in Alna offers flights of its current offerings. The whiskey barrel, now repurposed as a table for the outdoor seating area, is used in the fermentation process of Flow, one of the ciders now on tap. (Maia Zewert photo)

The process of making the hard cider is pretty straightforward. Tin Top Cider ferments apple cider from Ricker Hill Orchards in Turner. The cider is made using a blend of dessert apple varieties, including Cortland, McIntosh, and Honeycrisp. 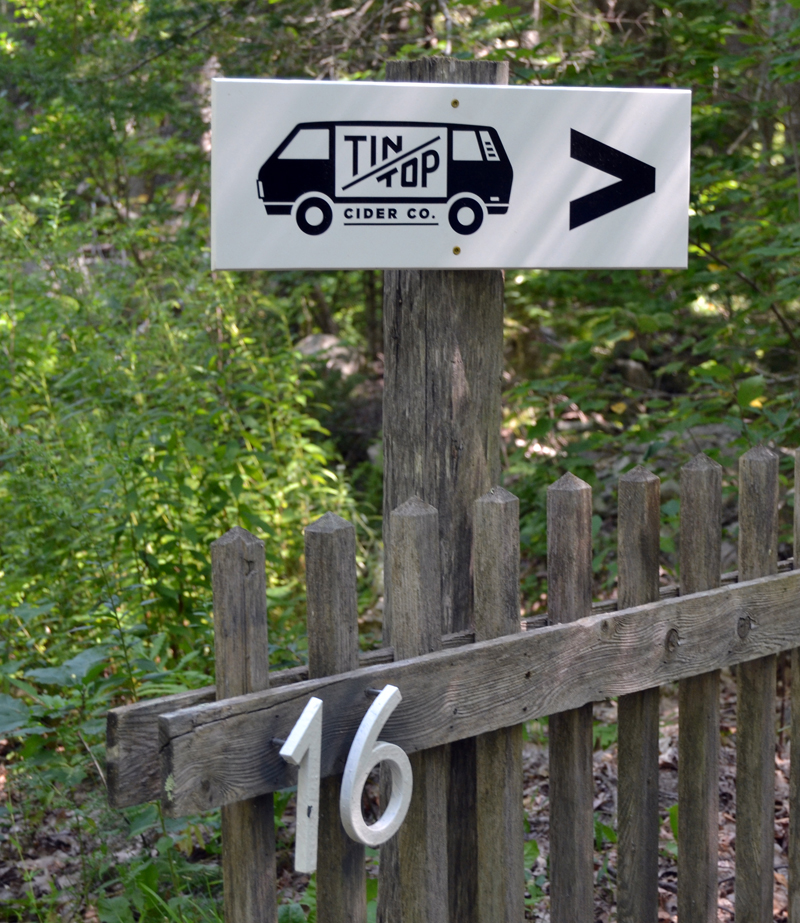 “Cider lends itself to creativity and experimentation,” Jon said. “The apple mix is always different, so it’s not always going to be the exact same thing. You can experiment and have fun with it.”

Most of the ciders at Tin Top Cider go into stainless steel tanks where yeast is added and the cider can ferment.

Day Pack, Tin Top’s sweetest cider, is pulled about three weeks into the fermenting process so that it still has some residual sweetness, while Summit ferments until it stops to create a clean and crisp cider, Jon said.

For Tin Top Cider’s Blaze, jalapenos are added to the process for a set amount of hours to add a playful bite to the cider. Kicker is Moscow Mule-inspired ginger cider.

Flow, the final cider available on for Tin Top Cider’s opening weekend, follows a slightly different process. Instead of using the stainless steel tanks, the fresh cider is poured into used whiskey barrels from the Jack Daniel’s Distillery.

A couple other ciders are in development, including a dry-hopped cider, and Jon said he looks forward to experimenting with fresh cider made from heirloom apple varieties in the fall.

“Depending on sales and people’s palates, we have eight taps to play with,” he said.

During months of development, many of the couple’s friends served as taste testers.

“The feedback we’ve received has been interesting, because a lot of our friends are pretty serious beer drinkers, and sometimes people come to cider with some skepticism because they associate it with a very sugary product,” Jenny said.

“But cider doesn’t have to be any particular way at all. If you like dry wines or a really complex beer or IPA, this could be something you really like,” she added. 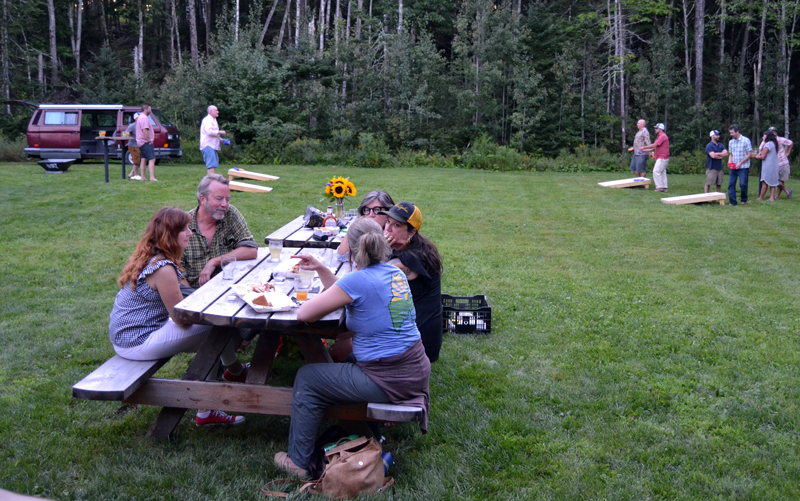 At present, the only place to get Tin Top Cider is at the tasting room at 16 South Old Sheepscot Road in Alna. The tasting room has plenty of outdoor seating, fire pits, and yard games such as bocce and cornhole. The atmosphere is family friendly, and visitors are encouraged to bring snacks or meals, Jenny said.

The cider bar is conveniently located just off the East Coast Greenway, a 3,000-mile biking and walking route that stretches from Maine to Florida. One of Tin Top Cider Co.’s brand priorities is promoting keeping people active outdoors, and a corporate responsibility plan is in the works, Jenny said.

Tin Top Cider Co. is also a member of the Maine Winery Guild and is a part of the Maine Wine Trail. Both Jon and Jenny spoke highly of the inclusivity and the community they have found within the state’s brewing and distilling industries.

Visitors mill about at the soft opening for Tin Top Cider Co. in Alna on Aug. 14. (Maia Zewert photo)

“It’s no surprise, but every time we’ve reached out to someone or partnered with someone, everyone has been so generous, kind, and willing to help,” Jenny said.