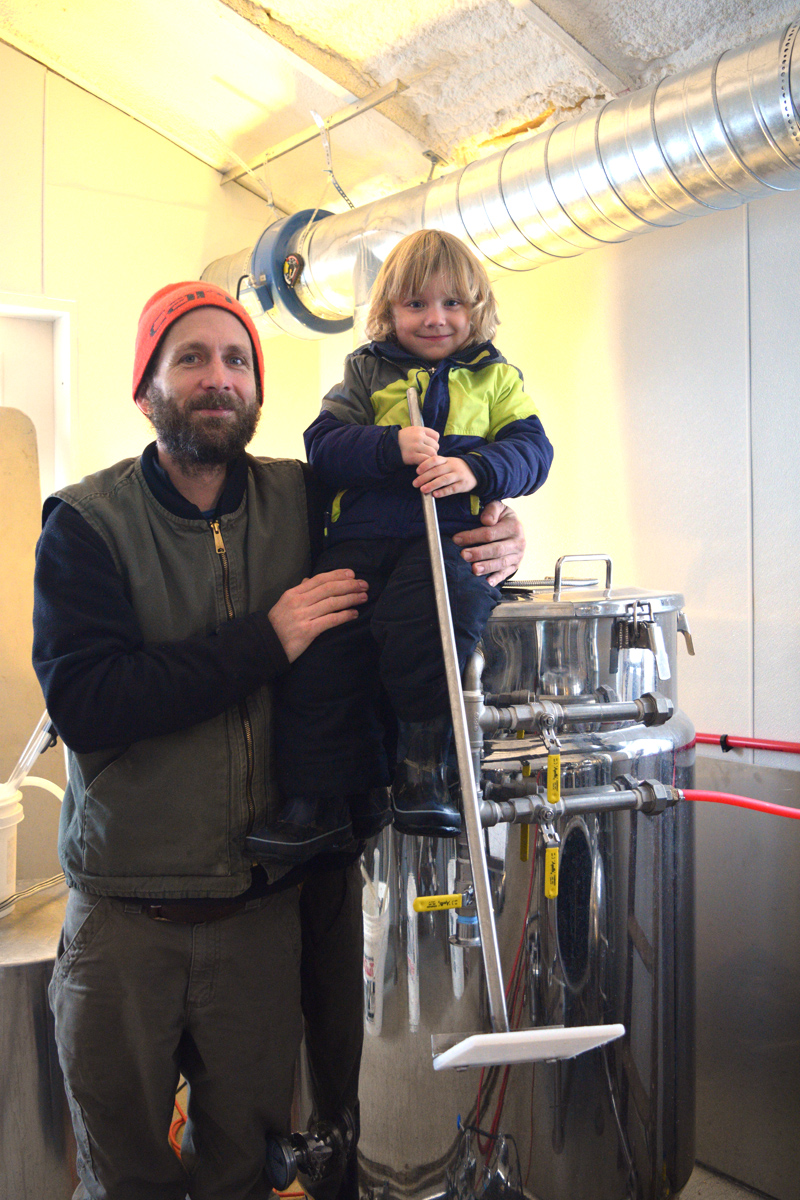 Tarbox Farm in Westport Island has expanded to include Sasanoa Brewing, an organic brewery that uses Maine farm-grown ingredients.

“We’ve been building that business for the past 15 years and now it’s kind of come full circle,” said Kyle DePietro, co-owner of the brewery with his wife, Angela Trombley. “I always loved brewing beer and have wanted to open up a brewery for a long time on the farm — and it came to fruition.”

The two Westport Islanders received both federal and state approval before becoming a legal brewery. DePietro said the process took a while, but they were legal by late September. The brewery owners brewed their first batch of beer in early October.

The brewery is on Tarbox Farm, property that DePietro and Trombley lease from Jeff Tarbox, who is also an investor in the brewery.

A brewery system is measured in barrels, DePietro said. Sasanoa has a two-barrel system that produces 70-75 gallons of beer at a time. Brewing a single batch of beer — about 250-300 bottles’ worth of beer, after some loss during the brewing process — takes about two months.

According to DePietro, Sasanoa Brewing is one of a select few certified-organic breweries in the United States.

Sasanoa Brewing currently offers three beers, including Vol. 1, a regular Maine-grain saison, and two as-yet-unnamed beers, a ginger-lime-basil beer and a farm-hop saison. A saison is pale ale that is highly carbonated, with a fruity and spicy taste.

“Typically, a saison was brewed on a farm with ingredients that were available to the farmers,” DePietro said. “We’re kind of falling in line with that, working with what we have available locally.”

Some Maine products DePietro and Trombley use are grown a little closer to home — at Tarbox Farm itself. Some of these items include ginger, basil, and hops.

All the beers are Belgian-style, which means they use Belgian yeast, DePietro said. The yeast provides a floral and spicy taste. He added that all the beers are fairly dry, not very sweet, and they have a light taste.

He and Trombley recently taste-tested Vol. 1 at the Bath Farmers Market.

“We’re calling it Vol. 1 because we’re probably going to have a lot of incarnations of this beer, based on the ingredients and what we can source,” said DePietro.

As for the unnamed beers, he said, “We’re working on that.”

DePietro said he and Trombley plan to have many “one-offs” — using whatever is in season to make a beer. He gave the example of making a wild-yeast beer using frozen strawberries from the farm.

“I love brewing IPAs and more of the classics, but everyone does that, and there’s a lot of breweries in Maine, so we want to keep it close to the farm,” DePietro said. “Not to say we won’t brew one of those beers in the future, but we are kind of starting out with some off-the-beaten-path (brews).” 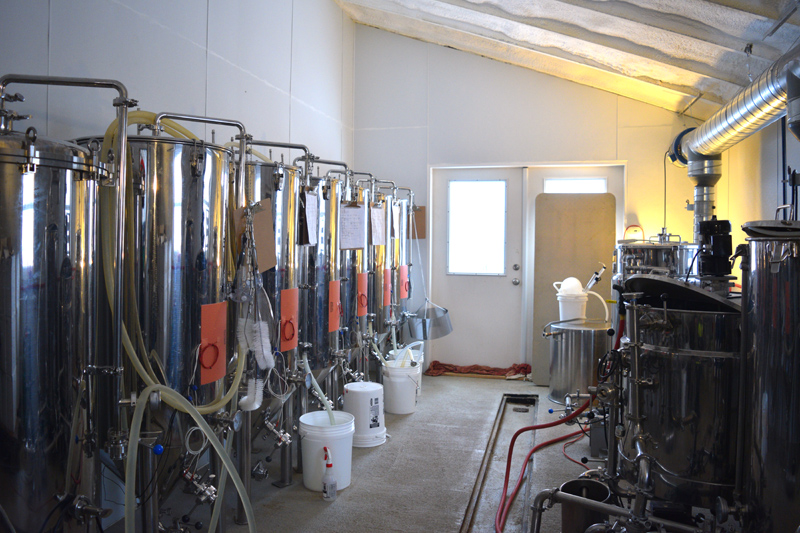 DePietro has about seven years of experience in brewing.

At age 19, he took his first job in the brewing industry at Times Square Brewery in New York City, where he apprenticed under a German brewmaster.

DePietro also worked at Mountain Valley Brewing Co. in Suffern, N.Y., where he learned bottling and other skills.

He was the assistant brewer at Brooklyn Brewery in New York City.

Before heading into the world of farming, DePietro’s last position was as an assistant brewer at Great Adirondack Brewing Co.

Trombley and DePietro wholesale their beer to restaurants and stores and retail it at the Bath Farmers Market. They do taste tests twice a month at the farmers market, which is open on Saturdays year-round. The market’s winter hours are 9 a.m. to noon. 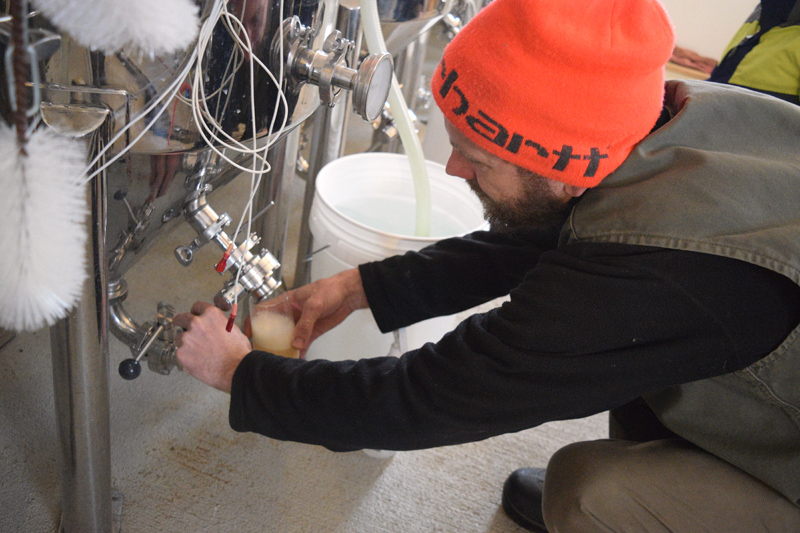 Kyle DePietro, one of the owners of Sasanoa Brewing, pours a glass of organic ginger-lime-basil beer, a Belgian-style beer. (Jessica Clifford photo)

Currently, Sasanoa Brewing’s beer is wholesaled to Newcastle Publick House; to Concinnity Deli & Lounge and Salt Pine Social, both in Bath; and to Rising Tide Co-op in Damariscotta and Treats in Wiscasset.

Area stores recently received their first batch of bottles to sell on the week of Dec. 17-21. Bottles are sold individually at $14 for 750 milliliters, about the size of a wine bottle.

In the future, DePietro said they want to do 500-milliliter bottles for special “one-off” brews.

Sasanoa Brewing sells kegs to restaurants that have the capability to serve draft beers.

DePietro said he and Trombley are limiting wholesaling to the Maine coast for now, to keep delivery easier. “We will pretty much be going to beer stores everywhere from Belfast to Portland,” he said. They have been in contact with about 40 retail stores.

As for naming the brewery, “It took a long time,” DePietro said. “All the names we were thinking of were taken. There’s a lot of breweries out there. We’d find a good name that we really liked and Googled it, and sure enough, there’d be a brewery out there with that name.” 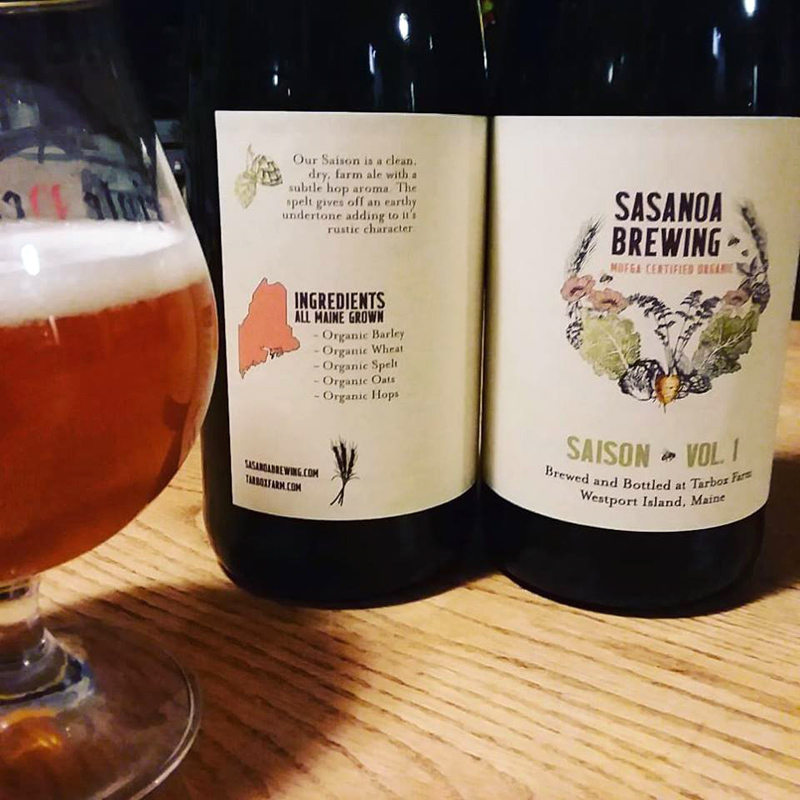 In the end, the couple was influenced by their surroundings. Behind the farm and the brewery flows the Sasanoa River, which connects the Kennebec River to the Sheepscot River.

Though no one can purchase Sasanoa Brewing beer at Tarbox Farm currently, DePietro said he and his wife hope to open to the public by spring, after more cleaning and construction work is complete. They envision using the greenhouse adjacent to the building where they brew their beer to have picnic tables.

The pair is hoping to be open one or two days a week.

Once the brewery is open to the public, produce will be on sale, and possibly cured salami from the farm’s pigs and bread from local bakers.

“The idea is people can come down to the farm, check out the farm, see how things are growing,” DePietro said. “And have a beer.”