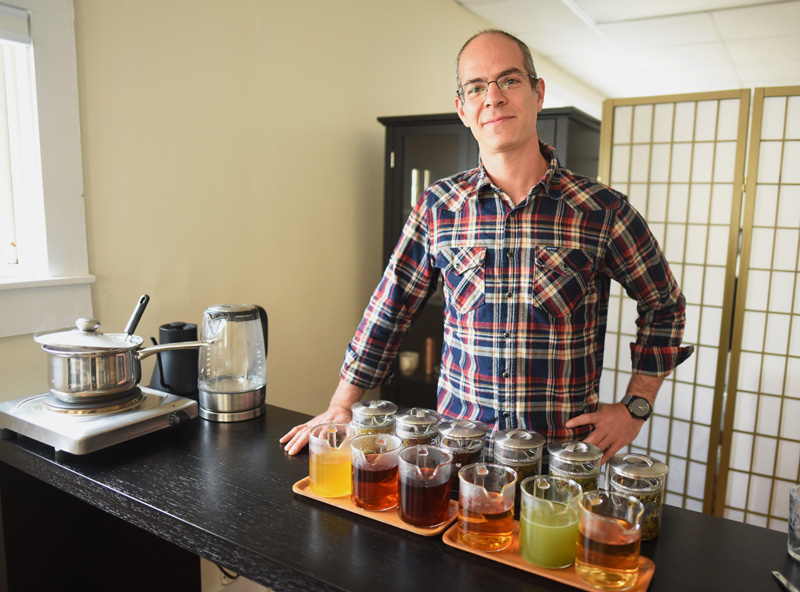 Samovar Tea, which has multiple locations in California and is served in restaurants across the country, has opened its first location on the East Coast in downtown Newcastle as a tea shop and tasting room.

The new location, at 77 Main St., is being operated by the company’s president Joshua Jacobs, brother of founder Jesse Jacobs.

Jesse Jacobs started the tea company in 2002. The brand, which has about 50 different teas and herbal infusions, has since expanded to include four locations in San Francisco, along with the newest location in Lincoln County.

Two of the California locations are tea-themed full-service restaurants, or lounges, and the other two are tea houses with more of a cafe concept.

The name Samovar originated from the traditional Russian tea-brewing device of the same name.

“The Russian phrase to ‘have a sit by the samovar’ means to enjoy a leisurely talk whilst sipping tea – the very experience we strive to offer at Samovar: the same welcome, the same opportunity for relaxation and reconnection in a warm place,” Josh Jacobs said.

The company’s new location in Newcastle is a tea shop that is open by appointment, as well as a tasting room every other week on Tuesday afternoons. 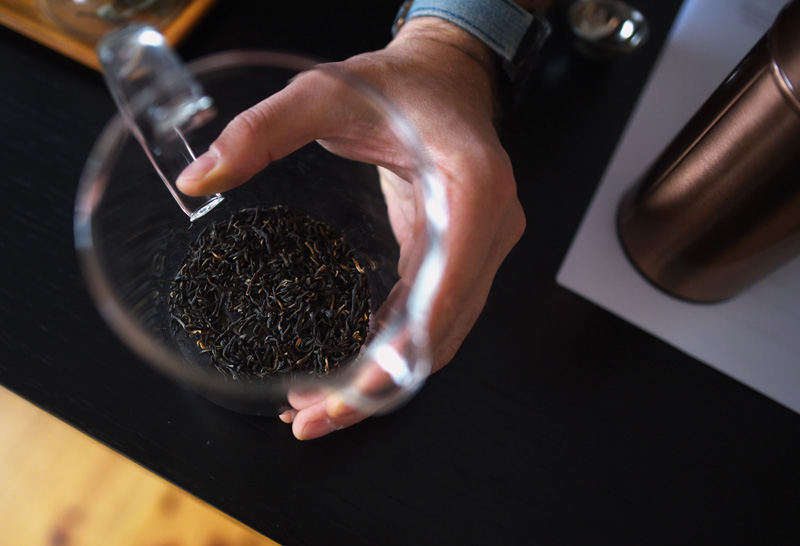 “We’re kind of testing out how the market is on the East Coast,” said Josh Jacobs, who lives in Newcastle with his wife and two children. “Tea is one of the most ancient superfoods. It’s just very nourishing, loaded with antioxidants and health benefits, but it’s also energizing and tastes amazing. And there’s so much variety.”

The brothers, originally from Massachusetts, grew up in what Josh Jacobs described as a “foodie” household, with their parents running a cooking school.

“We always had people from around the world living with us,” he said. “They would study and we would eat amazing food, and I think that kind of planted the seeds for a lot of what we’re now doing.”

Josh Jacobs started a website and software consultation company, Mandela Designs, in 1995. He did tech work for his brother’s tea company since its inception, but took on the larger role with the company five years ago. He closed his consultation business two years ago.

“With every cup of tea, we make the world a greener place,” he said. “Our tea is organic, sourced from small family farms.”

Most of the company’s tea leaves are harvested in Asia, from small farms primarily in China and Japan, while the herbals come from all over the world.

The tea tastings, which will give attendees the chance to learn about the drink and try six different teas or herbals, are scheduled for every other Tuesday at 4 p.m. and 5:30 p.m or by appointment.

“We are trying to make craft tea accessible,” he said. “I think the tea industry is having a little bit of a renaissance similar to maybe where beer was in the late ’80s. It just didn’t used to be complicated, beer meant one thing. People are becoming more sensitive to variety and quality.”

The tastings are free through 2018, and can serve around 10 people at a time. 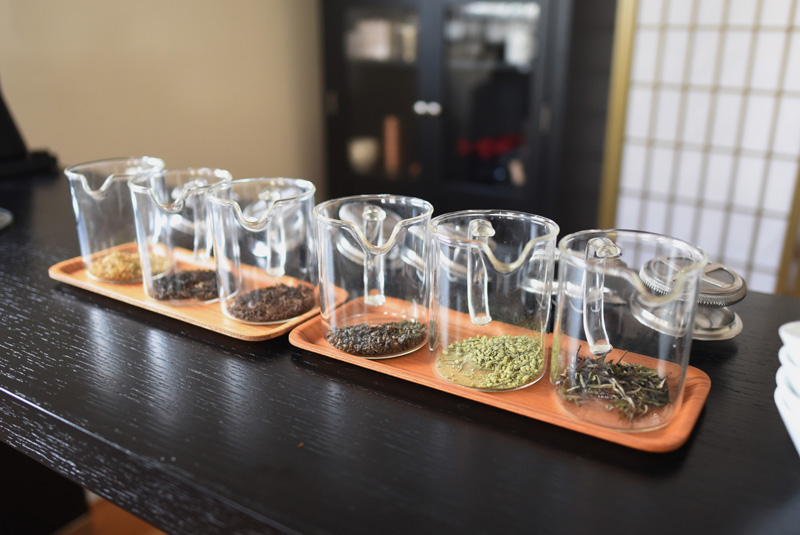 “The great thing about tea is it’s really customizable,” Josh Jacobs said. Tea drinkers can experiment with the amount of leaves, steeping time, and the temperature of the water.

Even the processing method and time of harvest determines what kind of drink tea leaves will make.

At a tasting, attendees can expect to smell the leaves and try the different flavors in cups designed to concentrate the aroma and taste.

“You think about the initial flavor, what you smell, what you taste in your mouth, and then what lingers afterward,” Josh Jacobs said.

Tasters can sample a range of Samovar teas, from the delicate Moon Bud white tea, which has notes of wet hay, cantaloupe, and butter, to the creamy Indian-inspired Masala chai and the turmeric herbal infusion, which is not a tea at all.

One of Samovar’s most popular teas is the Ryokucha green tea, made with macha and brown rice. Josh Jacobs said it creates a wave state in the brain similar to meditation.

The oolong, considered “the fine wine of tea,” is often best after the third infusion, due to the leaves being tightly rolled. The taste has hints of warm caramel.

“A good, high-quality tea can yield 15, even 20 infusions,” he said. “It becomes more mild the more infusions, but that’s sometimes just what you want as the day goes on – less caffeine.” 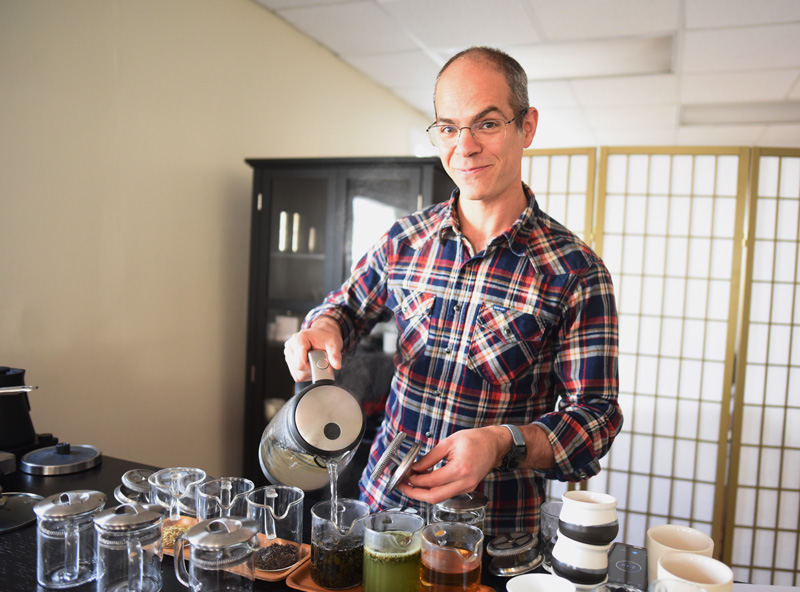 Josh Jacobs said one of his favorite teas is the pu-erh, for which the leaves are fermented and aged during processing.

“It has a really earthy flavor to it, almost a smokiness, like walking in the woods in autumn,” he said. “Personally, with the pu-erh teas, I always find I just feel very creative.”

“I think people like sweet and salty and bold flavors in general, but beyond that, it’s just what it reminds you of, what memories it evokes,” he said.

He said the company hopes to expand further on the East Coast.

Some local businesses are already selling or serving Samovar tea, such as Barn Door Baking Co. and Riverside Butcher Co., both of Damariscotta.

Samovar sells the tea ware it uses in its shops online.

“Everybody knows tea, but few know tea at the level that we offer,” Jesse Jacobs said. “Our mission is to make the world a better place by connecting people.”

“Long, cold winters may make for happy tea drinkers,” he said of having a new location in Maine.

For more information or to sign up for a tasting, visit samovartea.com, email hello@samovartea.com, call 650-784-0336, or find the business on Facebook.