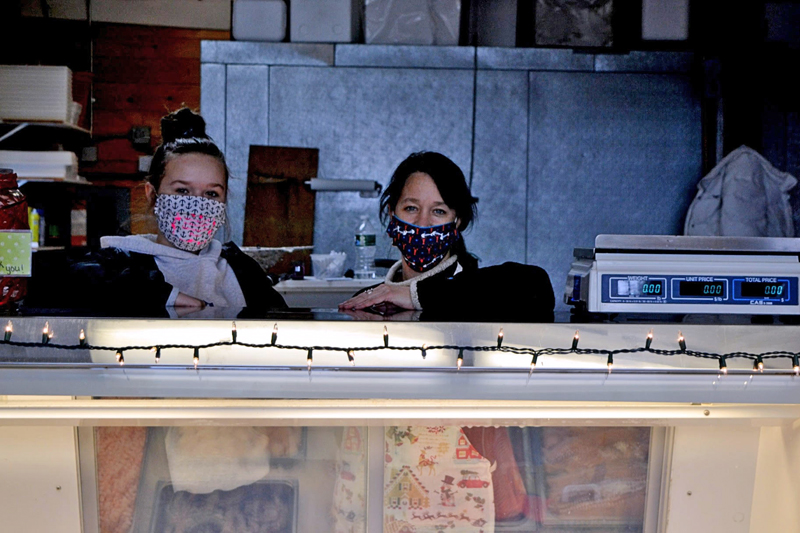 “People have been knocking on our windows just to say, ‘We’re happy you’re here,’” manager Jaime Moore said. “We’re so happy to be back.”

Last January, the business was facing financial challenges and the previous owner, Jaime’s father, Rob Avery, was ready to retire after running the market for over a decade. He had bought the market with his son, Heath Reed, in 2002, sold it in 2004, then bought it back in 2012.

When Heath left in 2018 to cut fish at Harbor Fish Market in Portland, Jaime stepped in to help her dad.

Jaime now operates the market with her oldest daughter, Sydney Moore, keeping the legacy of the fish market within the family. A business partner and investor, Jeff Rich, owns the business.

“I feel like this fish market is such an asset to our community. It’s been a series of emotions — sad, humbling, and uplifting — to shut down last winter and then reopen this winter,” Jaime said.

Jaime had hoped to reopen before Thanksgiving, but the process of attempting to sell the market during the COVID-19 pandemic delayed her plans.

Buyer after buyer fell through until Jaime and her father found one willing to reopen it in October. The buyer moved in quickly and completely disassembled the counters, display cases, and main floor. They left the inside of the market in total disarray, Jaime said, then backed out of the deal a month after buying.

“I remember sitting down on a lobster crate and thinking, ‘How am I ever going to reopen?’” Jaime said. 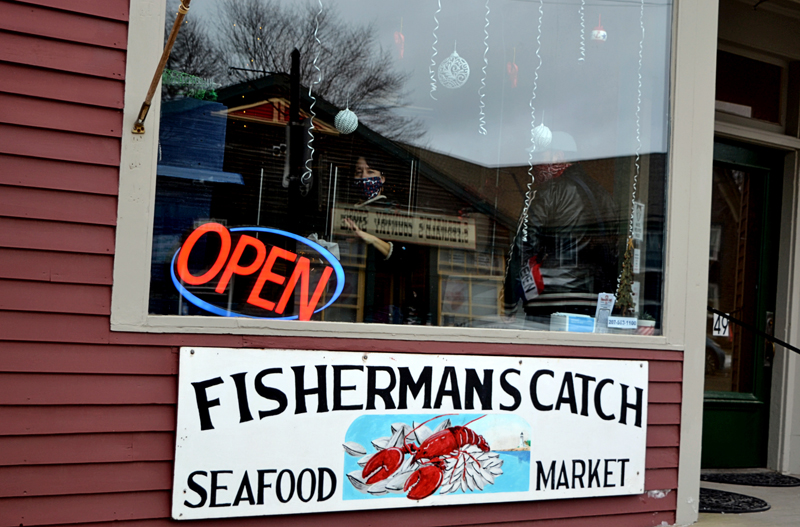 Jaime scheduled carpenters and plumbers to reassemble everything that had been taken apart. Family members and friends dedicated their time and money to reopen by Dec. 3.

“I’m learning that it takes baby steps to get where I want to be,” Jaime said. “For now, it’s enough to have fresh fish stocked and lobsters in the tank.”

Although Jaime doesn’t come from a family of fishermen, she finds her happy place on the ocean. After graduating from high school, she moved to Five Islands, a fishing village in the island community of Georgetown, and spent two seasons lobstering and shrimping on a 32-foot Osmond Beal lobster boat.

“I can relate to fishermen when something’s going on, like boat trouble or bad weather,” she said.

She learned the business side of the seafood industry from working at Cantrell Seafood Market on Bailey Island, in the town of Harpswell.

Fisherman’s Catch will continue its long-standing legacy of selling quality retail and wholesale seafood. Jaime buys fish on a daily basis and processes it in a facility tightly controlled for food safety. It’s then iced and kept cold from catch to fry pan.

Jaime will also sell farm-fresh produce and herbs, and a selection of cocktail sauces, seasonings, and marinades.

“My mission is to preserve the legacy of Fisherman’s Market — that is quality seafood — and add my own unique twist,” Jaime said.

(Correction: An earlier version of this article online and on the front page of the Dec. 10 edition gave an incorrect phone number for Fisherman’s Catch Seafood Market, incorrectly spelled Jaime Moore’s first name, and incorrectly identified her as the owner of the market. She is the manager; Jeff Rich owns the business. The Lincoln County News regrets the errors.)