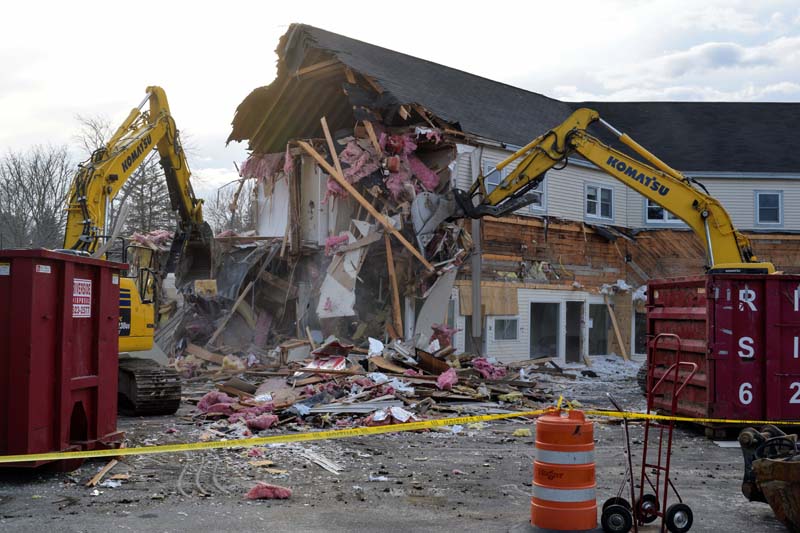 Excavators tear down the west wing of the former Damariscotta Bank and Trust operations building on the morning of March 15. (Nate Poole photo)

On March 14, Bangor Savings Bank embarked on the demolition of the former Damariscotta Bank and Trust operations building behind the bank’s downtown branch location at 100 Main St.

Bangor Savings intends to construct a parking lot in the vacated space for the Damariscotta branch, additional parking for the community, and a public green space on the waterfront, according to Kim Pope, senior vice president and director of consumer banking at Bangor Savings Bank.

“Removing the building provides our employees, customers, and community with necessary additional and convenient parking, and safe accessibility to our branch,” Pope said.

Pope said the decision to demolish the building was made following “a recent evaluation of condition.”

The property, identified on tax records as 20 Griffin Lane, was once known as the Chasse Building. Damariscotta Bank and Trust renovated the building in the mid to late 1980s, according to a revitalization plan that included five commercial units on the first floor and five apartment units on the second floor.

The demolition is expected to take less than one month with the goal of minimizing the impact on customers and neighbors downtown. Bangor Savings Bank donated much of the furniture and equipment from the building to nonprofits like the Damariscotta Historical Society and others.

Damariscotta Town Manager Matt Lutkus said some citizens expressed discontent with the building’s demolition and asked the town to stop it, according to an email to Richard Flewelling, senior staff attorney at Maine Municipal Association on March 10.

Lutkus asked the attorney if the town faced any requirement to put the demolition through a review process.

In his response to Lutkus, Flewelling said there are no state laws that regulate general building demolitions or that require municipalities to regulate demolitions. He added that if Damariscotta does not have an ordinance pertaining to general demolitions, it cannot review, regulate, or prohibit the demolition of the building or any building outside of the historic district.

In another email, Lutkus said that, personally, he does not support subjecting businesses to additional regulations.

“Citizens who are interested in matters such as this need to take a more proactive role in their town government. There are many opportunities to do so,” Lutkus said.

On March 3, Jenny Begin, a member of the Damariscotta Planning Board and Comprehensive Plan Committee, said she views the building as “town infrastructure” that would be nearly impossible to build downtown today and that it could be better used for affordable apartments and commercial spaces.

Moore already owns 40 apartments in Wiscasset targeted towards members of the local workforce. That is to say, he typically charges $800 to $850, with utilities covered, for those who don’t qualify for Section 8 housing but don’t necessarily earn enough to afford a home in the Midcoast region.

Moore said that it could be that part of the bank’s reason for tearing down the building is the money it will save on property taxes.

A few weeks prior to the demolition, the bank informed Moore that they were no longer considering selling the property to him.

“I don’t know what their goal was, to be honest,” he said.

In response to questions regarding the bank’s decision to reject Moore’s offer, Bangor Savings Bank Vice President and Community Relations Manager Jaclyn Fish said that she could not comment on the matter.