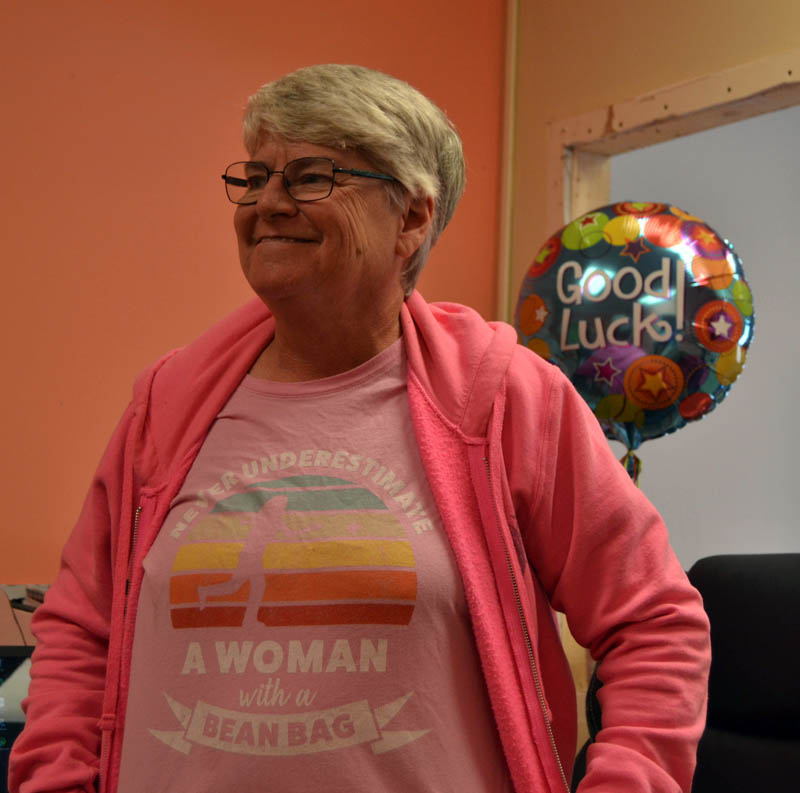 Penny Dostie displays a cornhole-themed T-shirt in her Waldoboro office at The Cornhole Connection. Dostie celebrated the grand opening of the business at its new Waldoboro location on Saturday, Oct. 1. (Elizabeth Walztoni photo)

A group of six women brought together by the backyard game of cornhole have recently relocated The Cornhole Connection from Thomaston to Waldoboro.

Owner Penny Dostie began sharpening her skills two years ago after learning to play the game at a campground. She opened her first store and event center — the only cornhole store in Maine —in Thomaston in March 2022, kicking off her “second career” after retiring as a custodian at Warren Community School. Now, with the help of a growing collection of friends, she’s moving to a bigger space in a central Midcoast location.

Dostie opened the Thomaston site, which the business quickly outgrew, with her general manager Cameo Sampson. They are joined at 1607 Atlantic Highway in Waldoboro by friends Sheri Crouse, Janet Knowlton, Wendi Reed, and Jessica Pooley. The new space features more lanes, more leagues, and many possibilities.

Cornhole, a game of tossing handheld bags into a target on a board, is growing as an organized sport. Formal play has taken off in Maine from Portland to Bangor, according to Dostie, with players traveling across the state to play in leagues and tournaments.

The Cornhole Connection fills an opening in the Midcoast market. Enthusiasts who drove to Augusta and Waterville to play now have a community close to home, she said. Their indoor space featuring five 27-foot lanes allows cornhole regardless of the season, weather, or hour.

“Cornhole is everywhere,” Dostie said. “It’s on ESPN. It’ll be in the Olympics one day.”

She has reason to believe that cornhole is contagious; several of her business partners were converts. Even if they felt skeptical at first, they said, the accessibility, skill, and fun of the game drew them in.

“It doesn’t matter if you’re good. We don’t do it expecting to win,” said the business’ technology manager Reed, who met Dostie playing cornhole while camping.

“Your age, your gender, doesn’t matter” either, said company designer and friend Knowlton. “We’re women-owned, some of us are retirement-aged, and we’re breaking barriers.”

Some of the specialty boards at The Cornhole Connection in Waldoboro. (Elizabeth Walztoni photo)

“Cornhole is a learning process. There’s a lot more to it than you think. It’s competitive, but people want to help you,” said Crouse, general contractor and Dostie’s friend since childhood.

“We got a 5-year-old at the (American) Legion who’s unbelievable. He beat me,” Dostie said with a laugh.

Crouse returned to Maine from her second home in Florida to lead work on the space in Waldoboro. Dostie said that she signed the lease on Sept. 1 and major renovations were carried out by the group themselves in less than a month.

“I don’t think anybody had any expectations,” Knowlton said. “We were just determined to get it done.”

The location opened Tuesday, Sept. 27. The first event in the new building, a small tournament, was held on the evening of Wednesday, Sept. 28. Its grand opening celebration took place on Saturday, Oct. 1.

The Cornhole Connection hosts five weekly leagues — mixed, men’s, women’s, kids, and seniors — along with open play, special events, fundraiser tournaments, space rentals, and more. Local businesses can sponsor a board for one year or sign up for company cornhole parties.

The group is particularly interested in community fundraisers, but said possibilities seem endless.

The building will share space with a small arcade headed by Jessica Pooley, Dostie’s first realtor for the project and another cornhole convert.

“Penny contacted me a year and a half ago,” Pooley said, “and told me she wanted to open a cornhole store. I said, ‘What?’ and laughed, and called up the owner of another location she had in mind, and we laughed together. Now I’m the one saying, ‘Can I play?’” 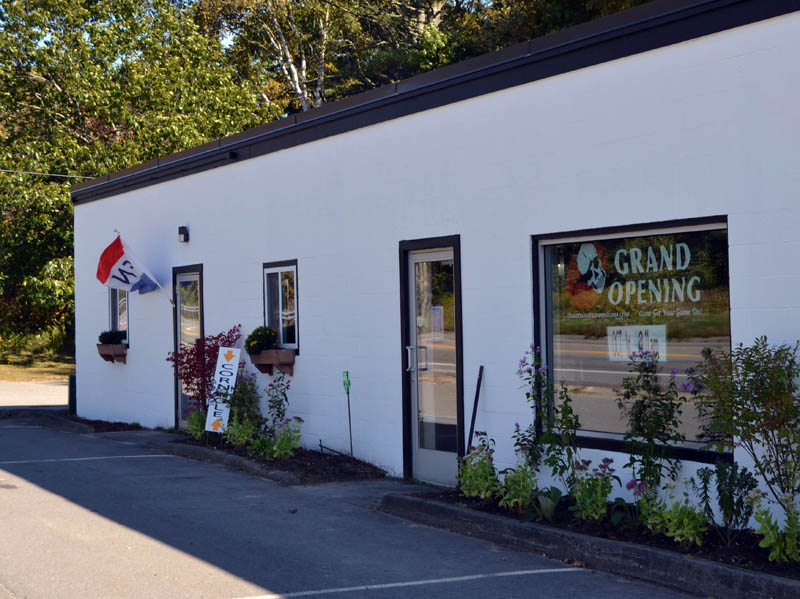 The Cornhole Connection, at 1607 Atlantic Highway in Waldoboro. The business celebrated its grand opening on Saturday, Oct. 1. (Elizabeth Walztoni photo)

Pooley is a regular at the new location, where she is preparing for the installation of three arcade games and a vending machine in her portion of the space. Any more arcade games would require approval from the Waldoboro Planning Board, and she said she expects to pursue this expansion in time.

Dostie and company plan to grow their operations, too, with a small beer and wine bar, pub food, and wall-mounted televisions.

“You’ve got to have beer with cornhole,” Reed said. “A bag in one hand and a beer in the other.”

The Cornhole Connection is open 11 a.m. to 9 p.m., Tuesday through Sunday, and runs $15/hour/person in leagues and open play. Its retail section carries a selection of boards, bags, merchandise, and more.

The store also offers connections to custom board makers and suggestions for bag choices.

The team wants to be involved in the area, they said.

“We’re really lucky we have each other,” said Reed, adding that neighbors have stopped in to tell her that the community space is “much-needed here.”

“This is our happy place,” the women agreed, saying that coming in to The Cornhole Connection doesn’t feel like going to work at all.

“You’d better learn to love cornhole,” Dostie said she told her adult daughter, “Because it might be your inheritance.”

For more information, go to thecornholeconnections.com or call 790-8033.