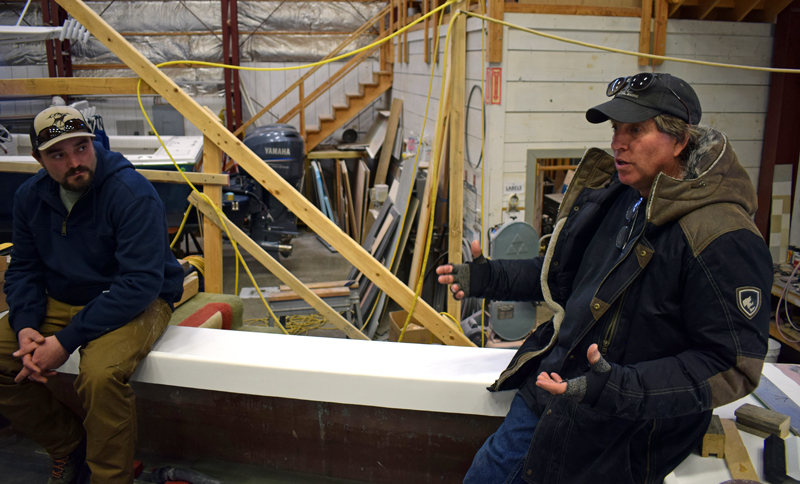 Gamage Shipyard General Manager Mike Tatro (right) stands on a Holland 32 boat as he explains the boat-building process while the lead boat builder on the project, Dylan Chase, looks on. (Evan Houk photo)

South Bristol’s Gamage Shipyard will launch its first new build of a boat in nearly 40 years this spring.

The shipyard has functioned mainly as a marina and storage site, as well as a full-service refit and restoration shop, since launching its last new build in 1981.

In 2015, owner Rory Cowan hired Mike Tatro, general manager at Gamage Shipyard, to bring skilled boat builders onto the crew and get back to the yard’s roots building new vessels.

The shipyard currently has two recreational vessels under construction, both due to launch later this spring: a Holland 32 and a Flowers 38. The Holland 32 is a complete new build that started with a bare hull, while the Flowers 38 is the completion of a build started by a different shipyard.

The Holland 32 is a Downeast boat, a traditional style modeled on the design of working lobster boats. It is 32 feet long.

The Holland 32 under construction at Gamage is a spec boat designed as a pleasure boat, or day boat. Gamage is building and launching the boat as part of the shipyard’s effort to get the word out that it is back in the boat-building business.

Tatro said the shipyard will offer the boat for sale after its completion and follow-up sea trials, aiming for Memorial Day weekend. He expects the boat to sell for around $200,000. 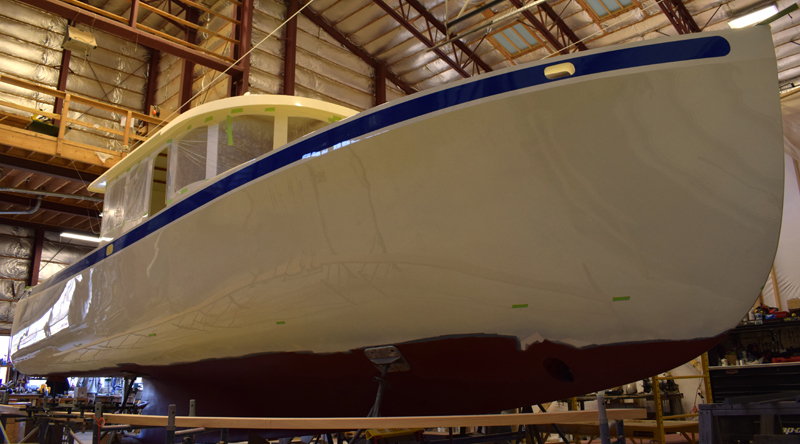 A Holland 32 spec boat under construction at Gamage Shipyard in South Bristol on Feb. 17. This spring, the boat will become the first new build launched by the storied shipyard in nearly 40 years. (Evan Houk photo)

The boat will be jam-packed with modern amenities like electricity, a galley, a small head, and a potable water system.

For the nautically naive, a galley refers to a boat’s kitchen and the head is the bathroom.

“It’ll be basically like a floating apartment,” Dylan Chase, lead boat builder on the Holland 32, said.

The boat-building process began in September 2019 with a bare hull made of composite fiberglass, purchased from Holland’s Boat Shop in Belfast. This provides a blank slate that allows for construction of a meticulously customized boat.

First, Tatro, as general manager, introduces the concept and design of how the boat will be built and then he and Chase communicate back and forth to determine the best and most practical layout and design as the project moves along.

The process appears to be a kind of puzzle, figuring out what systems can fit, and where, inside the bare hull.

Tatro said that first the essentials must be installed, like the engine system, the shaft, and the steering system.

Then, all the extras can be fitted into place.

“So you start doing a map of everything you want in the boat, which is usually about five times as much as can really fit, and start figuring out where you’re going to put everything,” Tatro said.

At this point, the installation begins in a sequential and orderly way to ensure that everything from the layout fits practically into the hull.

Tatro said this particular Holland 32 has been equipped with a 350-horsepower engine that will allow the boat to comfortably cruise at 20-24 knots, or nautical miles per hour. 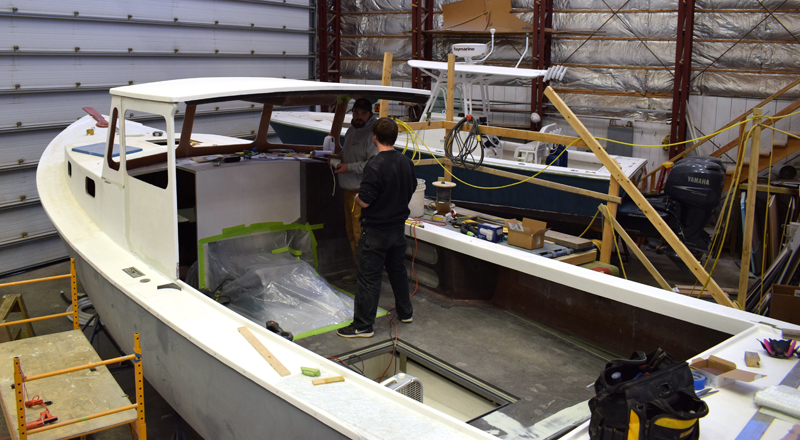 Lead boat builder Dylan Chase and Briland Fisher work on a Holland 32 new build at Gamage Shipyard on Feb. 17. The pleasure boat will be the first new build from Gamage in nearly 40 years. (Evan Houk photo)

He said in-house sea trials will start in early May so the crew can work out any bugs.

“I’ve never seen a boat come out of a new build without any issues,” Tatro said, so something always needs to be fixed or tweaked.

The Gamage Shipyard website describes its 149-year history in detail.

The shipyard began its long tradition of boat building in 1871 when Albion and Menzies Gamage bought the property on the South Bristol waterfront.

Over the next 50 years, the brothers built more than 88 sail and steam-powered boats, many of which were fishing vessels that ended up in the Boothbay, Southport, and Gloucester, Mass. fleets.

During World War II, the shipyard was dedicated full-time to the construction of wooden military vessels, such as minesweepers and ship’s tenders.

The last newly built boat it launched was the 55-foot fishing vessel Windsong, built for Jim Fossett, of New Harbor, in 1981.

Gamage Shipyard is planning a community event to commemorate the launch of the new Holland 32 in late spring.