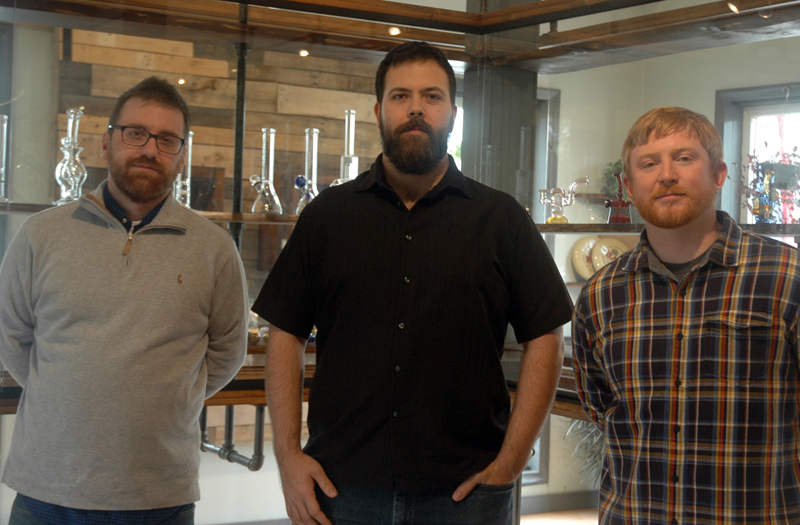 A boutique that sells handmade glass pipes and other products, along with a separate medical marijuana caregiver storefront, have opened their doors near the junction of Route 1 and Route 32 in Waldoboro.

Rossi estimated that well over 300 people came by to check out the new store on its opening day.

Located at 21 Winslow Mills Road, the boutique, with its naturally lit interior reminiscent of an art gallery, offers a variety of glass, both dry and water pipes, in different sizes, at prices ranging from $10-$1,500.

Rosen said a main goal of the new business is to create a welcoming and aesthetically pleasing space for customers to visit.

“We are looking to set a new standard for stores across the state,” Rosen said.

“We want to break the classic stereotypes associated with head shops,” Doherty said.

A separate company with a separate entrance at 21 Winslow Mills Road, Herban Cannoisseur, run by Rosen, the sole licensed caregiver on site, is a medical marijuana caregiver storefront.

A caregiver storefront can only serve five customers at any one time under the law.

Rosen said that in addition to unique glass creations, including pieces by Maine and New Hampshire artists, Highbrow offers vaporizers and “CBD” or cannabidiol products. 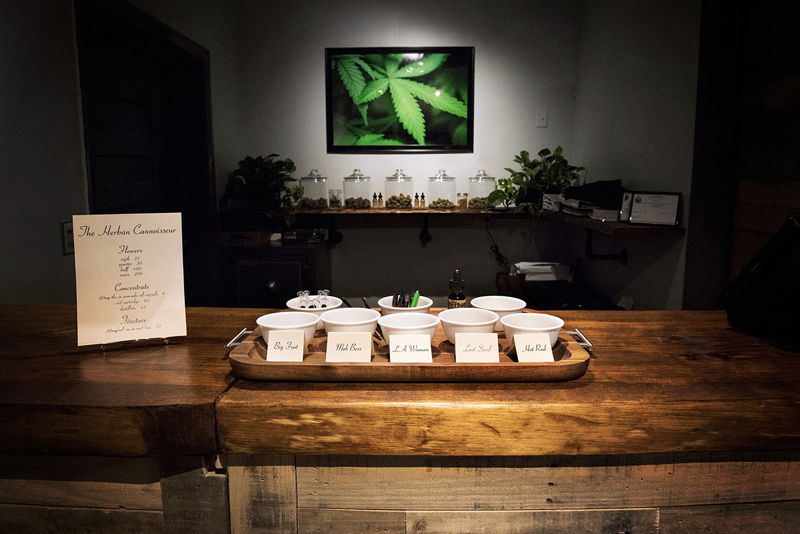 A display at the Herban Cannoisseur features products with names like Big Foot, Lost Soul, and Mob Boss. The medical marijuana caregiver storefront shares a building with Highbrow Maine at 21 Winslows Mills in Waldoboro, but is a separate company with a separate entrance. (Photo courtesy Noah Rosen)

Rossi said the vaporizers are popular with medical marijuana users who prefer not to smoke their prescriptions. He said CBD products include creams, salves, and soaps, which have anti-inflammatory properties and can help with pain.

Rossi said cannabidiol products are made from the non-psychoactive cannabinoid of the cannabis or hemp plant.

He said the store also offers CBD pet treats to help animals with pain and anxiety.

Rosen described the weeks leading up to the grand opening as a whirlwind experience, involving painting, drywalling, and installing displays.

Rosen said he signed the lease for the space in mid-January, received planning board approval in February, and spent the six weeks after getting the go-ahead from the town working on the space.

Rosen said a large load-bearing pillar in the center of the store created some design issues at first, but ultimately the feature was incorporated into the glass display shelves located throughout the store.

“We wanted to have a conversational piece, make a boutique-style statement,” Rossi said.

Rosen said that throughout the construction process and the store’s grand opening, an effort was made to support area businesses, with local mills, carpenters, and garden centers called upon to help transform the space.

“I said it during the planning board meetings: I want to support local artists and local businesses,” Rosen said.

Doherty said in the future the gallery may add more displays, but the goal is to keep the floor space open.

Rossi agreed with his colleague and said the store would avoid becoming crowded.

“We don’t want it to become crowded. We want the business to feel more like a gallery than a head shop,” Rossi said.