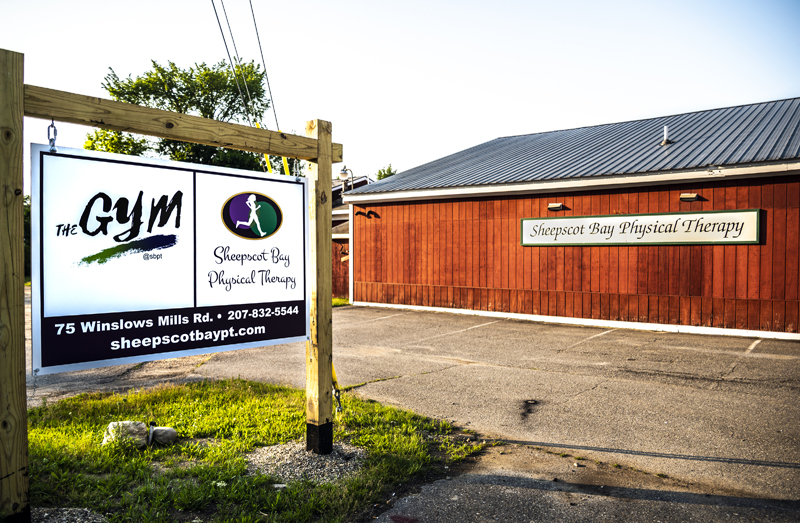 Dr. Jean Beattie, owner of Sheepscot Bay Physical Therapy, was interested in a space where she could combine her existing physical therapy practice with the new fitness venture. TheGym@SBPT is doing business under the umbrella of the Sheepscot Bay Physical Therapy. The name was chosen to distinguish between the two purposes, open gym versus physical therapy practice.

Beatty purchased the building at 75 Winslows Mills Road, along with most of the exercise equipment, from previous owners Leslie and Evelyn Crouse. The building had been home to the Crouse’s businesses, Resolutions Fitness Center and the Riverside Billiards Hall.

Resolutions Fitness Center closed in October 2020 after its membership dropped due to COVID-19. The Crouses officially closed the billiards hall on May 26 when they sold the building.

“We have a fabulous reputation for physical therapy, but we needed more,” said Janie Miller, business manager for Sheepscot Bay Physical Therapy, including TheGym@SBPT. While the physical therapy practice remained open to clients over the last year, Miller said the business needed a new revenue stream.

Opening the gym was an opportunity for Sheepscot Bay Physical Therapy to diversify its offerings and differentiate itself from other physical therapy practices. “It’s a great dovetail between wellness and physical fitness,” Miller said.

The gym has a full cardio room with treadmills, rowers, and elliptical machines. There are circuit machines and steppers on the equipment floor, and a strong free weight section that Miller said is “very inclusive” to serve a full range of clients.

The gym has several different membership levels and discounts for graduating physical therapy patients. There are special rates for seniors, the military, both active duty and veterans, as well as public safety officers, which includes emergency medical service personnel, police, firefighters, and corrections officers.

There are also programs for student athletes who participate in team sports at local schools, Miller said.

The gym is also currently running a “couple’s special” in which a second membership is available at half price which Miller foresees lasting into the fall.

“We want to create a community go-to wellness environment, “Miller said. “We have progressive plans.”

Those plans include adult fitness classes, a nutrition bar, even a kitchenette where a licensed dietitian could teach cooking classes. “We want input from the community on what they would like to see,” Miller said.

There are plans to add more electronics, including Wi-Fi access for gym members and additional televisions. Miller wants to update the locker rooms and add private changing areas.

The tanning booth will be relocated so they can knock down a wall in order to add lift stations and battle ropes. Miller said they are looking into adding a push-pull sled to the offerings for weight lifters.

Within a year Miller said they want to add an annex for group classes like tai chi, yoga, and kickboxing.

Miller said she and the staff are looking forward to the return of senior members, who she considers key to the gym’s successful future. She foresees a “stay in motion” class led by a fitness trainer, oriented to those who need mobility and balance training.

Miller said the gym plans to hold fitness events with individuals with notable backgrounds such as weightlifting and bodybuilding champions, experienced runners, and a variety of fitness enthusiasts. “We really want to expand the business to figure out how to benefit the community,” she said.

Miller said hiring has not been a problem, and that they have “a fantastic staff” including one full-time crew lead and several part-time employees. According to Miller, the staff has dubbed themselves “the gym crew.”

Crew leader and personal trainer Hannah Osier said she’s always wanted to work at a gym. “It’s definitely my passion,” she said. Osier is a month away from obtaining her personal training certification.

Osier said she fell in love with powerlifting and is a strong believer in the benefits of compound movement in which multiple muscle groups are involved. “You burn a lot more calories lifting weights,” she said.

Miller said the gym had signed up 15 new members by 3 p.m. on opening day. She said there is a good mix of regulars from Resolutions as well as members new to the gym experience in Waldoboro.

“I think the word is getting out,” Miller said.

Miller looks forward to expanding the gym’s reach through its social media presence. TheGym@SBPT’s Facebook page debuted on May 31 and Miller said an Instagram page as well as a YouTube channel with fitness demonstrations is in the plans.

TheGym@SBPT is open 6 a.m. to 9 p.m., Monday through Friday and 9 a.m. to 3 p.m. Saturday. Miller said they expect to expand the gym’s hours in the future, particularly during winter when people have fewer outdoor activities available to them.

“A lot of people want to get back to exercising. There’s a social aspect. People missed being able to work out with their friends,” Miller said. “In some ways it represents getting back to normal.”