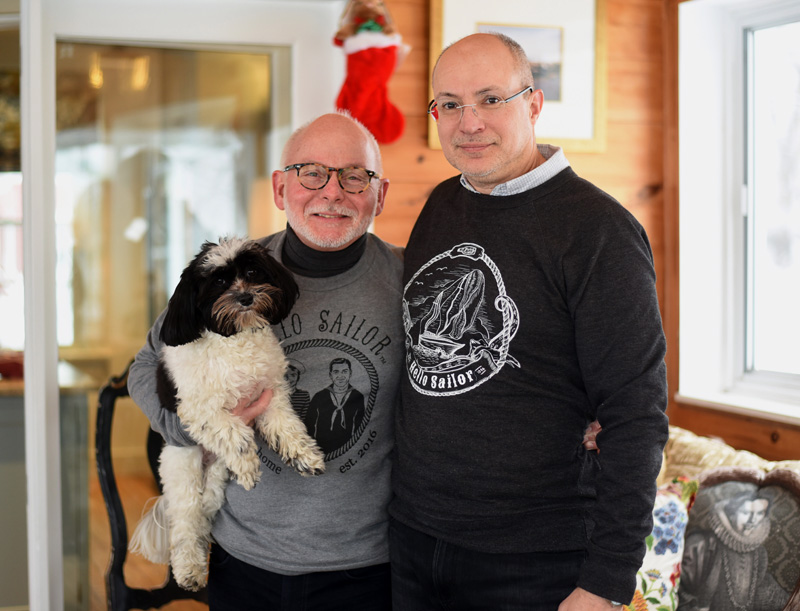 Hello Sailor TMH, a gay lifestyle brand that offers clothing, accessories, and home goods, has recently moved its operations from Maryland to Newcastle.

Owners Danny Cain and Don Bostick moved from Maryland to Newcastle in July to enjoy a “slower pace of life,” bringing with them their companies, as well as their Havanese puppy, Millie.

Bostick is an interior designer and owns Bostick Design LLC. Cain is a psychotherapist with his own practice, Danny L. Cain, PC, where he sees patients by video conference from home.

The married couple came up with the idea for their nautical-themed clothing line while on a vacation in Bath in 2016.

They said the inspiration for the graphics come from sailors, ships, the ocean, and highlighting positivity, pride, and visibility in the LGBTQ community.

“Gay men have always been fascinated by sailors,” Cain said with a laugh.

The TMH in the brand name stands for “take me home,” both a suggestion and a nod to their expanding home goods line.

“It’s been a massive undertaking, more than we knew. And we’re still learning,” Cain said. “While we were comfortable being self-employed, we knew nothing about the retail industry.”

“We kind of just jumped in,” Bostick said.

The brand’s products are available for purchase online, with free shipping within the United States, as well as in certain stores across the country.

The brand can be seen at stores in cities such as Provincetown, Mass.; San Diego, Calif.; Fort Lauderdale, Fla.; and Rehoboth Beach, Del.

The company began offering the products wholesale about a year ago. Bostick and Cain said that they would enjoy having local businesses sell their merchandise in the future.

Some of the designs are more conservative, while others use double entendres such as “Looking for SeaMen,” featuring a graphic of a sailor.

“Our graphics are not so suggestive; they’re kind of more neutral,” Bostick said.

“We wanted it to be fun and flirty, but not raunchy sexual,” Cain said.

The first time they presented their products to the public was at Boston Pride in 2017.

Cain and Bostick said that they did not anticipate the amount of interest in the products from women and straight allies.

“As many women bought our things as men, if not more, that day,” Cain said.

The couple said that they are probably going to create more unisex clothing in the future.

“We’ve kind of expanded our idea a bit to include those (unisex items) and have more neutral images that anyone would be comfortable wearing,” Cain said.

The brand is continuing to expand and Cain said that they are hoping to add more designs, home goods items, and kitchen items, such as aprons, napkins, and hand towels.

“People are excited about it and sometimes offer helpful ideas,” Cain said. “We love feedback.”

Their products are printed at Liberty Screen Print Co. in Connecticut, which is women-owned and a certified LGBT business, according to its website.

Some of the profit from Hello Sailor TMH is donated to support LGBTQ youth.

“We very much want to give back, so we make regular donations to The Trevor Project,” Cain said. The Trevor Project is a national organization that provides crisis intervention and suicide prevention services to LGBTQ youth.

“We grew up in a day and time where there were no visible role models, and aside from the support we found from peers upon coming out, dealt with the process of coming to terms with our orientation alone,” Cain said. “Contributing to The Trevor Project helps others struggling to feel less alone.”

Cain and Bostick said that their products can be fun, unique, or even quirky gifts. They focus on the quality of their products and try all of the merchandise before offering them to the public.

“We’re just thrilled to be here in Maine,” Cain said.