When David and Summer Galvis moved to Boothbay Harbor last year, they quickly fell in love with a quaint ice cream stand, Sarah’s Scoops. But as Summer and her two oldest children are lactose-intolerant, their ice-cream options were limited.

This sparked an idea that, only one year later, led to David and Summer selling their own handmade, non-dairy ice cream at Sarah’s Scoops. 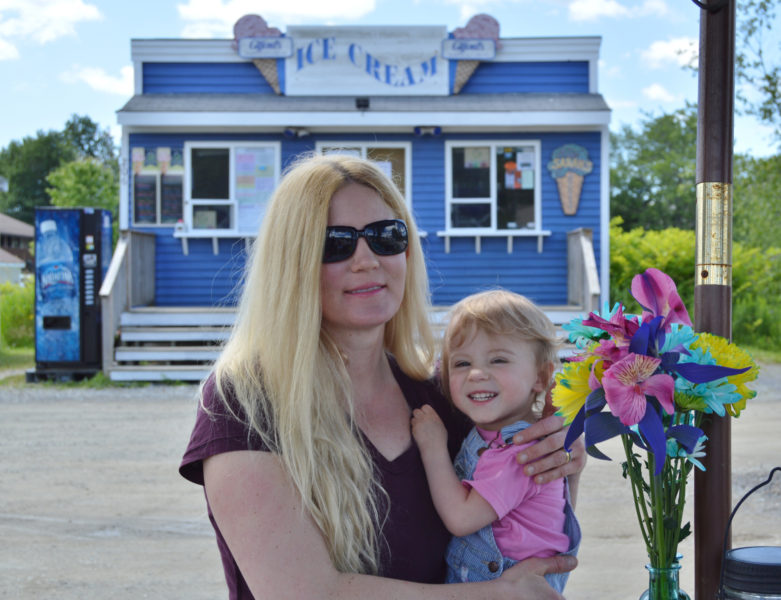 Wild Island Ice Cream is non-dairy or low-dairy, all-natural, and homemade, with most ingredients bought locally. Summer, who went to culinary school, makes the ice cream in their Boothbay Harbor home.

The couple moved to Maine after living in Maui, Hawaii, where they met. They have sold other all-natural food products, like salad dressing and cookies, but this is their first time manufacturing ice cream.

“This was a very natural product for her to make,” said David.

Coconut oil is one of the main ingredients in their ice cream. “I love all things coconut,” said Summer.

Summer said it is important to her to avoid carrageenan, the ingredient that gives ice cream its thick, creamy consistency. She said it goes against her rule of all-natural ingredients.

“That’s why we call it ‘ice cream with benefits,’” said Summer.

As a result, one of the biggest obstacles she faces with new flavors is adjusting the consistency. The other, she said, is ensuring the ice cream survives untouched by herself and family before it’s sent away.

“The sign of a good product is when you don’t want to sell it,” she said.

Summer said she is constantly playing with flavors and recipes.

“I’m really interested in doing custom flavors too. Challenge me, people!” she said.

As coffee ice cream is her favorite, Summer creates many flavors with a coffee base. Wild Island Ice Cream recently teamed up with Hogan Brothers Coffee in Framingham, Mass. to purchase roasted beans for the ice cream.

The family hopes to bring their ice cream to other locations, but for now are happy manufacturing solely for private parties and Sarah’s Scoops.

The name Wild Island Ice Cream is a play on the two places they call home, David said. Maui, of course, is an island, and Boothbay Harbor “very much feels like an island,” said David.

David, a former businessman and corporate investor, said they moved to Maine to raise their family. He visited the area often as a child and was always drawn to its charm.

“People think of Hawaii as paradise, but to us, Maine is paradise.”

Sarah’s Scoops is located at 206 Townsend Ave. in downtown Boothbay Harbor. To place a custom order, go to https://goo.gl/hUyClJ or call 315-6405.