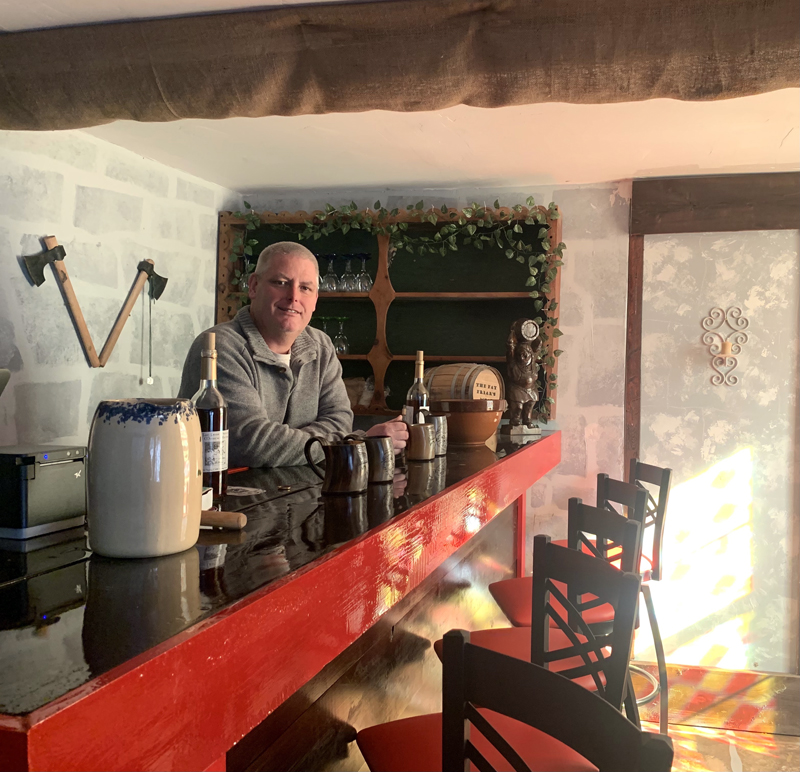 Painter and mead-maker Sean Bailey stands behind the bar he built in 2019 in his in-house tasting room. (Anna M. Drzewiecki photo)

Early documentary evidence suggests that the history of mead-making goes back at least 4,000 years. It is referenced in ancient cultures of India, Egypt, and China. Perhaps elsewhere.

Mead is a fermented drink made from honey, yeast, and water.

Later documentary evidence suggests that the history of commercial mead-making in Newcastle goes back at least 12 years to the inception of the Fat Friar’s Meadery. It is referenced on the fermenter’s website, which boasts a honey-yellow background, and by the fermenter himself: Sean Bailey.

“I like to think of it as a perfect blending of both art and science, both of which I never excelled at in high school,” said Bailey of mead-making. “But you put the two of them together and throw alcohol at it, and I’m pretty happy to be doing it.”

On a mid-winter Friday, the driveway leading to Fat Friar’s Meadery is a tundra. A hanging wooden sign with a yellow arrow points down the dirt lane towards Bailey’s house – and the meadery, which is located in his basement.

With his tucked-away facility, Bailey worries that people don’t know what mead is, or, even if they do, don’t know there are people making it in Maine.

Bailey currently produces six kinds of mead: Original, black cherry, lemon and ginger, pepper, orange, cinnamon, and clove, and one that is hopped. Each recipe has a story and each label the characters from that story, sketched in ink.

In the winter, he tries to keep a rolling stock going; when he gets down to less than four cases, Bailey starts another batch.

He has two more flavors in the works, which he hopes to get fully approved this year. The first one is flavored with sweet woodruff.

“Woodruff is a low-growing ground-covering herb. The Germans put it in their “berliner weisse” beers, and their May wines,” said Bailey, whose wife is German. “It smells like fresh-cut grass, it’s very herbal, so it tastes like a green tea with a hint of vanilla, and it gives a little bit of a green tint.”

The formula is approved but the label is pending with the name: the Burgermeister, Masterburger’s Waldmeister mead.

“A mouthful to say but what a mouthful it is,” said Bailey. 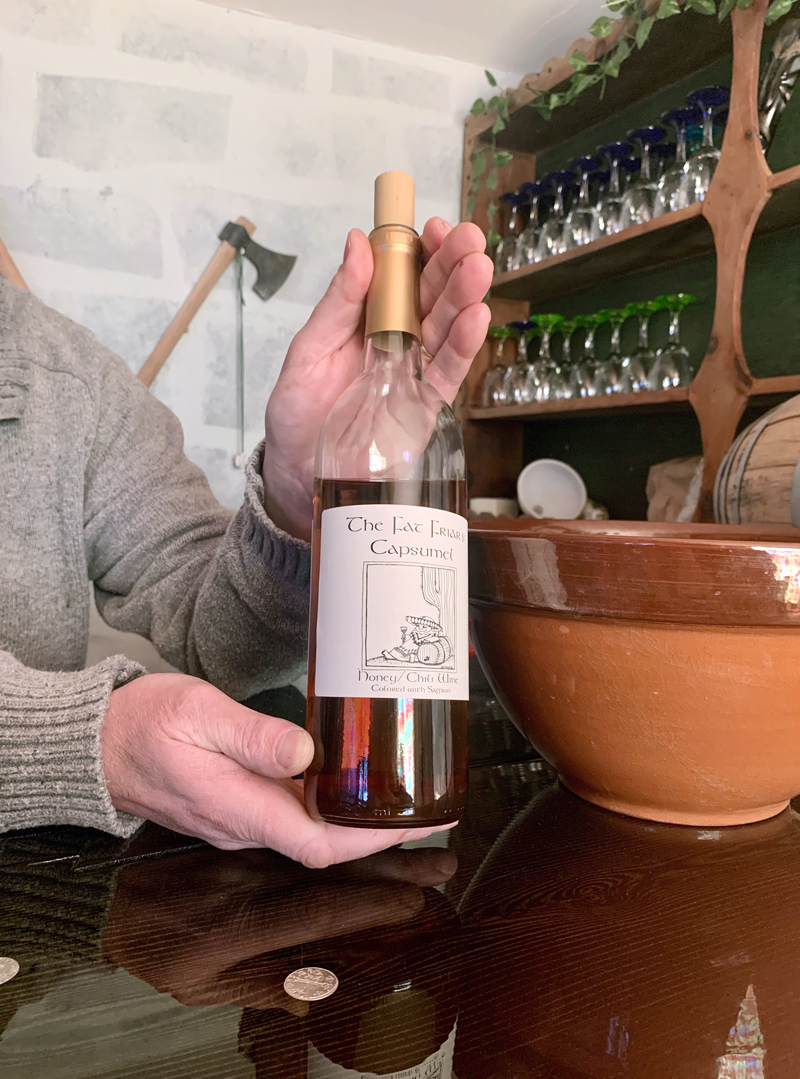 Sean Bailey holds a bottle of one of his six kinds of mead. Two more flavors are on the way. (Anna M. Drzewiecki photo)

The second is flavored with maple syrup and spiced with basil, thyme, and rosemary. According to Bailey, it “tastes almost like a very sweet marinara without the tomato twang.”

The name is still brewing.

Outside, thick snow makes the downhill walkway to the tasting room almost impassable. Inside, under artificial light, mead ferments in grey plastic vats, lined waist high against the wall. Each vat yields about 90 bottles. It is some kind of sweet laboratory, some kind of small-scale techo-hive.

The first step in the process is sterilization. “Then you put the honey in and I put some boiling water into it to sterilize the honey, too, because you don’t want the bacteria,” added Bailey. But not for too long, lest the heat break down the complex sugar and protein chains in the honey.

Getting this right stops the mead from tasting “hot,” a word used to describe the alcohol burn flavor. Next, honey is chilled with cold water and spiced.

Then: Add yeast energizer, cut off the oxygen flow, and get out of the way.

“This one’s done fermenting,” said Bailey, walking over to one of the vats and pulling off its lid.

“See the little foam that’s going on in there? What we want to – see how cloudy that is in there? So we’ve got to get that stuff to settle out,” he added.

Bailey uses fining agents with different electrostatic charges to get “that stuff” to clump together and sink, before the new mead is filtered.

“The only difference between wine and mead is what you use for the sugars for the yeast to eat. So it’s honey versus grapes,” said Bailey.

Bailey sources his honey from New Hampshire. But bees on site are a dream.

“When I get a little more time, I’d like to keep a few hives, just for the sake of having some around,” he said.

Summer is just too busy. Bailey is a full-time painter, owner of Bailey & Son’s painting, now with his daughter. On rainy summer days, the painting crew may find themselves bottling mead or sanitizing vats.

With a little more time, Bailey also has plans for an outdoor gathering space. A picnic area, maybe, or fire pits. 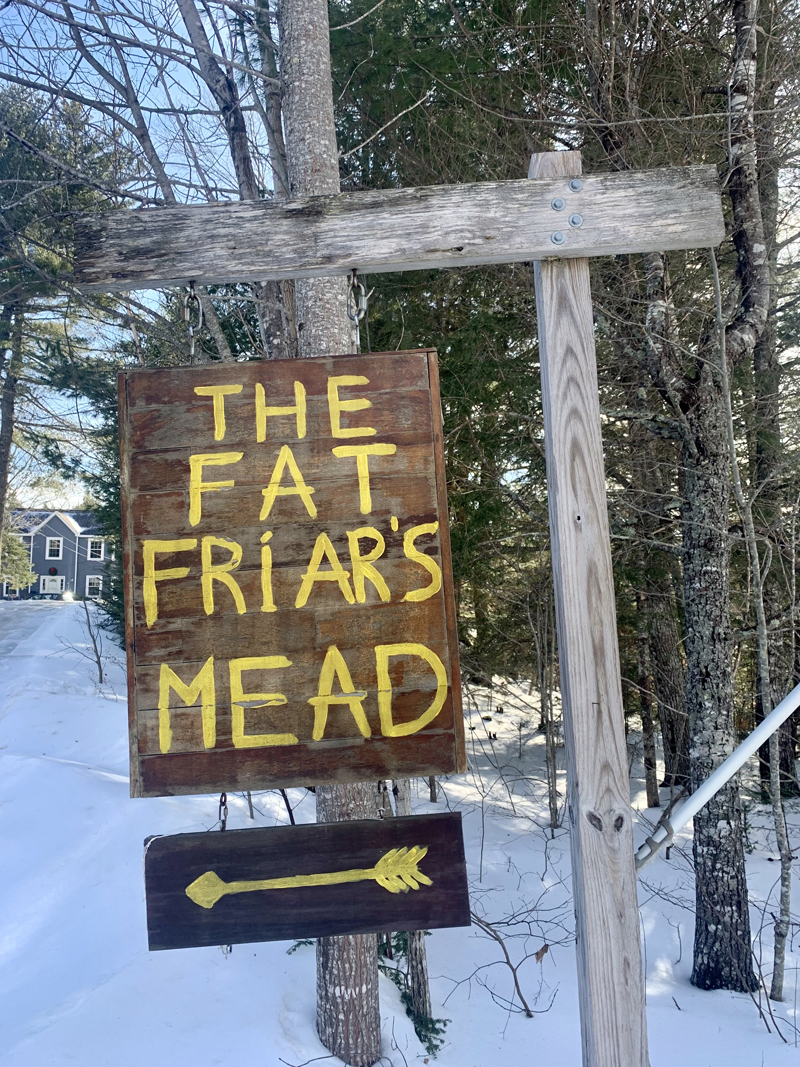 A hand-painted sign points towards the mead-making hive off Route 215 in Newcastle. (Anna M. Drzewiecki photo)

“It would be nice to have a little fenced off area out back where people could just have a glass of mead and maybe some cold cuts and some crackers or breads,” mused Bailey. He’s drawn inspiration from other outdoor arrangements like Tin Top Cider in Whitefield and Odd Alewives in Waldoboro.

He’s working on tap service inside, too. And other inventive ways to bring in new customers, like his drink tokens for tasting flights.

“I’m not in this as a charity. I’m trying to make money,” said Bailey bluntly. “My goal would be to be self-sustaining.”

Bailey said he’s working on a five-year plan to transition away from painting towards the magic, mystery, and joys of mead-making – and full-time.

Magic, mystery, and joy resound in Bailey’s description of his first encounter with the fermented drink. He was traveling in Germany with his “then-girlfriend-now-wife.” They were at a small festival in her hometown, Bailey recalled.

“I came across this one guy that was just sitting at a nondescript table, with an earthen jar, and very small cups, no advertisement. I was like ‘Oh, well, whatever, let’s try it out.’ And he had what was called ‘honigwein,’ or honey wine, which is the same thing as mead just in a different language,” said Bailey. “I tried it and I thought: This is phenomenal, I’ve really got to try to make this.”

Bailey had already been brewing and fermenting for a few years, starting out with homemade beers and hard ciders. When he was finally able to buy an at-home winemaking kit, he was disappointed. It was boring, easy, just mixing a few ingredients.

“There’s no art to that,” said Bailey.

When Bailey returned to the States, he bought some plastic honey bears from the grocery store, and “almost got carpal tunnel trying to squeeze all the honey out.” The first batch wasn’t very good, so he tucked it away in the cabinet.

Six or seven months later, in a late-night pinch, Bailey remembered the mead. With some extra time to ferment, he said, “It was actually kind of good.”

Bailey bought a book, started tweaking recipes, and got a hobbyist filtration machine.

When it came time to fill out his first license, the name was easy, sourced from a stranger who had called out “There goes the Fat Friar!” to Bailey while he was out on Halloween in Damariscotta dressed as a monk – and carrying a bottle of mead.

A lot has changed since then, and is still evolving. Bailey got his first bottler last year, which saves time and energy.

An Italian floor corker rests in the corner, plus a device to wrap gold foil around the top, another addition this year.

He no longer drives his own distribution runs, a relief from the long hours in the truck spent traversing Maine. 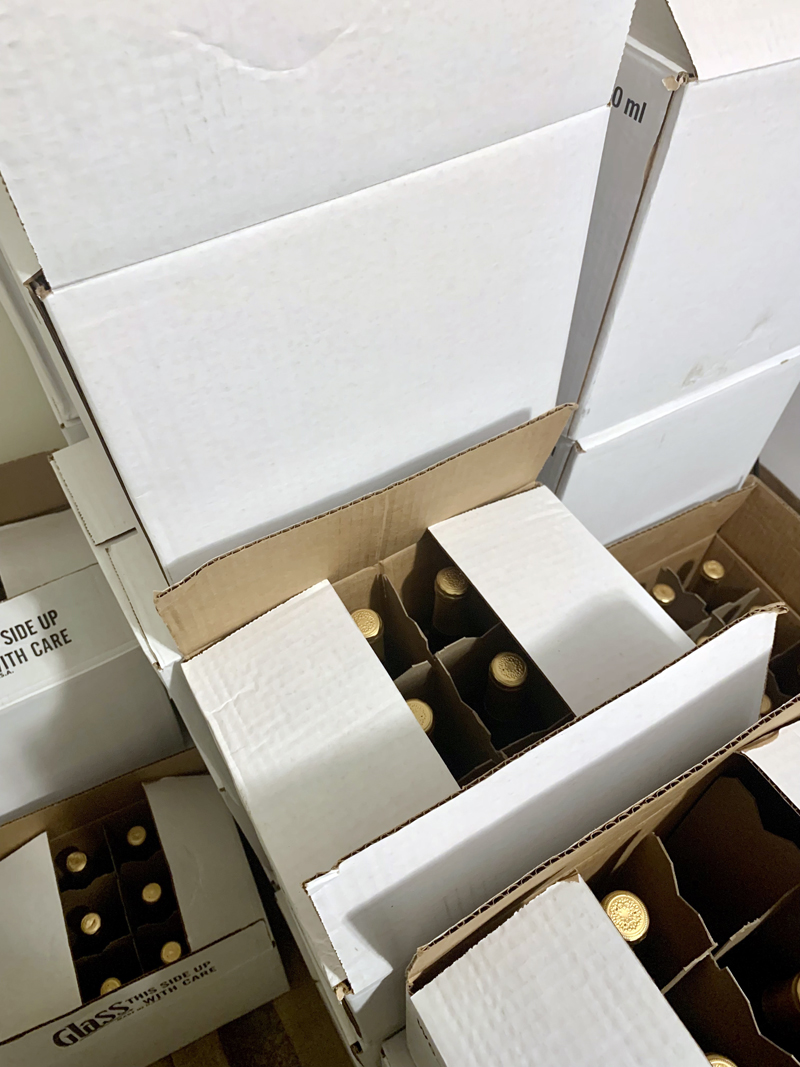 And, as of a few years ago, he can finally register his product as mead instead of honey wine with the state, as licensing language has adapted.

Bailey is an advocate for mead as much as he is an advocate for all small wineries, distilleries, and craft breweries in Maine. A map of the Maine wine trail – which includes Fat Friar’s – hangs in the tasting room above a display rack of mead.

“A lot of people are unfamiliar with how many wineries there actually are in Maine,” said Bailey, pointing to the map.

And having Oxbow Brewing Company down the road has actually been a big help.

“Newcastle can now boast its own distillery, a brewery, and technically I’m a winery, so you can do a pub crawl in northern Newcastle, who knew you’d ever be able to do that?” said Bailey.

In the tasting room – quiet on a winter weekday with no customers – Bailey painted the sheetrock walls to look like heavy slabs of stone. It’s a faux medieval tavern. There’s a red and black bar with old coins sealed into it, a wall-sconce. Custom mugs made out of cow horns, two axes crossed on the wall, and the overall sensation of time travel.

Bailey is an avid Medievalist, studying old recipes and participating in local groups that share the same interest. He’s ready for another time travel, too: To the spring.

“We’re anticipating spring will be busier. We’re doing the Bath winter markets this year, too,” said Bailey. But the tasting room won’t officially reopen until…well, “as soon as the ice is gone.” Bailey expects Mother’s Day.

For now, the little tavern is open informally and by appointment.

“If someone calls me up, I’m happy to open up for them,” said Bailey.

While Bailey finds support in other local wineries, distilleries, and breweries, he still wishes more people knew about Maine’s wine scene, including restaurants that consider themselves farm-to-table.