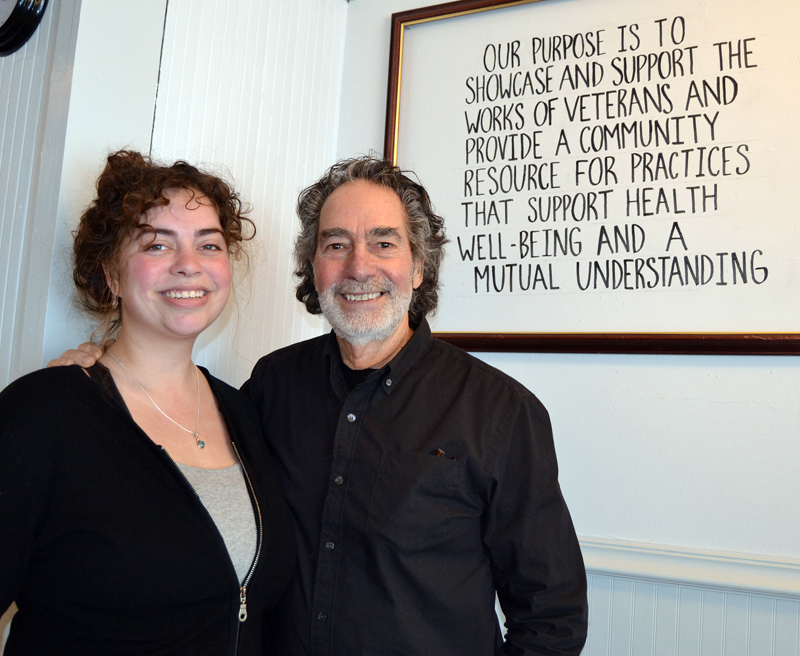 Olivia and Bernie DeLisle stand in front of The Peace Gallery’s mission statement written on a whiteboard in its 122 Main St. headquarters in Damariscotta. The father and daughter opened the space earlier this week. (Maia Zewert photo)

On March 13, Bernie DeLisle and Olivia DeLisle removed the brown paper covering the windows at The Peace Gallery, a collaborative focused on showcasing art and craft by veterans and providing a community space to support health, well-being, and understanding.

The seeds of what would become The Peace Gallery, located at 122 Main St. in downtown Damariscotta, were planted half a decade ago when Bernie DeLisle attended a program at Haystack Mountain School of Crafts in Deer Isle. The school, which has a mission of connecting people through craft, was hosting the program for veterans.

“It was the first time I ever did something like that, but it was a profound experience,” he said. “And I just have sat with that over the years … it just kept percolating.”

The dominoes recently fell into place to turn the idea into action. Midcoast Yoga Shala, where Bernie DeLisle was a regular, closed, and he and a friend were discussing how they needed to find a new space to practice.

Not too long after, he received a phone call from the owner of 122 Main St., informing him the space would soon be available. The storefront has special meaning for the DeLisle family, as it was home to their hat-and-accessory shop Darling and DeLisle about a decade ago. 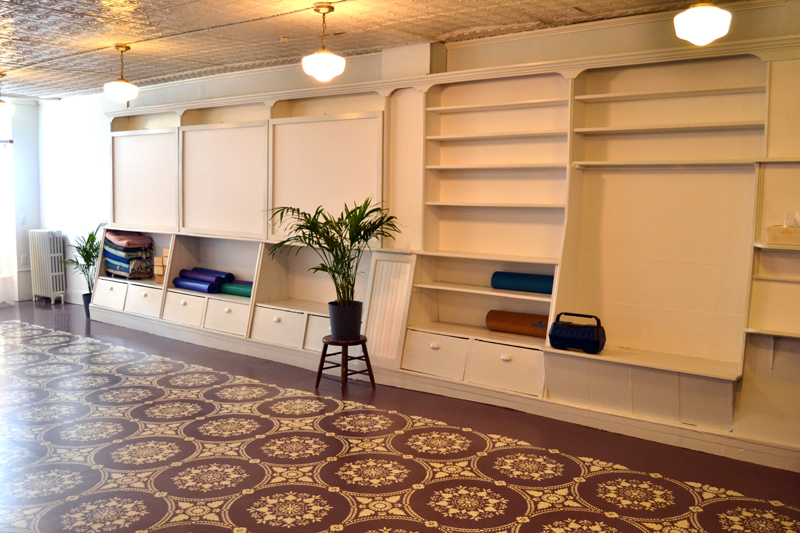 The interior of The Peace Gallery in Damariscotta. In addition to displaying veterans’ art and crafts, Bernie and Olivia DeLisle will use the space for movement courses, group meetings, and other community gatherings. (Maia Zewert photo)

“It was like the universe was saying, ‘well, here it is,’” Bernie DeLisle said.

The Peace Gallery will display pieces of artwork and fine crafts created by U.S. veterans from across the nation. Submissions are currently being accepted for the debut show, which will have an opening Memorial Day weekend. The gallery will take a small commission of 25%, which it would use to fund programs and initiatives.

The singular request is that artwork is nonpartisan, Bernie DeLisle said. “For this place, it’s about … the individuals, not organizations,” he added.

However, the display of veteran-made fine arts and crafts is just one prong of The Peace Gallery’s mission. Olivia DeLisle, Bernie’s daughter, immediately jumped on board to organize community use for the storefront’s open space.

“I’ve been dying to have a space in the community where people could get together and learn from one another,” Olivia DeLisle said. “We’re all tradesmen in our own way, and I think having a space where people can teach each other their various skills in an open, centralized location is invaluable.”

With yoga classes already a given, other ideas include barre classes, park-style chess nights, standup comedy, a drum circle, fly-tying, and more.

“My vision is when (people) are at home and getting cabin fever, they can hit the website and see the calendar of events of what’s happening at The Peace Gallery,” Bernie DeLisle said. “We hope to have enough that there’s something constantly going on.”

“There’s so many possibilities here and ways to use the space,” Olivia DeLisle said.

The Peace Gallery also provides a location for two other nonprofits. Ron Capps, founder and director of Veterans Writing Project, will host creative writing and songwriting workshops for veterans and their family members. Soldiers, Songs, and Voices, a nonprofit organization that provides free instruments and songwriting lessons to veterans as a form of post-conflict care, will operate a Midcoast Maine chapter out of the space. 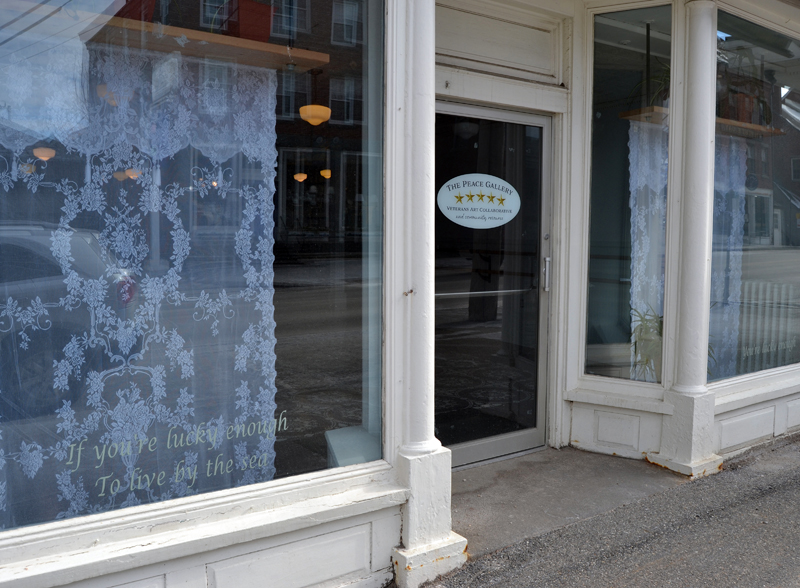 “We want to help create conversations and have a place where everyone feels welcome,” Olivia DeLisle said. “Some of the programs are veteran-oriented, but the space is for everyone.”

Bernie DeLisle recognizes the important work for veterans that foundational local organizations have and continued to do. “We want to be a complement… and offer additional resources,” he said.

Use of The Peace Gallery is available for donation. Coffee and tea are available, and the space is alcohol-free.

Getting the initiative off the ground has been a true community effort. Mac Walton, who used to work for Bernie DeLisle at Van Lloyd’s Bistro and is now a lawyer, drew up the nonprofit paperwork pro bono through the law firm Drummond Woodson. David Begin, one of the first people Bernie DeLisle met when he moved to the area, is the treasurer for the organization.

Capps, Andrea Parker, Shawn Puckett, and Annie Richardson all signed on for the board of directors.

Jenny Mayher, who introduced Bernie DeLisle to Capps, designed The Peace Gallery’s logo. Almost every member of the DeLisle family pitched in to prepare the space or stencil the ornate design onto the newly painted floor.

“We’ve already gotten so much help from people that it doesn’t feel like we’re taking on all that much,” Olivia DeLisle said. “The most important thing is that this benefits people.”