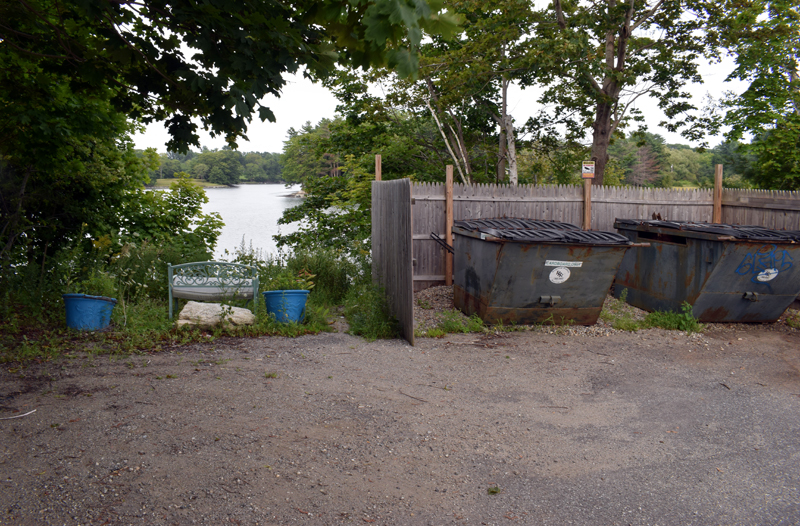 J & J Jamaican Grocery and Gift Shop has received permission from the town of Damariscotta to use the space to the left of the dumpsters, at the end of Griffin Lane, for operation of its food smoker. The store will relocate the smoker and begin cooking food from 11:30 a.m. to 3 p.m. on Saturday, Aug. 21. (Evan Houk photo)

The smoker currently sits in front of the grocery store at 88 Main St. Permission has been granted from the town for the store to use the last parking space on Griffin Lane as a location for the smoker and its operation from 5 a.m. to 8 p.m. any day of the week.

The space is in the back of the parking lot next to two Dumpsters and the Damariscotta River bank, approximately 230 feet from J & J’s storefront.

J & J co-owner Keleen Watson said on Tuesday that the store was planning to cook food on Sunday, Aug. 15, but decided to wait until the upcoming weekend to fire up the smoker.

Peter Ebanks, J & J’s other co-owner, said on Tuesday that food would be available at the store on Saturdays and Sundays from 11:30 a.m. to 3 p.m. or until it’s sold out.

Ebanks said he would move the smoker on Saturday, but he is not satisfied with the new location.

“Now I have to cook next to a Dumpster,” Ebanks said.

He said he gained approval for the smoker to be located outside his building facing Main Street from the Damariscotta Planning Board and the Historic Preservation Review Commission and does not understand how a few complaints can derail his plans and prior approval.

Ebanks noted that the complaints were issued on a Saturday when the smoker had to be cleaned and produced more smoke than it did from cooking the next day.

“There was barely any smoke,” Ebanks said of the cooking on Sunday, Aug. 1, the day he received a cease-and-desist letter from the town and had to stop the smoker’s operation.

Waltz said by phone on Tuesday, Aug. 17, that he is working to discover if the town has a right-of-way to the parking space at the end of Griffin Lane, close to the riverside, or if Bangor Savings Bank owns it. He said that either way, J & J Jamaican Grocery now has permission to use the smoker there, as long as it is not underneath the tree at the end of the parking lot.

Waltz said that because of the complaints filed about the smoke from neighbors and the smoker’s violation of fire code, it cannot stay where it is currently located next to the building, or on the deck of the grocery store.

He said that the smoker was in violation of fire code by being within ten feet of a wooden structure, whether the building or the deck, and that the only option left is the parking space at the end of Griffin Lane.