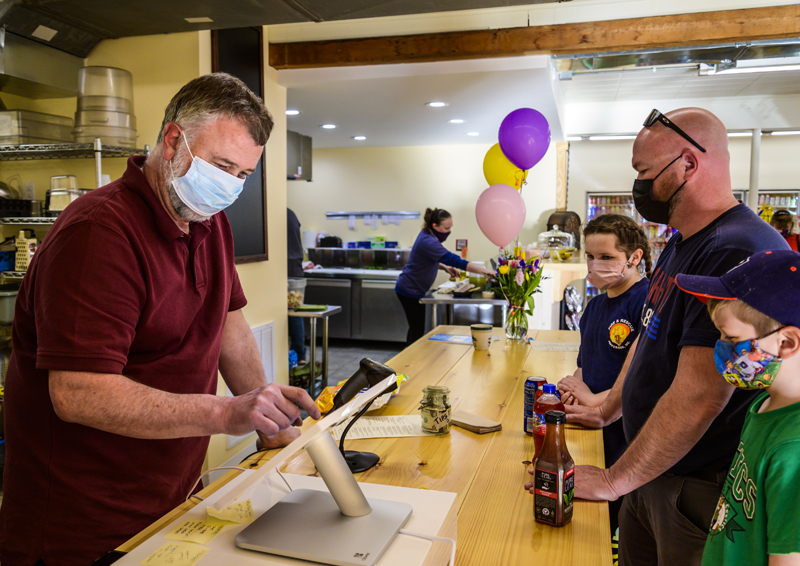 The exterior of the 1880 building at 242 Waldoboro Road shows small changes — new decals in the window, a specially designed entry step. But the inside feels completely new. Bright wood floors, panels, and ceiling beams embrace and magnify the natural light. Congratulatory flowers in yellow and purple and white greet customers as they enter.

An extensive cooler is filled with cold drinks — soda, juice, water, and beer. A display case along the wall features a selection of local wines.

There’s an ice cream chest and a small coffee station. White metal shelves hold an array of snacks, although many of the shelves are still waiting to be filled.

The small kitchen gleams with new appliances where Caleb Farrin and Samantha Maynard work the grill and the sandwich counter. Menus are being printed as fast as customers can take them.

“It’s been a year-plus project — it’s quite a transformation,” Caleb Farrin said.

Jefferson Market had closed without warning in February 2018 and the building went into foreclosure. Wayne Farrin, the owner of Damariscotta-based Farrin Properties and a Jefferson resident, bought the building in June 2018, with plans to lease the space. But eventually he and wife Lynn Farrin decided to take on the business themselves.

Lynn Farrin is the driving force behind it all. She said they had begun renovations after they purchased the building with the intent of fixing it up to rent. They had an interested party at one point, but when they backed out, the Farrins put the brakes on the renovation.

Later, they “just started picking away at stuff in a sort of weekend warrior style and started to think, ‘This is a fun little place,’” Lynn Farrin said. “You start falling in love when you work on it.”

Lynn Farrin called it “our pandemic project.” She started to come in and work half-days on Saturdays. She kept an eye out for tastefully mismatched furnishings. She began to notice quaint items on digital marketplaces, like “that cute little stove for the coffee.”

Last summer they started doing more significant renovations. Lynn Farrin said that she would hand a sketch to builder Scott Brooks and he would make it happen. “He gets the vibe,” she said.

She used found beams and tried to keep the original character of the building where she could. A teacher for 17 years, she hired former students to do some of the work, like the plumbing and the decals on the door.

Around the holidays, she started to think seriously about taking the project on herself. Her son, Caleb Farrin, a cook at The Narrows Tavern in Waldoboro, helped plan the kitchen layout. In February, he started thinking about menu ideas. He gave his notice to The Narrows.

According to Lynn Farrin, everything started to come together when her son came on board. “I wouldn’t have done it if he had not agreed to come in,” she said.

Lynn Farrin said that Samantha Maynard reached out to her. “She had been a cook at Deb’s Diner and knows how to do breakfast,” she said.

“We definitely want feedback,” she said. “People have said they want pizza, so we may look into a pizza oven.”

According to Lynn Farrin, the store ran out of just about everything on opening day. Reached by phone on Friday, she said, “We way underestimated the response to the opening.”

While she described Friday as steady, they still had to close early — the kitchen ran out of menu items. They closed early Saturday too.

Lynn Farrin said she would love to be open from 6:30 a.m. to 7 p.m., then stay open until 9 p.m. through the summer. But hours right now are subject to change as the family adjusts to the demands of the business and makes plans to hire additional help. “We need to do it quicker than we thought,” she said.

She said that eventually they will figure out the grocery side of the business, noting that a lot of companies want huge commitments at startup, but they don’t yet know what the demand for groceries will be. “We know we’re not Hannaford,” she said.

They want to carry a lot of Maine products and have a produce case to feature the bounty of local farms. “We’ll grow the business as we can,” Lynn Farrin said.

“I want to keep it friendly and relaxed, a place people can come, sit down, and have a coffee,” she said. A deck along the side of the store looks over Davis Stream, where customers can watch eagles, ducks, and beavers as they swim and dive.

“My daughter’s boyfriend plays guitar and said this would be a cool place to play music,” Lynn Farrin said. She expects to see boat traffic, people coming up from nearby Damariscotta Lake to get a sandwich.

She hopes to add an awning and a sign over the window. String lights will be up soon on the deck.

Barbara and Jim O’Halloran visited the store on opening day and said, “It’s wonderful to be here. We’ve waited a long time for this and it looks fabulous. We’ve lived in Jefferson our whole lives and we’re super excited to see the store opening back up. We miss it a lot.”

Samantha Adolphsen, of Waldoboro, said, “I’m so excited that there’s a place I can buy coffee that’s only five minutes away. It’s nice to have someplace close to home. I couldn’t wait to come here this weekend and eat breakfast and look at this view. It blows any expectations I had out of the water.”

Diane York said, “I’ve been waiting for the store to open since it closed.”