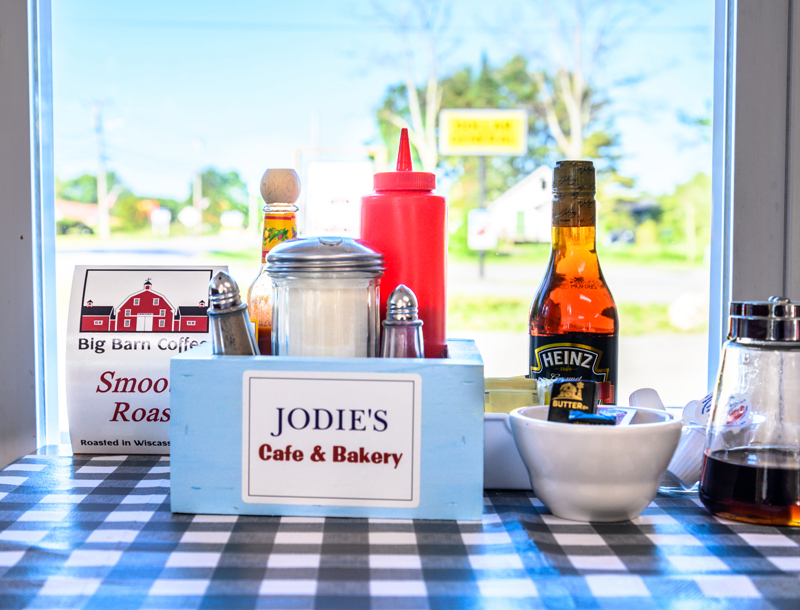 Condiments and menu cards await diners at Jodie’s Cafe and Bakery in Wiscasset on Tuesday, June 14. The restaurant’s proprietors came to the area from Georgia and are bringing some Southern flavors to New England dining. (Bisi Cameron Yee photo)

Jodie’s Cafe and Bakery opened in Wiscasset on May 24, bringing a bit of the South to these Northern climes.

Owner Jodie Roquemore moved to the area from central Georgia in 2020 drawn by the milder summer climate. Opening the cafe and bakery, her first business, is the culmination of a dream that started when she first began baking at the age of 10.

Most of her cooking skills were learned from her coastal South Carolina mother, Roquemore said, along with most of her manners. She wants to offer diners a taste of the South, not just with Southern cooking, but with Southern hospitality.

While the menu is not specifically Southern, there are several signature dishes that represent Roquemore’s roots.

“We do have grits that I make every day. They’re really awesome grits,” she said. A shrimp po’boy with a chipotle aioli is one of the lunch offerings, as is shrimp and grits finished with a buttery Cajun sauce and bacon crumbles.

There are occasional treats like banana pudding to further tempt lovers of Southern food.

Roquemore wants to eventually introduce Mainers to a low country boil typical of the South with red potatoes, corn, shrimp, and smoked sausage all cooked in a large pot with Old Bay seasoning.

Roquemore and Bellefleur collaborated on the menu with Bellefleur bringing her baking skills to the table. Pastries, breads, and doughnuts are all made in-house.

The corned beef hash is one of the most popular items on the breakfast menu. It’s made in-house, cooked low and slow alongside home fries. Roquemore said she eats it every day. The breakfast burrito and breakfast quesadilla have their fair share of fans as well, she said.

Lunch favorites include the chicken bacon ranch wrap, served fried or grilled, and the corned beef Reuben. Roquemore said red hot dogs, a Maine classic, will soon take their place alongside the burgers and fish and chips on the menu.

That menu is still a work in progress, Roquemore said. Some items are made in small test batches to gauge customer interest. She hopes that specials, like a recent summer salad with fresh berries and candied pecans, will become a regular feature, allowing her staff to stretch their culinary skills and imagination. At some point she hopes to offer barbecue.

Featuring local products is one of those ideas. Roquemore said they source eggs from Bowden’s Egg Farm in East Waldoboro, fish from the Mill Cove Lobster Pound in Boothbay, and they serve coffee from the Big Barn Coffee Co. in Wiscasset. “It’s good business,” she said of partnering with hyperlocal providers.

Jodie’s Cafe and Bakery is a friends and family affair, which is fortunate in the current environment when many restaurants are struggling to find staff. Roquemore’s brother works in the kitchen and her children often help out as well.

“I’m so thankful I have this huge network of people able and willing to work,” she said.

Roquemore purchased the property at 277 Bath Road in Wiscasset, former home of the Hot Spot Diner and the Ship’s Chow Hall at the end of 2021 and spent the next six months remodeling the space.

She said it took longer than anticipated to get the cafe up and running. Initial plans to open in February hadn’t taken the impact of weather into account. She had to wait for warmer weather to complete the remodel.

“We worked pretty hard on it,” she said. The open floor plan is part of her vision with a straight shot from the door to the counter, unimpeded by tables, at least for now. Red padded booths line the walls, covered with retro vinyl checked tablecloths.

A newly built deck on the side of the building will welcome outdoor diners soon, she said. While the deck may be a seasonal fixture, Roquemore plans to be open year-round.

Kathryn and Scott Mullen already have a regular table at Jodie’s Cafe and Bakery. Kathryn Mullen said she is working her way down the menu and is almost through the breakfast offerings. She’s a fan of the eggs Benedicts and omelets. Scott Mullen liked the warm mango coconut donut, one of the several donut flavors in daily rotation.

The pair appreciate the welcoming atmosphere, what Kathryn Mullen called that “Norm from ‘Cheers’” feeling.

“There’s definitely a need for a breakfast restaurant around here,” Roquemore said. With locals traveling southbound to Bath Iron Works and tourists traveling northbound into Wiscasset and beyond, she is in a good position to capitalize on the traffic at her door.

Jodie’s Cafe and Bakery is open 6 a.m. to 2 p.m. every day except Thursday. For more information, find the business on Facebook.