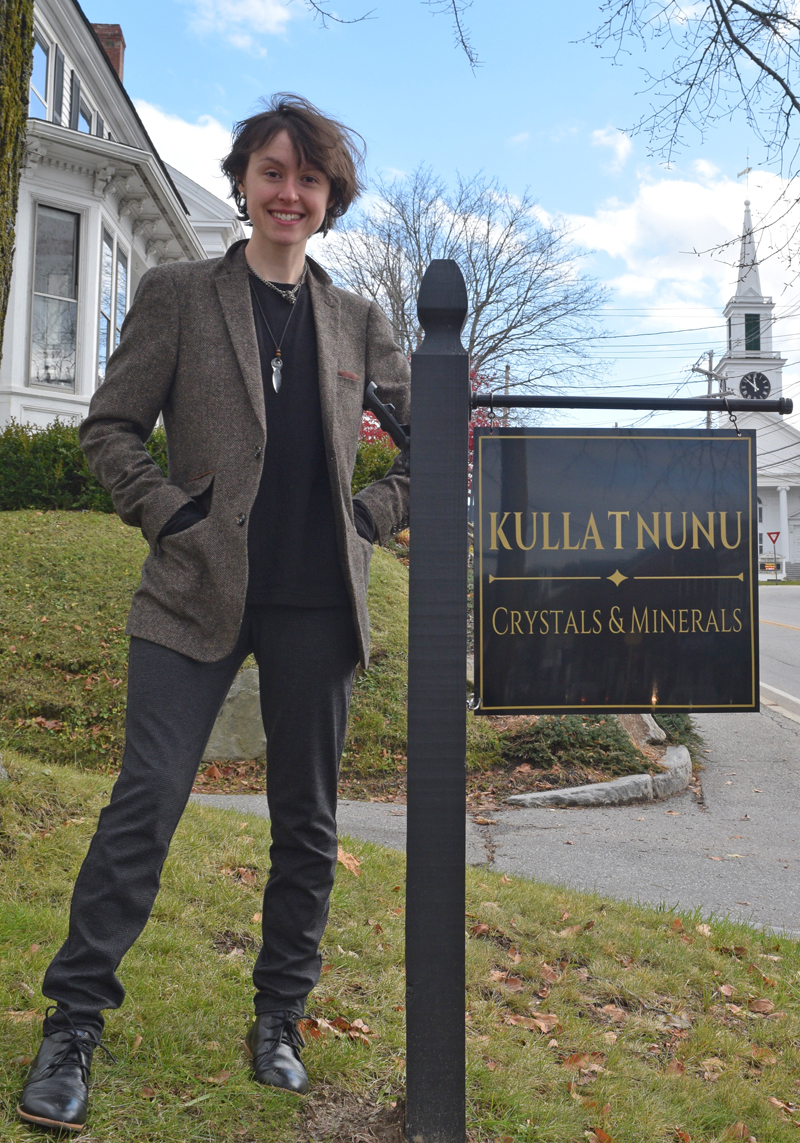 Lillian Christine of Alna outside of their crystal and mineral business storefront at 202 Main St. in Damariscotta on Oct. 5. With a connection to the town via Lincoln Academy, Christine always considered owning a business in the downtown district to be a “pipe dream.” (Nate Poole photo)

Damariscotta’s Main Street has a new young business owner on its hands, and their entrepreneurial vision is crystal clear.

Lillian Christine, who uses they/them pronouns, opened Kullat Nunu at 202 Main St., on Oct. 5. A native of Alna who attended Lincoln Academy, opening a brick and mortar storefront in downtown Damariscotta has always been a “pipe dream” for the 28-year-old.

“I always jokingly tell people when they ask where I live I’m like, ‘Oh, you know, I live in a town out of like a Hallmark movie’,” they said.

After earning a bachelor’s degree in English and cognitive philosophy from Bates College in 2015, Christine moved to Portland for a number of years to work in the hospitality industry, but they always knew that they wanted to be their own boss.

Figuring out what kind of business they wanted to own was up in the air until 2017 when, one day, Christine wandered into a crystal shop on Congress Street in Portland and bought a Tiger’s Eye palm stone.

They began selling crystals online in September 2019; Christine named the business Kullat Nunu because they are a Pisces, and Kullat Nunu is the ancient Babylonian name for the brightest star of the Pisces constellation.

In the summer of 2021, they noticed that a space at 202 Main St. was available for rent. It was not long before Christine had a look and quickly decided it would be the spot for their first storefront.

“So it was kind of a moment of the stars aligning in that this space was available in Damariscotta and it was downtown,” they said.

Having spent much of their youth attending school in Damariscotta, Christine feels a fair bit of nostalgia for the town, and the welcome that they received from the chamber of commerce and other businesses only amplified that feeling.

“The people here in general are so friendly. I’ve just been overwhelmed with how sweet and supportive everyone’s been, everyone from local business owners to just people who come in because they’re curious about what I’ve been doing,” they said.

Christine said that has been good since the shop opened, so much so that they ended up having to restock their inventory after only two weeks. In that time, they noticed that one gemstone in particular, carnelian, had been selling at a much higher rate than they anticipated.

They said that this may be due to a trend on TikTok in which users are purporting to have experienced an uptick in romantic connections due to the stone’s properties. 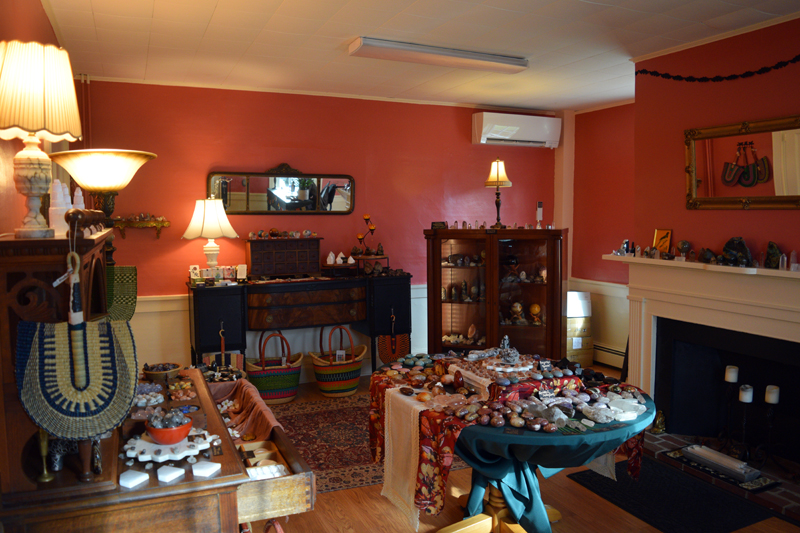 Damariscotta’s Kullat Nunu has a small storefront, but it boasts a dense and varied selection of crystals and minerals. (Nate Poole photo)

While they don’t know much about TikTok, Christine said that the gem may also be popular due to its burnt red-orange color which invokes pleasant fall colors.

Christine said that they are interested in both crystals’ geological significance, as well as their energetic and spiritual significance, and are happy to discuss both subjects with curious customers.

“I have a lot of people who are into reiki and energy work… who come in for the spiritual aspects of crystals, and I have other people who come in who look at things and they go, ‘Oh, this is just a really cool rock’,” they said.

Christine also makes lots of recommendations for those starting their own stone collection. They said that the “starter pack” often consists of clear quartz, rose quartz, amethyst, selenite, and one black stone, like an obsidian or black tourmaline.

However, they noted that selecting a stone can also be a beneficial opportunity for introspection.

“I always tell people to use it as an exercise in intuitively connecting with what you feel you need in your life right now,” they said.

With so many crystals packed into an old New England home, Christine does believe that they may have attracted a slightly spookier clientele than what they were expecting.

One night, they were tidying up the shop and preparing to leave after everyone else in the building had left when they noticed something strange.

“It was like someone walked by me with a cup of Earl Grey tea. I smelled Earl Grey tea so strongly, and it blew right past my face,” Christine said. 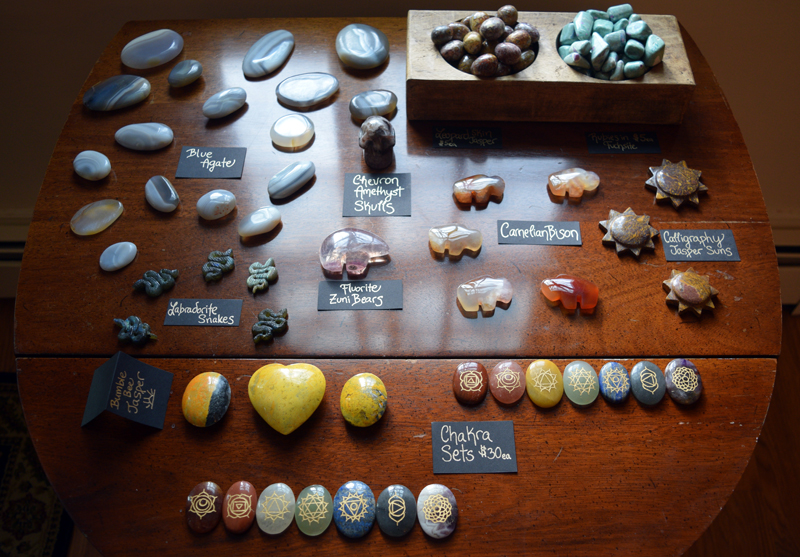 They supposed that it might be the ghost of one of the house’s old occupants, as Christine’s business is located in a sitting room where a long passed governess may have once enjoyed a cup of tea. However, Christine admitted that there may have also been another explanation.

“Ten minutes later, I smelled lemon drizzle cake. Which could be the fact that Barn Door Baking is right next to me. Not going to lie, could be that,” they said.

Christine’s experience as a first-time brick and mortar business owner has been immensely positive, but they said that one challenge has been learning when to take time off.

“It’s very easy when you work for yourself to not turn off the work mode,” they said.

However, Christine said that finding new crystals and minerals to stock up on rarely feels like work.

Kullat Nunu will always be evolving, and they are hoping to diversify the store’s stock for the Christmas season. Having just had a very successful Early Bird sale, they are optimistic for the future of Kullat Nunu.

“It is like taking a leap, but it also gives you such an incredible sense of independence too, and that’s wonderful to have,” they said.