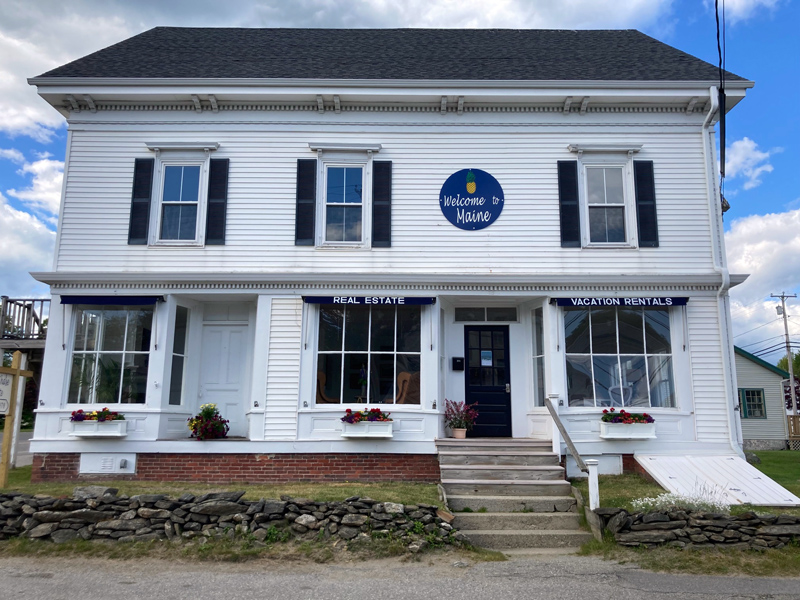 After many years “on the hill” in New Harbor, the offices of L. Dewey Chase Real Estate have been renamed, relocated, and re-imagined.

Now known as L. Dewey Chase Real Estate and Rentals, the business has set up shop in a beautifully remodeled space once known as the “Olde Post Office Shop,” at 2574 Bristol Road, New Harbor, across the street from C.E. Reilly and Son.

Founded by Dewey and Bea Chase in the early 1990s, the “on the hill” location quickly became a hub of activity as Dewey focused on real estate sales and hired additional brokers while Bea operated Harbor Ice Cream and began an area cottage rental service.

Bea Chase hired McLain to help run the rental business in the late 90s. Together, the two expanded the business to over 75 rentals. They developed a close personal relationship and Chase ended up selling the business to McLain in 2007 so she could focus on Harbor Ice Cream and other businesses.

Unfortunately, both Bea and Dewey experienced health issues at the start of the pandemic and Bea passed away last summer. Dewey has since retired and settled into a comfortable senior living facility.

Daughters Jennifer and Jessica Chase were left to take over their parents’ various businesses. However, neither daughter lives in the area full time, so it was not feasible for them to operate the real estate business long-term. However, they knew who would be ideal to take it over – Sheila McLain.

According to Jenny and Jessie, “Sheila is an experienced businesswoman and unbelievably hard worker. She already owned and operated the rental business when we approached her to take on the real estate side and she accepted! She is now a partner in the company and the operating director for the newly formed business joining the real estate and rental businesses under one umbrella. We know our parents would be proud of what they built and having Sheila at the helm.”

Future plans for the business include hiring additional real estate brokers and expanding the business to include care taking services. Also planned is a restoration of the building and a rebranding of the company, but for now, it will operate as L. Dewey Chase Real Estate and Rentals.