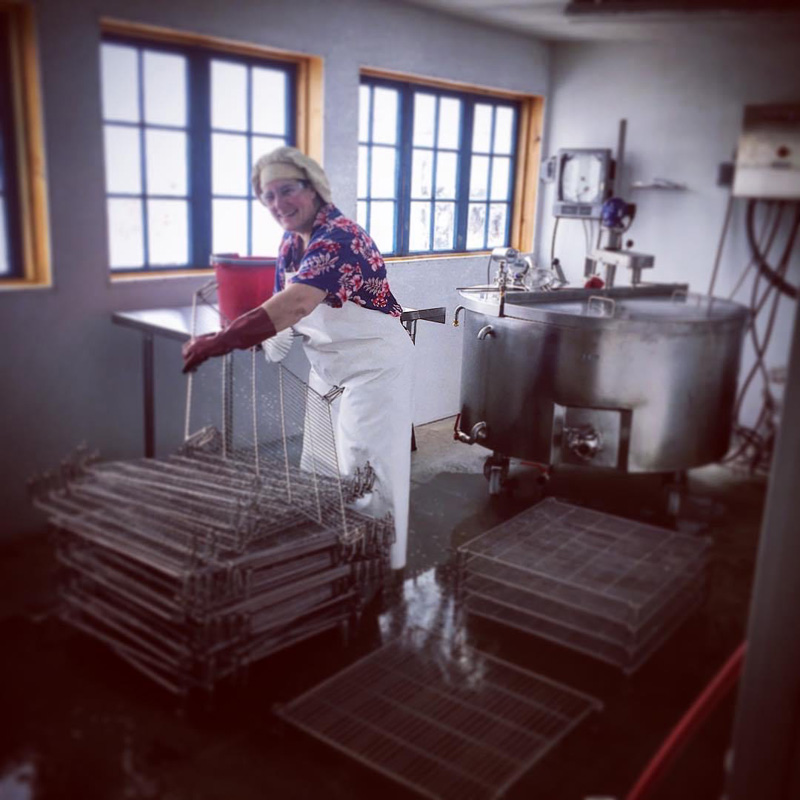 “All of my cheeses are made by me, by hand, so to make the Rockweed, I ladle the curd into the bottom half of the form, sprinkle the surface with the powdered seaweed, then fill the rest of the form with curd,” said Allison Lakin, owner and operator of Lakin’s Gorges Cheese at the East Forty Farm in Waldoboro.

“It then sits to drain the whey (the liquid) for three days, before going into the temperature and humidity-controlled cave for one month,” she explained. “When it is ripe, it has a nice cream line toward the outside edge and is slightly firmer in the center. Like all bloomy rind cheeses, the rind is edible and should be eaten with the paste of the cheese.”

Online, capital letters read “SOLD OUT” next to an image of the sea-inspired cheese. The creamy inside oozes against a white rind, the line of seaweed visible cutting across the center. If the cheese is sold out, don’t worry: There’s more ripening now and available weekly, with an email list to hop on to ensure you’ll get a taste.

Also prior to this award, Lakin said, “I only owned 120 forms to make this cheese – which is a roughly four-inch square that weighs about a half a pound.”

After recent publicity, she said she was finally able to purchase more cheese forms.

“I am now making 250 at a time,” she said. “But they take one month to age, so people need to be patient if they keep finding the cheese sold out – more is coming!

“It has also led to an increase in overall sales for all my cheeses, which is wonderful. Cheese buying in Maine has some peaks and valleys, with summer and the holidays being the peaks.”

She described this time as “an unusual early spring peak,” thanks to the award.

But she said biggest impact of the recent recognition is trying to make sure wholesale customers get what they’re used to getting, as “orders went from customers wanting 100 a week to wanting 500 a week.”

The change was welcome after a hit to business in 2020.

“I am still rebuilding my business after the hit I took during 2020, when I lost 85% of my business, including two regional distributors,” said Lakin. “My model did not include selling at farmers markets, so I did not have an easy transition to sell directly to consumers.”

In response, she created “the list that became the Cooperative Extension Maine Farm and Seafood Products Directory … I also launched the Long Cove Farmers Market, here at the farm, and this will be the third year.”

Rockweed Cheese, aged using bladderwrack seaweed and milk from her dairy cows, was born from a desire to create a place-based cheese. It also figures into a growing interest in seaweed as part of Maine’s “blue economy” and culinary signature.

“When I relocated my business from the space I rented at the State of Maine Cheese Company in Rockport to my farm in Waldoboro, I wanted to create a new cheese that reflected a taste of place,” Lakin reflected.

The place, she described, is storied, weathered, and replete with a deep sense of history and time – and ecology.

“The farm was built by the Sweetland family in 1774 and has been in continuous operation since. Originally, it stretched from the Goose River to the Medomak River, but today it only retains the connection to the Medomak at Long Cove, which, like all of the Maine coast, has seaweed covered rocks,” she said. “I knew that was the taste to incorporate in the cheese.”

So Lakin contacted Maine Coast Sea Vegetables in Hancock to talk about her idea to develop a seaweed-inspired cheese.

“(T)hey sent me a sampler of different types of seaweed in different states (like flakes and powders),” she recalled. “First, I tasted all of the seaweeds and thought about what other seaweed foods were being made in Maine.”

Then, for the next six months, Lakin experimented. She created, observed, and sampled a few aged cheeses and a few soft cheeses, each using different seaweeds, as they aged.

“I decided that a soft ripened cheese with a ribbon of powdered bladderwrack in the center was both the most aesthetically pleasing and the tastiest,” she said. “The bladderwrack has a mild, briny flavor with an identifiable ocean aroma, which pairs wonderfully with the creaminess of the paste of the cheese.”

An anthropologist by training, Lakin has spent many years in cross-disciplinary education programs in museums, including maritime museums. Some of this work has been in historical interpretation. Interpretation and re-interpretation became central to Lakin’s cheesemaking.

“Over the years, my passion for non-traditional education, science, art and food was able to be reinterpreted as a cheesemaker,” she said. “Cheese is, at its essence, a way of preserving food. Coming from maritime museums, I have often told the story of shipboard food, which included cheese.”

She referred to cheese as a “part of everyday existence – from mac and cheese to pizza, to unique artisanal cheeses.”

And part of that history, one of preservation, also pertains to the land.

“When I think about the history of this farm and the work that has been done here, I like to think of the continuum of using the land in a sustainable way,” she said.

“As we do the work to improve soil and forest health, we are also improving the health of the livestock, which in turn will produce better cheese, pork and beef. Respect for the land use and its vital connection to the cove, which is actively worked by local clammers, we are always mindful of not having a downstream impact,” said Lakin. “The seaweed is also telling part of the story of the history of this area, which has both a maritime tradition and a fisheries tradition.”

As of this year, all the milk she uses will come from cows on her farm. Though Lakin doesn’t harvest her own seaweed yet, she plans on learning. Sometime.

“Eventually, I would like to learn how to harvest and process the seaweed myself, from the shore here at the farm,” she said. “Since as of this summer 100% of the milk will come from my cows, it would be very exciting to also have the terroir of the seaweed.”

Those tempted by the seaweed cheese can find it at the Farm Store in Waldoboro, using Union Farm Drop, Daybreak Grower’s Alliance, on the Lakin’s Gorges website, in addition to retailers around Maine and Massachusetts, listed under “Where to Buy” at lakinsgorgescheese.com.

“I can also be found June to September at the Long Cove Farmers Market at my farm in Waldoboro,” said Lakin. “And I am joining the Damariscotta Farmers Market for the first time this year.”