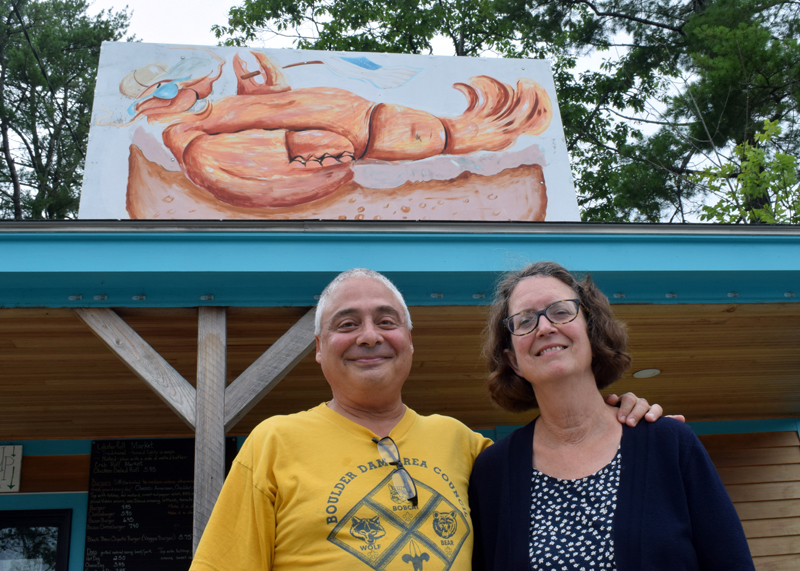 Billy and Barb Ganem, owners of Larson’s Lunch Box, stand outside the roadside eatery and the sign handpainted by Newcastle artist Glenn Chadbourne, on Tuesday, Aug. 10. The couple announced in a Facebook post on Sunday, Aug. 8 that they closed the business and will be selling it. (Evan Houk photo)

Larson’s Lunch Box, a local favorite since it opened in Damariscotta in 1962, has closed for the season and will be put up for sale by owners Billy and Barb Ganem.

“It’s really an institution that’s loved and part of the community. And we hope somebody will come along and keep it going,” Barb Ganem said, during an interview on Tuesday, Aug. 10.

The husband-and-wife team have owned and operated Larson’s for the past 16 seasons. They were originally planning to close on Sept. 30, but a series of events led them to announce the closure on Facebook on Sunday, Aug. 8.

“My sister got COVID in January and just passed away, didn’t make it,” Billy Ganem said.

He also said the main vendor for Larson’s Lunch Box recently raised the delivery limit for an order from $400 to $1,000, creating supply issues for the small shop.

After returning from Florida, where Billy Ganem’s sister lived, late last week, the couple decided it was time to hang it up. 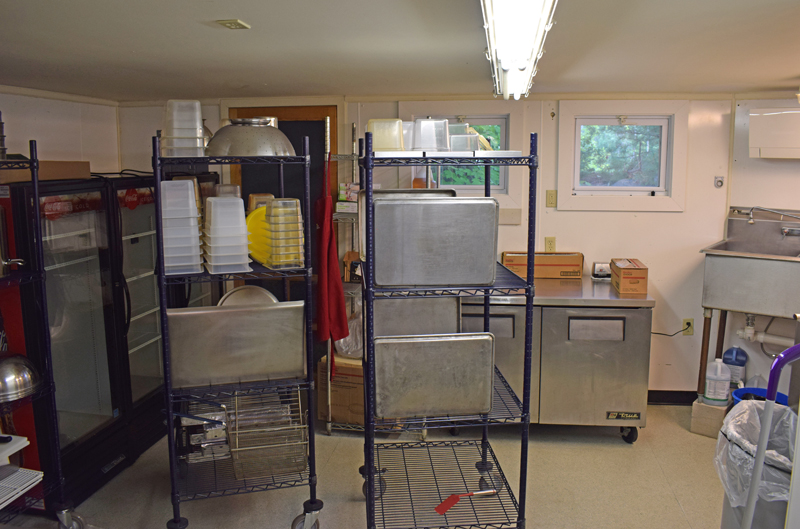 A kitchen prep and storage space was added to the original Larson’s Lunch Box building in Damariscotta shortly after owners Barb and Billy Ganem took over in 2004. The Ganems announced on Sunday, Aug. 8 that Larson’s is closed and they will be selling the business. (Evan Houk photo)

“My heart was just not in it anymore. And seeing that by the time we got back, there were only six weeks left in the season, we just thought it was time,” Billy Ganem said.

The incredible pace of business also took its toll on the Ganems, who described the roadside stand as “chaotic” this summer season.

After a record year last summer, this June fared even better, even though Larson’s was open for 55 hours less than June 2020.

Larson’s Lunch Box has seen many changes through the years, including the addition of a prep and storage space after the Ganems took over in 2004, the addition of clam chowder to the menu, and extensive and colorful renovations in 2019.

At least two things remain the same, however: An original painting by Newcastle artist Glenn Chadbourne still adorns the top of the building and the lobster roll remains one of the most popular items on the menu.

Billy Ganem said the painting came with the building and they used to take it down in the winter. One winter, two large pine trees fell, crushing the shed where the painting was stored, as well as the painting. 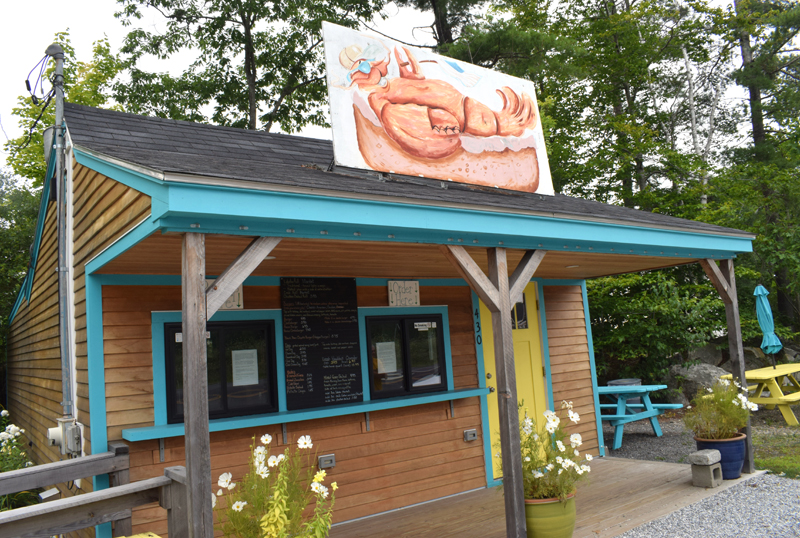 The Larson’s Lunch Box building in Damariscotta, which underwent extensive and colorful renovations in 2019, on Tuesday, Aug. 10. Owners Barb and Billy Ganem announced on Sunday, Aug. 8 that Larson’s is closed and they will be selling the business. (Evan Houk photo)

He said he called Chadbourne and asked him if he could make a new sign. 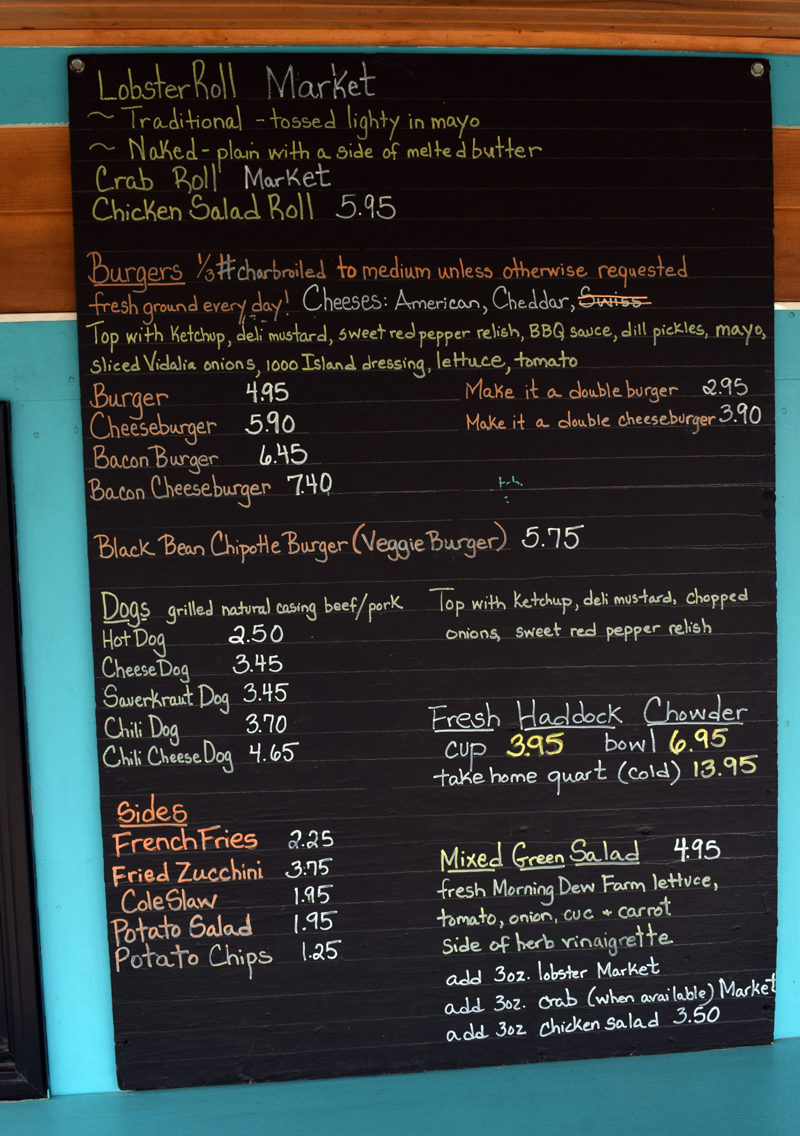 Larson’s Lunch Box menu in Damariscotta on Tuesday, Aug. 10. Owners Barb and Billy Ganem announced on Sunday, Aug. 8 that Larson’s is closed and they will be selling the business. (Evan Houk photo)

“He called us about a week or 10 days later and said ‘it’s ready.’ We went to his house, put it on the roof, came back, and insurance covered it,” Billy Ganem said.

The Ganems first visited Larson’s Lunch Box in the late 1990s at the urging of Billy’s father, who had a camp in Nobleboro. They were visiting from Plymouth, Mass.

Billy, who had worked in restaurants, remembers remarking how the roadside stand would be a nice place to own.

“I just liked the whole concept of it, the simplicity,” Billy said.

Five years later, while the couple was living in Nevada, they received a call from Billy’s dad, telling them that Larson’s was up for sale.

After looking at some other restaurants in the Wiscasset and Edgecomb areas, and although the Larson’s building needed considerable work, the Ganems decided to take it on.

Larson’s Lunch Box was founded in 1962 by Arthur and Mary Larson. The business was then passed to their niece, Suzanne Carney, who operated it for years before leasing the building to someone else.

The couple both said the part they will miss the most about running the business are the people.

“I feel bad letting people down. Because people are sad now. We’ll miss the people, they’re everything,” Barb Ganem said.

She said many customers would come for the conversation and friendly neighborhood interaction as much as for a crab roll or a burger.

The Ganems said they plan to stay in the area and stay involved in the community, even after selling the business.

“We want to work part-time and volunteer. … We want to be a part of the community,” Barb Ganem said.